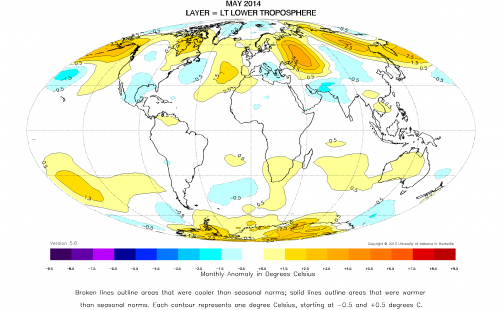 May 2014 was the third warmest May in the 35-year satellite-measured global temperature record, and the warmest May that wasn’t during an El Niño Pacific Ocean warming event, according to Dr. John Christy, a professor of atmospheric science and director of the Earth System Science Center at The University of Alabama in Huntsville. The global average temperature for May was 0.33 C (about 0.59 degrees Fahrenheit) warmer than seasonal norms for the month. The warmest May was in 1998, during the “El Niño of the century.” Temperatures in May 1998 were 0.56 C (about 1.0 degrees F) warmer than normal. May 2010 — also an El Niño month — was second warmest at 0.45 C (0.81 degrees F).

While May 2014 was not officially an El Niño month, indications are that an El Niño is forming in the eastern central Pacific off the equatorial coast of South America. Even if that El Niño is nothing spectacular, it might become a record setter simply because it is getting a warmer start, Christy said. “The long-term baseline temperature is about three tens of a degree (C) warmer than it was when the big El Niño of 1997-1998 began, and that event set the one-month record with an average global temperature that was 0.66 C (almost 1.2 degrees F) warmer than normal in April 1998.”

January through August of 1998 are all in the 14 warmest months in the satellite record, and that El Niño started when global temperatures were somewhat chilled; the global average temperature in May 1997 was 0.14 C (about 0.25 degrees F) cooler than the long-term seasonal norm for May.

“With the baseline so much warmer, this upcoming El Niño won’t have very far to go to break that 0.66 C record,” Christy said. “That isn’t to say it will, but even an average-sized warming event will have a chance to get close to that level.” 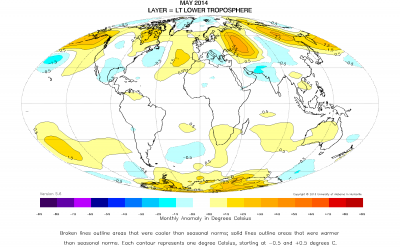