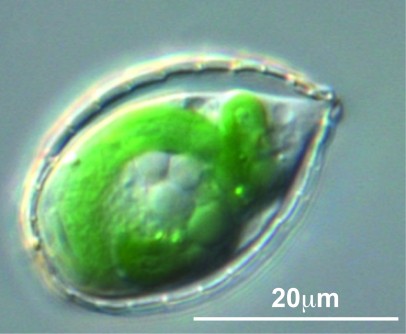 The amoeba, Paulinella, which has two large, sausage-shaped plastids for photosynthesis. 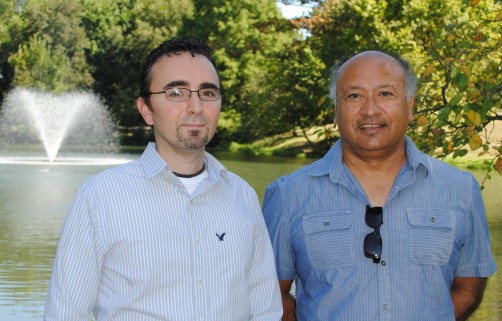 Newswise — About 100 million years ago, a lowly amoeba pulled off a stunning heist, grabbing genes from an unsuspecting bacterium to replace those it had lost.

Now Rutgers and other scientists have solved the mystery of how the little amoeba, Paulinella, committed the theft. It engulfed the bacterium, kept that cell alive and harnessed its genes for photosynthesis, the process plants and algae use to convert carbon dioxide into oxygen and sugar via solar energy.

“The major finding of the study is the microbial world, which we know is full of valuable genes, can move these genes between organisms according to need,” said Debashish Bhattacharya, a study co-author and distinguished professor in the Department of Ecology, Evolution and Natural Resources at Rutgers. “When a microbe has a gene deficit, it can in some cases fill that deficit by grabbing the same gene from the environment. This shows how fluid microbial genomes really are.”

“But people should not get the idea that humans will be grabbing bacterial genes any time soon, because they have a sequestered (protected) germ line,” said Dana C. Price, a study co-author and associate research professor in the Department of Plant Biology and Pathology in the School of Environmental and Biological Sciences. “This is about microbial life such as bacteria and single-celled eukaryotes.”

The international study by U.S. and German scientists was published online today in the Proceedings of the National Academy of Sciences.

The Earth is green because photosynthetic plants and algae contain chlorophyll, a green pigment that reflects green wavelengths of light. Their photosynthetic ability arose from a much more ancient theft committed some 1.5 billion years ago. Back then, an algal ancestor engulfed a photosynthetic bacterium, reducing it to a chloroplast, a plastid with chlorophyll. Plastids are organelles, which, like the organs in the human body, are structures that contain DNA and have specific functions, in this case photosynthesis.

The engulfing process is known as primary endosymbiosis, and it altered life on Earth by allowing the rise of animals that depend on plant life.

The theory of endosymbiosis has an interesting scientific history. In 1895, German naturalist Robert Lauterborn wrote a paper on Paulinella chromatophora, an amoeba he discovered, and his finding of plant cells inside the amoeba. It has two large, sausage-shaped plastids called chromatophores, which facilitate photosynthesis. Lauterborn suggested that this could represent the symbiosis, or collaboration, of two cells, and this discovery aided the development of the endosymbiosis theory.

For decades thereafter, however, scientists could not find or culture Paulinella cells from the environment. But about 20 years ago, a German scientist, Michael Melkonian, who Bhattacharya worked with, was able to get an isolate of the amoeba and cultured it in Cologne, Germany. Meanwhile, the science of genomics improved in recent years, allowing researchers to solve Paulinella’s mysteries.

In the new study, scientists led by Eva Nowack examined Paulinella to learn the rules of genome evolution that allowed photosynthesis to take hold and flourish. The rules could be revealed because the Paulinella endosymbiosis took place 100 million years ago, using the same process that unfolded about 1.5 billion years ago.

Using this unique model, the researchers asked a critical question about endosymbiosis that had dogged scientists for many years. It has long been known that cells kept inside other cells can no longer share DNA with their own species and tend to build up a lot mutations in their genome, leading to their demise.

This decay process is called Muller’s ratchet. So how did the captured plastid escape the ratchet after millions of years of imprisonment? Analysis of Paulinella genomic data showed that every time it lost a gene, the amoeba replaced it with another gene with the same function from bacteria.

“Evolution can find a way, in this case by solving the problem of broken genes by gathering replacement genes from the environment,” Bhattacharya said. “Who knows, in a 100 million years or so, the descendants of Paulinella might become the dominant plants on our planet.”

“It’s really remarkable that a paper written in a journal 120 years ago actually laid the foundation for this study,” Bhattacharya said. “It’s very rare that a species that is so hard to find and culture starts to play an important role in understanding fundamental processes in cells.”

The study was supported by a National Science Foundation grant and a Deutsche Forschungsgemeinschaft grant. 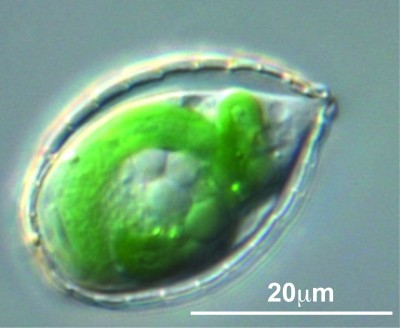 Caption: The amoeba, Paulinella, which has two large, sausage-shaped plastids for photosynthesis. 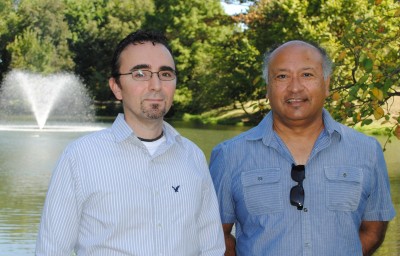