Chronic brain diseases such as epilepsy involve disturbances of the brain’s electrical activity. Finding new and better ways to correct them is the dream of millions of patients, their physicians and researchers. 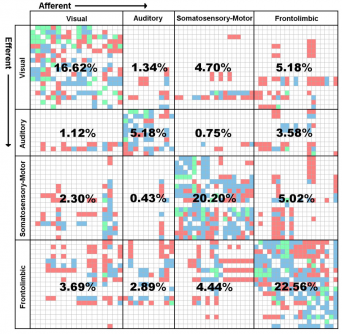 Density of connections between cortical areas classified as absent of connection (white), sparse (red), intermediate (blue), and dense (green). The percentages correspond to the amount of intra and inter connections in relation to the total connectivity matrix.

Newswise — WASHINGTON D.C., April 19, 2016 --An international team of investigators from Brazil, Scotland and Germany is expanding the research base on the brain’s complex suite of connections known as neural networks using computer simulations and a technique called cluster analysis. Basically, they built a computer model of a cat brain’s corticocortical network separated into 65 areas and connected by fibers of different densities. The areas were separated into four clusters, or cognitive regions: visual, auditory, somatosensory-motor, and frontolimbic.

The researchers subjected the computer model to seizure-like conditions and tested three different ways to control or avert seizure-like electrical patterns in the computer model. Their results appear in the current edition of the journal Chaos, from AIP Publishing. In it, the team reports results of its investigation into the specific seizure-related problem known as synchronization suppression using cluster analysis to evaluate three interventions.

“We investigated the destruction of synchronization in a realistic neural network model whose connecting architecture is formed by a cluster of sub-network, and we found the most significant and interesting aspect to be the verification that the efficiency of synchronization suppression by delayed feedback control is higher and more efficient than for the two other methods: external time-periodic driving and activation of selected neurons. And importantly, the delayed feedback control is an intervention that does not damage the neurons,” said Antonio M. Batista, Ph.D., the team leader of the study from the Department of Mathematics and Statistics at State University of Ponta Grossa, Brazil.

Cluster analysis refers to an algorithm-based method commonly used to identify, classify and compare objects being studied into structures — clusters — that share a similar measure. It is broadly used in many disciplines to analyze a range of characteristics, from pattern recognition to economic data to textual analysis and biological parameters, in this case analyzing the brain’s electrical output.

It has long been documented that the mammalian brain has a cerebral cortex that features complex networks, and is involved in cognitive functions and complex perceptual tasks. There is also substantial literature on cortical networks in the cat cerebral cortex. Clinical evidence points to problems with synchronization of a small group of neurons as playing a key role in some pathological conditions such as Parkinson’s disease, tremor, and epilepsy.

“For this reason, it is important to study ways to control or suppress neuronal phase synchronized bursting rhythms to restore normal spiking-bursting activity in a neuronal network,” Batista said. Their hope is that a novel analytic approach using cluster analysis will have high practical value in identifying productive potential paths for future treatments. “Studies about suppression of synchronization are important due to their link with mental illness,” Batista explained.

ABOUT THE JOURNALChaos is devoted to increasing the understanding of nonlinear phenomena in all disciplines and describing their manifestations in a manner comprehensible to researchers from a broad spectrum of disciplines.http://www.chaos.aip.org