Newswise — The news was not good. An underwater drone armed with the best technology on the planet had descended repeatedly to the bottom of the Indian Ocean, trying to find Malaysia Airlines Flight 370. Time after time, it turned up nothing.

If Nina Mahmoudian has her way, the next generation of autonomous underwater vehicles (AUVs) will have a much better chance of getting it right.

AUVs like the one that hunted for Flight 370 are laden with advanced technology, but they have their shortcomings. During a search, they travel in a predetermined pattern, retrieving reams of information and returning it to the surface, where it can be analyzed, says Mahmoudian, a researcher at Michigan Technological University. Thus, they can spend a lot of time gathering data on things that are not, for example, a missing airplane.

“You need an autonomous vehicle that can go deep and explore an area with a sense of what it is looking for,” she said. “We want to make a smarter vehicle, one that can search on its own and make decisions on its own.”

Mahmoudian is building four of those smarter AUVs, each a little bigger than a loaf of French bread. When they are complete, she will give them something new: better, more powerful brains. That involves revamping their software so they “know” what they are looking for. “AUVs like these could be so much more useful for finding small, hazardous objects like mines, or for detecting problems with cables and pipelines,” she said.

Mahmoudian’s AUVs, named ROUGHIEs (for Research Oriented Underwater Gliders for Hands-on Investigative Engineering) will be underwater gliders. Powered only by batteries, they will “fly” slowly through the water simply by adjusting their buoyancy and weight. This will make them safer and more reliable in shallow waters, where a propeller could become tangled in vegetation or injure a person.

That’s important, because the ROUGHIEs will not be exploring the middle of the ocean; they are designed for use near the water’s edge, which offers a special challenge.

“They come up on the coast, where there’s lots of noise, and we want ours to be able to talk with each other, and perhaps to a mother ship, in any environment,” she said. “That means they’ll have to operate in an area with lots of boats, swimmers and the like.”

Her ROUGHIEs offer additional advantages. They will be modular, allowing users to swap out different components depending on what tasks the drones undertake. And they will cost a fraction of the price of a commercial model to build. That makes them ideal for the trial-and-error process inherent in scientific research.

Underwater gliders and other types of AUVs already play an important role in addressing some of today’s most pressing environmental, safety and biological challenges. Their uses range from detecting dangerous contaminants, like oil spills, to retrieving evidence of climate change. By arming them with smarter software, they would become even better at doing their jobs, including searching an ocean’s depths. “We need solutions for these cases,” Mahmoudian said. “The disappearance of the Malaysian aircraft is a clear example of why we must do this.” 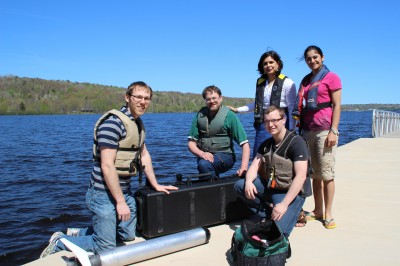 Caption: Nina Mahmoudian, standing second from right, and her team of student researchers on the Michigan Technological University waterfront prepare to launch their underwater drone, ROUGHIE, in Portage Lake. 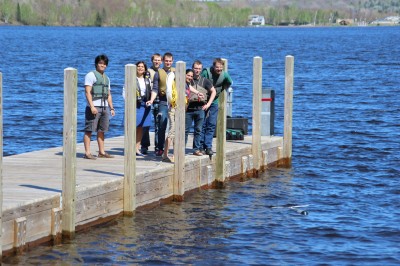 Caption: The autonomous underwater glider ROUGHIE, on a test run near Michigan Tech, is being programmed to be more aware of its surroundings and conduct missions more accurately and efficiently.