Tracking Traffic in the Divided World of a Nerve Cell 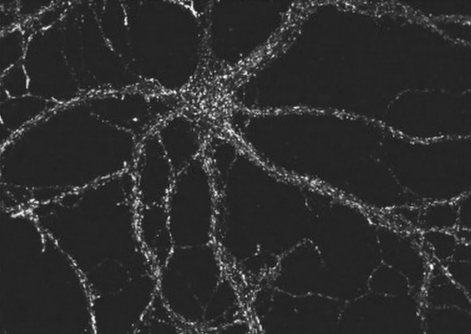 Marvin Bentley is using a combination of research methods to produce live images of selective vesicle transport in nerve cells.

Newswise — Troy, N.Y. – The split personality of a nerve cell illustrates a puzzle. Nerve cells are divided in two domains – the axon sends signals and the dendrites receive them. Axonal and dendritic proteins embedded in the membrane at either end – called transmembrane proteins – are built in the same cellular factory and travel on the same cellular highway. But for the cell to function property, they must be delivered to the correct domain. So how does the cell regulate that voyage?

Nobody really knows, and that’s a problem in addressing diseases that affect the brain, says Marvin Bentley, an assistant professor of biological sciences at Rensselaer Polytechnic Institute and member of the Center for Biotechnology and Interdisciplinary Studies. Trafficking errors show up in most neurodegenerative diseases – including Parkinson’s, Alzheimer’s, and Huntington’s – and yet so little is known about the how cells build, move, and deliver transmembrane proteins that researchers don’t know whether trafficking errors cause or are caused by these diseases.

“This is a fundamental aspect of how the brain works and no one really understands it,” said Bentley, an expert in live imaging of transmembrane protein trafficking who joined Rensselaer in 2017. “My goal is to answer basic scientific questions about this process.”

In a lab that combines diverse skills and disciplines – growing neurons, cultivating tissues, employing biochemistry, molecular biology and live imaging – Bentley has developed a series of research techniques that make it possible to view and track packages of transmembrane proteins as motor proteins carry them to their destination.

“Dr. Bentley’s work is making it possible to track proteins moving through a living neuron in real time, a crucial component in the study of this basic neurological function,” said Curt Breneman, dean of the Rensselaer School of Science. “The information, and the insights derived from the live images he is producing, will advance the field of neuroscience and aid us in tackling crippling disorders. We are very pleased to welcome him as a colleague.”

With their stark division, nerve cells face a specific challenge in this process, which is known as selective vesicle transport. But all cells must accurately route various transmembrane proteins, which – when delivered – span the membrane of living cells and organelles, connecting the interior with exterior, and moving resources and waste from one side to the other. Throughout the life of the cell, transmembrane proteins are replaced as they wear out, creating a constant traffic of proteins being moved from the cellular factories where they are formed to their destination.

Transmembrane proteins are first assembled in the membrane of an organelle called the endoplasmic reticulum. When the proteins are assembled, a patch of membrane containing at least one transmembrane protein buds from the wall of the organelle and forms a spherical package called a vesicle. The vesicle binds to a “tail” at one end of a motor protein. The other end of the motor protein, the “motor domain,” has two “feet” that use chemical energy to walk along molecular highways crisscrossing the cell, ferrying the transmembrane protein to its destination.

Regulation of this journey takes many forms, and in one aspect of his current research, Bentley is examining the relationship between the vesicles and the motor proteins that carry them. This relationship is riddled with unknowns: Nerve cells create an unknown number of axon- or dendrite-specific transmembrane proteins, which can be packaged in an unknown number of vesicles, and are ferried by up to 20 different motor proteins in a class called kinesins.

To better examine these relationships, Bentley has pioneered a series of techniques – including several variations of modified and fluorescently tagged motor proteins – that allow him to visualize motor proteins while they’re moving vesicles in cells. His techniques make is possible for him to see which vesicles specific motor proteins are moving and where they travel, and to manipulate motor proteins and observe how that affects movement.

“Our goal is to figure out the very basics of how the cell works, how neurons work, and hopefully in the future it will be possible to correlate that back to these diseases and devise treatments,” said Bentley. His research is supported by National Institutes of Health R01 grant MH066179 “Neuronal Polarity and Membrane Trafficking.”

Bentley’s research fulfills The New Polytechnic, an emerging paradigm for higher education which recognizes that global challenges and opportunities are so great they cannot be adequately addressed by even the most talented person working alone. Rensselaer serves as a crossroads for collaboration — working with partners across disciplines, sectors, and geographic regions — to address complex global challenges, using the most advanced tools and technologies, many of which are developed at Rensselaer. Research at Rensselaer addresses some of the world’s most pressing technological challenges — from energy security and sustainable development to biotechnology and human health. The New Polytechnic is transformative in the global impact of research, in its innovative pedagogy, and in the lives of students at Rensselaer.