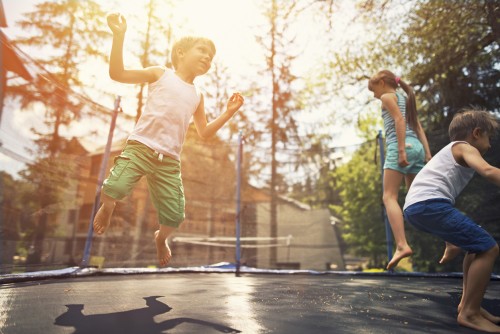 Newswise — It’s summertime. What could be more fun than a group of children bouncing on a backyard trampoline? But, a look at statistics may change a parent's mind.

"Trampolines are a prime culprit in thousands of emergency department visits each year," says Dr. Monica Kogan, Midwest Orthopaedics at Rush pediatric orthopedic surgeon. "They should not be regarded as a toy".

Most trampoline-related fractures and dislocations involve kids under sixteen. According to the American Academy of Pediatrics (AAP), an overwhelming 95% of trampoline injuries occurred at home. Fractures occurred to the forearms, wrists and elbows, in addition to legs and ankles. The most common trampoline injuries are sprains, bruises and injuries to soft-tissue, but head and neck injuries account for at least 10% of ER visits.

Dr. Kogan says that even with netting, trampolines are unsafe and she doesn’t allow her own children to play on them. Dr. Kogan agrees with the AAP that the use of this kind of equipment be restricted to supervised training for gymnastics or diving in a specifically designed setting.

In addition to patients being injured on home trampolines, Dr. Kogan has also treated patients with serious injuries from indoor trampoline parks. The injuries don’t just occur from the child falling, but many of the injuries have occurred when a parent was with the child in the jumpy house/trampoline to supervise, and then ends up falling on the child causing an injury.