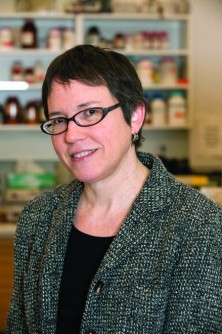 Research by Myra Lipes, M.D., of Joslin Diabetes Center may point toward new ways to diagnose and treat heart disease in people with type 1 diabetes.

Newswise — BOSTON – March 23, 2011 – People with type 1 diabetes, whose insulin-producing cells have been destroyed by the body’s own immune system, are particularly vulnerable to a form of inflammatory heart disease (myocarditis) caused by a different autoimmune reaction. Scientists at Joslin Diabetes Center have revealed the exact target of this other onslaught, taking a large step toward potential diagnostic and therapeutic tools for the heart condition.

Researchers in the lab of Myra Lipes, M.D., have shown in both mice and people that myocarditis can be triggered by a protein called alpha-myosin heavy chain, which is found only in heart muscle and in especially low quantities in human heart tissue.

In their latest work, reported online in the Journal of Clinical Investigation, the scientists analyzed blood from such mice and identified two types of autoimmune response directed specifically against the protein, with the first response directed by a specialized kind of immune system cells called T cells and the second by antibodies.

In both mice and people, T cells are “trained” by specialized cells in the thymus, a small organ in front of the heart, to recognize the body’s own cells and refrain from attacking them. The researchers found, however, that in mice these specialized training cells couldn’t train on the alpha-myosin heavy chain protein because none of that protein was being produced in those cells.

Next, the scientists showed that the disease didn’t develop in similar mice that were genetically engineered to produce the protein in the specialized training cells. “You can totally protect those mice from mortality, which is really extraordinary,” says Dr. Lipes, an Investigator in Joslin’s Section on Islet Cell & Regenerative Biology and an Assistant Professor at Harvard Medical School.

Furthermore, the studies also indicated that alpha-myosin heavy chain was not present in human thymus and that the T cells that sought out the protein could be found in the blood of healthy people. In patients with myocarditis, levels of these cells soared.

The investigation, Dr. Lipes says, suggests that people who are otherwise vulnerable to autoimmune conditions, such as those with type 1 diabetes, may be particularly vulnerable to this risk to their hearts.

Lead funders were the National Institutes of Health and the Juvenile Diabetes Research Foundation.

Joslin Diabetes Center is the world's preeminent diabetes research and clinical care organization. Joslin is dedicated to ensuring that people with diabetes live long, healthy lives and offers real hope and progress toward diabetes prevention and a cure. Founded in 1898 by Elliott P. Joslin, M.D., Joslin is an independent, nonprofit institution affiliated with Harvard Medical School. For more information about Joslin, visit www.joslin.org.