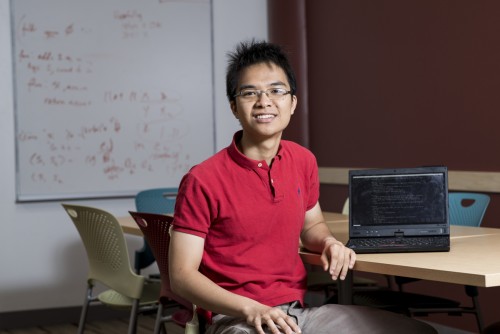 Newswise — MEDFORD/SOMERVILLE, Mass. (October 20, 2015) -- Tufts University junior Khuyen G. Bui has won the 2015 Global Peter Drucker Challenge, selected from among 148 students from dozens of countries in an essay contest focused on managing oneself in the digital age.

As grand prize winner, Bui will be recognized in early November at the annual Peter Drucker Global Forum in Vienna, Austria, where he will meet with thought leaders and members of prominent business media. He will receive a prize of 1,000 euros, approximately $1,125.

The challenge is organized by the Peter Drucker Society Europe and aims to raise awareness among students and young professionals of Drucker’s writings and work. Drucker was a management consultant, educator and prolific author who is credited with shaping modern management theory.

“In this age of information abundance, we have to aggressively filter our media consumption or we will end up with the mental equivalent of diabetes with our fast information diet,” Bui wrote in his winning essay, “Know Yourself and Focus on Contribution – A Reflection on Drucker’s ‘Managing Oneself.’”

“This culture of instant access to information and the easy answer mindset can make us impatient,” he wrote. “As a result, we miss out (on) the chance to develop our tolerance to uncertainty and our capacity to pursue hard work. Perhaps most importantly, we don’t take the time to unplug to reflect on our own strengths, values and purpose, all of which are the crucial ingredients to our characters and fulfillment. In being constantly connected, we lose touch with ourselves.”

Bui, 22, of Hanoi, Vietnam, said the intellectual challenge of writing the essay was its own reward. “Having said that, I am very excited about winning,” he added. “This will be my first time in Europe. Meeting thought leaders, researchers, policymakers and change agents, serendipity is bound to happen.”

Bui was first exposed to Drucker’s work in a class entitled “Organizations, Leadership, and the Business Model of Player-Coach” at Tufts’ Experimental College, which focuses on educational innovation, expansion of the undergraduate curriculum, and faculty/student collaboration within arts, sciences, and engineering. “I was attracted to the clarity of his thinking and writing. His advice is so true, so simple, and so wise,” said Bui, a computer science major.

Over time, Bui read many of Drucker’s works. His interest in the competition was prompted by an event organized this spring by the Tufts Engineering Mentors program, where he met Joan Snyder Kuhl, co-author of “Peter Drucker’s Five Most Important Questions.” Kuhl, a member of the challenge’s judging panel, recognized Bui’s passion for Drucker’s work and encouraged him to enter.

“Khuyen was a clear standout winner as he did a remarkable job bridging Drucker's wisdom from nine decades ago with the FOMO (fear of missing out) culture of today's millennials,” she said. “Khuyen is a gifted writer and thoughtful listener. He is on a path to be a positive and powerful voice for his generation.”

In addition to championing personal development in his essay, Bui promotes effective management and leadership development by volunteering with Compass Fellowship, which provides peer mentorship for Tufts freshmen interested in social entrepreneurship.

“Drucker’s personal mission was to help people do what they want. I share that vision. My personal vision is to learn and to help other people learn,” said Bui, who has not yet chosen a career path. “I want to work with people who are very smart, caring and compassionate, who are working on issues that they care about and who have potential for a large impact on the world.”

About Tufts UniversityTufts University, located on three Massachusetts campuses in Boston, Medford/Somerville, and Grafton, and in Talloires, France, is recognized among the premier research universities in the United States. Tufts enjoys a global reputation for academic excellence and for the preparation of its students as leaders in a wide range of professions. A growing number of innovative teaching and research initiatives span all Tufts campuses, and collaboration among faculty and students in the undergraduate, graduate and professional programs across the university’s schools is widely encouraged. Learn more at www.tufts.edu.