An international teams of scientists has decoded the genome of a songbird – the Australian zebra finch – to reveal intriguing clues about the genetic basis and evolution of vocal learning. The simple melodies are rooted in tremendous genetic complexity. The new work can help scientists understand how humans learn language and sets the stage for new studies to identify the genetic and molecular origins of speech disorders, such as those related to autism, stroke, stuttering and Parkinson’s disease. 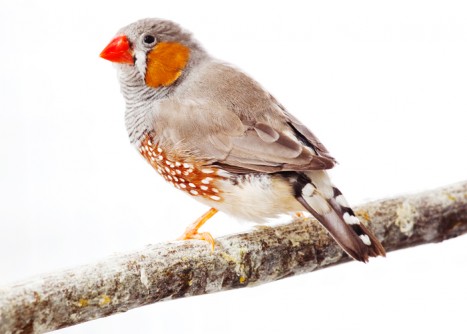 The zebra finch, which gets its name from the black-and-white stripes on the male finch’s throat, is the first songbird to have its genome decoded. The project was led by scientists at Washington University's Genome Center.

Now, an international team* of scientists, led by Washington University School of Medicine in St. Louis, has decoded the genome of a songbird – the Australian zebra finch – to reveal intriguing clues about the genetic basis and evolution of vocal learning.

An analysis of the genome, published April 1 in the journal Nature, suggests a large part of the bird’s DNA is actively engaged by hearing and singing songs. The simple melodies last only a few seconds but are rooted in tremendous genetic complexity, the scientists report.

The new work provides insights to help scientists understand how humans learn language. It also sets the stage for future studies that could help identify the genetic and molecular origins of speech disorders, such as those related to autism, stroke, stuttering and Parkinson’s disease, the researchers say.

“Now we can look deep into the genome, not just at the genes involved in vocal learning, but at the complex ways in which they are regulated,” says senior author Richard K. Wilson, PhD, director of Washington University’s Genome Center. “There are layers and layers of complexity that we’re just beginning to see. This information provides clues to how vocal learning occurs at the most basic molecular level in birds and in people.”

Among songbirds, singing is almost exclusively a male activity: males serenade females with love songs to attract a mate. As babies, they learn to sing by listening to their fathers. At first, a young bird “babbles,” but with practice learns to closely imitate his father’s song. Once the bird has mastered the family song, he will sing it for the rest of his life and pass it on to the next generation.

Aside from humans and songbirds, other animals known to communicate by vocal learning include bats, whales, elephants, hummingbirds and parrots. Because zebra finches learn to sing in a predictable way and many of their genes are conserved in humans, they are an important model for understanding vocal learning in humans.

“The zebra finch genome will be a valuable tool for neuroscientists,” says lead author Wes Warren, PhD, research professor of genetics at Washington University’s Genome Center. “They can now carry out studies to identify a core set of genes in the zebra finch brain involved in both hearing and producing song and then look to see if any of these genes are disrupted in people with speech disorders."

In their investigation of the zebra finch genome, the scientists demonstrated that the act of singing or hearing a song activates large, complex gene networks in the bird’s brain. Past research has shown that hundreds of genes light up in the zebra finch brain as the bird learns a new song. Now, as the investigators looked across the entire genome, they could see hundreds more genes – some 800 in all – significantly engaged by the act of singing.

To the researchers’ surprise, many genes activated by bird song do not act like genes in the traditional sense and code for proteins. Instead, DNA from these genes is transcribed into short stretches of non-coding RNA that control the expression of other genes in the zebra finch brain involved in vocal communication. Among the genes suppressed in the moments after a zebra finch hears a new song, two-thirds are non-coding RNAs, the researchers noted.

Non-coding RNAs are already known to play key roles in developmental processes in humans and in animals. They also have been thought to play a role in the evolution of higher organisms.

“Because vocal learning is found in some of the most complex organisms, non-coding RNAs may be a driving force behind this phenomenon,” says Warren, who also helped organize the genome sequencing effort.

The zebra finch is only the second bird to have its genome decoded. The first was the chicken, which also was sequenced at Washington University’s Genome Center. The two birds split from a common ancestor about 100 million years ago, and their genomes share many characteristics. Both are tight, compact and roughly one-third the size of the human genome: 1 billion units of DNA in the birds versus 2.8 billion in humans.

Interestingly, both birds lack the nervous system gene neuronal protein synapsin 1, a member of a family of synapsins that have been linked to schizophrenia and seizures. This gene has been found in humans and all other animals whose genomes have been sequenced to date – mammals, amphibians and reptiles, including the crocodile, a “sister” to birds in the evolutionary tree. Comparative studies with other animals suggest that the gene was lost eons ago in an ancestor to modern birds, perhaps in dinosaurs capable of flight.

Unlike the chicken, which clucks but does not communicate by vocal learning, the zebra finch retains a great amount of flexibility in the brain to learn bird song.

A comparison of the zebra finch and chicken genomes also reveals some profound differences and suggests several paths through which evolutionary forces may have combined to produce birds capable of vocal learning.

“We don’t have the complete picture yet,” Warren says. “Scientists will need to determine when these characteristics arose during avian evolution and what their significance is. This work would not be possible without having the complete zebra finch genome in hand.”

Also on the horizon is the sequencing of the parrot genome, which is slated for completion later this year. That project is a collaboration between Washington University’s Genome Center and Duke University.