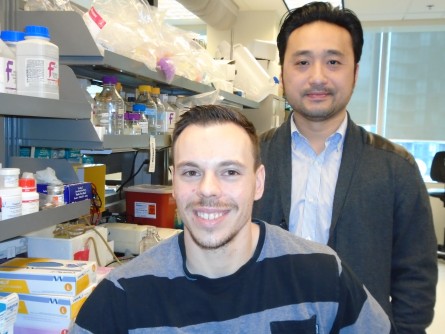 One compound studied is the commonly-used drug metformin for patients with Type 2 diabetes, and the other is resveratrol, a compound found in red wine, grapes, peanuts and blueberries. Although research on resveratrol in cell culture and animal studies has shown promising effects on inhibiting cancer cells, anti-inflammation capabilities and decreases in glucose or blood sugar levels, the compound’s effects on humans is unclear.

“Almost 80% of people living with type 2 diabetes are overweight or have obesity, making it harder for them to control their blood sugar levels. Our work shows that these two antidiabetic agents target the intestine directly, a previously underappreciated organ in diabetes therapy, to lower blood glucose levels, even in obese rats or those with diabetes. This knowledge will help us to develop more effective, targeted drugs, with less side effects. ” says Dr. Frank Duca, a first and co- first author on both papers, and a post-doctoral fellow in the laboratory of Dr. Tony Lam, who holds the John Kitson McIvor (1915 – 1942) Endowed Chair in Diabetes Research and Canada Research Chair in Obesity at UHN and University of Toronto.

“We already knew that the brain and liver regulate blood glucose levels, but the question has been, how do you therapeutically target either of these two organs without incurring side effects?” noted Dr. Lam, and is also a Full Professor of Physiology and Medicine at the University of Toronto. “We may have found a way around this problem by suggesting that molecules in the small intestine can be the initial targets instead. If new medicines can be developed that stimulate these sensing molecules in the gut, we may have effective ways of slowing down the body’s production of sugar, thereby lowering blood sugar levels in diabetes.”

Dr. Lam emphasized that it will take a number of years of experimental work to determine whether the current findings are relevant in humans.

More than two million Canadians have diabetes. Currently, those with diabetes lower their glucose through diet, exercise, anti-diabetic tablets or insulin injections (usually several times a day) and must regularly monitor blood glucose levels. High glucose levels result in damage to eyes, nerves and kidneys and increase the risk of heart attack, stroke, blindness, erectile dysfunction, foot problems and amputations. Many laboratories around the world are in a race to find alternative and effective ways in which to lower glucose levels because of the severe complications which can result from high sugar levels. The current findings from both papers imply that targeting the gut with small compounds could represent the alternative strategies to lower glucose levels and reduce diabetic complications.

Other researchers involved in the studies include Dr. Beatrice Filippi, Melika Zadeh-Tahmasebi, Mira Daljeet, and Dr. Danna Breen from Toronto General Research Institute, Guy Rutter from Imperial College of London, and Joseph Baur from the University of Pennsylvania.

The work was funded by the Canadian Institute of Health Research.