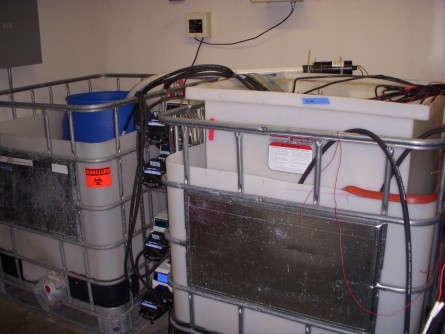 EMBARGOED FOR RELEASE: Wednesday, March 28, 2012, 7:30 p.m. Eastern TimeNote to journalists: Please report that this research was presented at a meeting of the American Chemical Society

A press conference on this topic will be held at 4:30 p.m. Eastern Time, March 28, 2012, in the ACS Press Center, Room 15A, in the San Diego Convention Center. Reporters can attend in person or access live audio and video of the event and ask questions at www.ustream.tv/channel/acslive.

Newswise — SAN DIEGO, March 28 — Scientists today described a new and more efficient version of an innovative device the size of a home washing machine that uses bacteria growing in municipal sewage to make electricity and clean up the sewage at the same time. Their report here at the 243rd National Meeting & Exposition of the American Chemical Society (ACS), the world’s largest scientific society, suggested that commercial versions of the two-in-one device could be a boon for the developing world and water-short parts of the U.S.

“Our prototype incorporates innovations so that it can process five times more sewage six times more efficiently at half the cost of its predecessors,” said Orianna Bretschger, Ph.D., who presented a report on the improved technology at the ACS meeting. “We’ve improved its energy recovery capacity from about 2 percent to as much as 13 percent, which is a great step in the right direction. That actually puts us in a realm where we could produce a meaningful amount of electricity if this technology is implemented commercially. Eventually, we could have wastewater treatment for free. That could mean availability for cleaner water in the developing world, or in southern California and other water-short areas of the United States through the use of more wastewater recycling technologies,” she said.

Current wastewater treatment technology involves a number of steps designed to separate the solid and liquid components of sewage and clean the wastewater before it is released into a waterway. This often involves settling tanks, macerators that break down larger objects, membranes to filter particles, biological digestion steps and chemicals that kill harmful microbes. One estimate puts their energy use at 2 percent of overall consumption in the U.S.

Bretschger’s team at the J. Craig Venter Institute is developing one version of a so-called microbial fuel cell (MFC). Traditional fuel cells, like those used on the Space Shuttles and envisioned for cars in the future “hydrogen economy,” convert fuel directly into electricity without igniting the fuel. They react or combine hydrogen and oxygen, for instance, and produce electricity and drinkable water. MFCs are biological fuel cells. They use organic matter, such as the material in sewage, as fuel, and microbes break down the organic matter. In the process of doing so, the bacteria produce electrons, which have a negative charge and are the basic units of electricity. Electricity consists of a flow of electrons or other charges through a circuit.

The new MFC uses ordinary sewage obtained from a conventional sewage treatment plant. Microbes that exist naturally in the sewage produce electrons as they metabolize, or digest, organic material in the sludge. Bretschger found that microbes exist in the MFC community that might even break down potentially harmful pollutants like benzene and toluene that may be in the sludge.

An MFC consists of a sealed chamber in which the microbes grow in a film on an electrode, which receives their electrons. Meanwhile, positively-charged units termed protons pass through a membrane to a second, unsealed container. In that container, microbes growing on another electrode combine oxygen with those protons and the electrons flowing as electricity from the electrode in the sealed chamber, producing water or other products like hydrogen peroxide.

Bretschger said the MFC also is quite effective in treating sewage to remove organic material, and data suggest a decrease in disease-causing microbes.

“We remove about 97 percent of the organic matter,” she said. “That sounds clean, but it is not quite clean enough to drink. In order to get to potable, you need 99.99 percent removal and more complete disinfection of the water.” Still, she suggested their MFC might one day replace some of the existing steps in municipal wastewater treatment.

The group presented their first MFC last year. Since then, they increased the amount of waste their device could handle each week from 20 gallons to 100 gallons, trucked in from a local treatment plant near San Diego. They also replaced the titanium components with a polyvinyl chloride (PVC) frame and graphite electrodes. Because of that, the new fuel cell costs about $150 per gallon, half as expensive as their previous prototype. The group hopes eventually to bring the cost under $20 per gallon or less to be cost competitive with existing water treatment technologies.

Bretschger reported that the new device is also more than six times as efficient as its predecessor, turning 13 percent of the usable energy in the sludge into electricity. While this only generates a small current, Bretschger explained that a large device running at 20-25 percent efficiency could produce enough power to operate a conventional wastewater treatment plant. A typical sewage treatment plant may consume enough electricity to power 10,000 or more homes, according to some estimates.

AbstractMicrobial fuel cells (MFCs) have long been explored for their use as wastewater treatment and energy recovery devices. Commercial applications of MFC systems have been limited by reactor scalability and low energy recovery efficiencies. Here we present results from an evaluation of a 100 gallon MFC system that can accommodate the removal of biological oxygen demand (BOD) and efficiently recover energy from municipal sludge. The system integrates low cost materials and an improved cathode design. These evaluations led to MFC results that indicate BOD removal and energy recovery from systems that cost approximately 50% less than previously reported 20 gallon MFCs. Acknowledgements: Funding for this project was provided by the California State PIER EISG program.