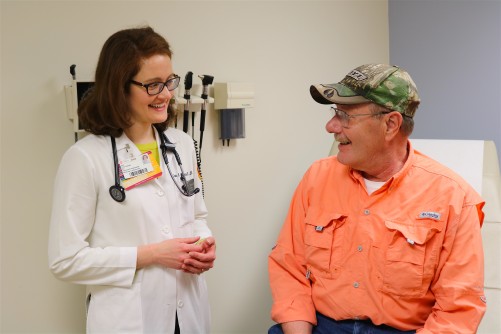 Mr. Spence hopes to sign up 2,190 donors – one for each mile of the trail, which runs from Springer Mountain in Georgia to Mount Katahdin in Maine. He leaves his Carpentersville, Illinois home for the trail on April 25, at the end of National Donate Life Month.

“I am the vessel for my donor’s heart,” Mr. Spence said. “I shall honor it, cherish it and respect it by placing one foot in front of the other.”

Mr. Spence, 62, will be among the older hikers on the trail, and may be the only one who has undergone a heart transplant.

“Bill is a very responsible patient who takes great care of himself,” said his Loyola cardiologist, Erin Coglianese, MD, pictured with Mr. Spence.

“As long as he takes his medications and communicates with us as often as he can, we are here to support him in his endeavor,” Dr. Coglianese said.

Mr. Spence, a retired certified technical trainer, suffered his first of five heart attacks at age 42. He had three pacemakers, a quadruple bypass surgery, several near-death experiences and too many stents to count before he was finally put on the waiting list for a heart transplant.

“I was waiting to either die or get a new heart,” he said.

A heart became available on Jan. 1, 2014, at 3 am. Mamdouh Bakhos, MD, Loyola’s chair of thoracic and cardiovascular surgery, performed the transplant.

Since then, Mr. Spence has worked hard to get in shape. He works out regularly and has lost 65 pounds.

“I have been given the gift of life from someone who I will never meet,” he said. “There are thousands of men, women and children waiting for their gift of life, and some may never get their chance as I did. The more donors who sign up, the greater the chance that people on the waiting list will find compatible matches.”

Mr. Spence will chronicle his journey on his website, http://www.at-tinman.com/.

Loyola has the most experienced heart transplant program in Illinois and has performed more than 750 heart transplants since the program was started in 1984. Loyola’s cardiology and heart surgery program is ranked 29th in the country by U.S. News & World Report and is the only program in Chicago that has been ranked for 12 years in a row.