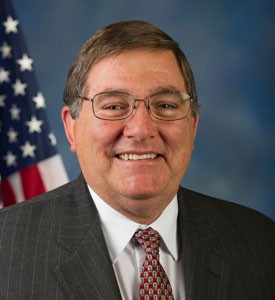 Dr. Burgess, R-Texas, a former resident at UT Southwestern, is an architect and co-sponsor of the legislation. The legislation would establish an Innovation Fund at the National Institutes of Health (NIH) to renew federal support and funding for biomedical research, which has declined more than 22 percent in inflation-adjusted dollars since 2003. The legislation also would set new guidelines for more expeditious FDA approvals of drugs and medical devices. The U.S. House of Representatives approved the 21st Century Cures Act with a vote of 344-77.

“It is crucial that America remains at the front lines of biomedical research and care. These investments lead to exponential advances in medicine,” said Dr. Burgess, an Ob-Gyn. “Today’s event at UT Southwestern offered an exceptional look into the high caliber of people and the effort involved in finding new cures. We cannot allow our lofty, yet achievable goals, to be lost amid the political discourse. What if that cure is within our grasp, sitting in a test tube in one of these labs, just waiting for us to finish our analysis?”

“Biomedical research is of critical and fundamental importance to Texas, the nation, and, most importantly, to all those struggling with disease,” said Dr. Podolsky. “This research includes developing a better understanding of the basic causes and mechanisms that lead to disease, as well as new and more effective therapies made possible by those insights. Groundbreaking research offers the best hope for improving the health of all people.”

Rep. Barton, R-Texas, noted, “There are things in the 21st Century Cures Act that I have worked on for 10 years, things that will help find cures sooner rather than later. I’m tired of telling parents of sick children: ‘I can’t help you.’ This bill is something we can all be proud of. We can now tell parents and others battling disease there is hope. There is a future!

“The work being done at UT Southwestern is going to be a part of that future. I look forward to seeing the discoveries made here.”

Following the roundtable discussion with UT Southwestern’s medical experts, Dr. Burgess and others toured the Hamon Center for Regenerative Science and Medicine, made possible by a $10 million endowment gift from the Hamon Charitable Foundation. The Center’s goal is to understand the basic mechanisms for tissue and organ formation, and then to use that knowledge to regenerate, repair, and replace tissues damaged by aging or injury.

Recently, regenerative medicine researchers at UT Southwestern identified a cell that replenishes adult heart muscle. Researchers have been trying for decades to find the specialized cells that make new muscle cells in the adult heart, because most of these types of cells don’t replenish themselves after a heart attack or other significant heart muscle damage. UT Southwestern researchers were able to devise a new cell-tracing technique, allowing them to detect cells that do replenish themselves after being damaged. The research was funded in part by grants from the NIH.

Other research at UT Southwestern that was funded by the NIH includes the development of a drug that has the potential to prevent malaria in a single dose, work leading to a new class of cholesterol-lowering drugs that were recently approved by the FDA, and a vaccine for Alzheimer’s disease.

“These projects showcase the importance of NIH funding for studies that have great potential to improve health here and abroad,” Dr. Podolsky said. “The projects also demonstrate the value of combining NIH funds with other state, federal, and private monies – multiplying the impact. But research is just the beginning. The amount of time it takes to translate research into therapies that help patients is directly related to congressional support for legislation such as the 21st Century Cures Act.”

During his visit to UT Southwestern, Dr. Burgess also met with residents at Clements University Hospital, UT Southwestern’s new 460-room, $800 million hospital that opened in December 2014. The hospital is specifically designed to not only meet the needs of patients, but to serve as a state-of-the-art teaching facility. The Congressman’s visit included a demonstration of advanced technologies linking patient, operating, and education rooms, which expands opportunities for learning.

“The innovative technologies, educational opportunities, and advanced research and clinical care that we saw today at UT Southwestern illustrate how much we all depend on research and the quality health care it supports,” Dr. Burgess said. “The 21st Century Cures Act is an opportunity to promote discovery and deliver the cures so many of our citizens are hoping for.”