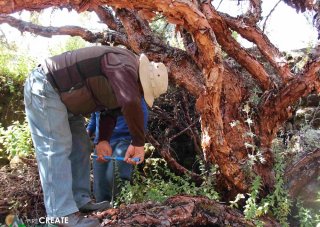 PIRE researchers toured Bolivia for almost a month to collect samples of centenary trees that offer valuable insight into how the region's climate has varied over time.

Newswise — ALBANY, N.Y. (Jan. 12, 2021) – A new tool developed through the University at Albany Visualization and Informatics Lab (AVAIL) is offering an interactive way to view up to two millennium’s worth of paleoclimate data around the globe.

The tool, a result of UAlbany’s ongoing $5 million Partnerships for International Research and Education (PIRE) project funded through the National Science Foundation, includes three visualization maps, all of which are available now to the public:

In 2017, Mathias Vuille, a professor in UAlbany’s Department of Atmospheric and Environmental Sciences (DAES), teamed up with six institutions and 18 investigators from the United States, Brazil and Argentina to gain valuable insight on how and why Earth’s climate has varied naturally over the past thousand years.

The team has collaborated with AVAIL over the last year to translate the research into easy-to-use visualization tools that can help to better inform climate change policies, research and decision-making at a global scale.

“Just having numbers and large datasets is not going to convince most people of the real societal dangers of global climate change,” said Vuille. “We’re grateful to AVAIL for translating our work into a non-scientific language, letting people see it with their own eyes. Even if you’re not a climate scientist, you can still appreciate the hard work and expertise that goes into building something like this.”

“We know that visualizations can be very powerful,” added Catherine T. Lawson, director of AVAIL and associate professor in UAlbany’s Department of Geography and Planning. “Through great collaboration with Mathias and his team we are able to offer them a new and unique way to share their research with the world.”

In addition to the visualization tools, PIRE leaders are hosting a series of international forums to educate scientists, government officials, legislators, ministry staff and other key stakeholders on their climate change projections over the next century.

The project is running through at least August 2023. You can learn more here.