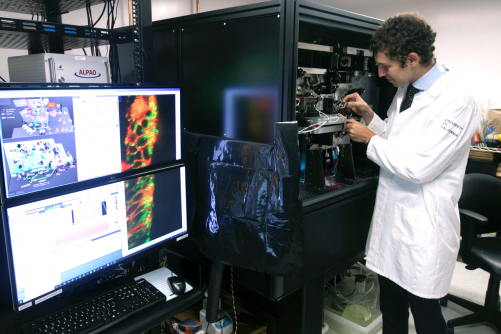 Johannes Schöneberg recently completed construction on one of only a few existing AO-LLSM instruments.

Newswise — Researchers at the University of California San Diego have received a $1.3 million grant from the W. M. Keck Foundation for a project that could help scientists better understand the role misfolded tau proteins play in causing neurodegenerative diseases like dementia, which may lead to more effective drug therapies.

The lifetime risk of developing dementia is one in three, and it is currently estimated that nearly 6 million people suffer from some form of dementia in the United States alone. According to the World Health Organization, dementia is currently the seventh leading cause of death among all diseases and one of the major causes of disability and dependency among older people globally. With no approved disease-modifying drug therapies currently available, there is an urgent, unmet clinical need for the growing population of patients.

The accumulation of misfolded proteins concurrent with disease progression is a hallmark of neurodegenerative disorders known collectively as proteinopathies. Proteins are necessary to almost every cell function; when they are impaired, such as with misfolding, they can accumulate into protein aggregates and lead to disease.

Tau proteins bind and stabilize microtubules, which provide structure and shape to cells. Tauopathies, such as frontotemporal dementia (FTD) and Alzheimer’s disease, are linked to the misfolding of tau proteins.

“We believe tau proteins lie at the nexus of not only Alzheimer’s disease pathology, but other forms of neurodegenerative disease, including frontotemporal dementias. Learning how to disrupt tau from aggregating and how to promote its more effective clearance is an exciting, emerging new direction in research,” said Howard Feldman, dean of Alzheimer’s Disease Research and professor of neurosciences at UC San Diego School of Medicine.

After 40 years of research, how different misfolded proteins contribute to the cause and progression of disease remains unclear. UC San Diego’s team of interdisciplinary researchers believes the solution to the protein-aggregate riddle is hidden in fundamental biology that cannot be accessed using traditional methods and requires not a single kind of expertise, but many kinds.

Each of the principal investigators on the project bring a unique perspective and experience: Fleur Ferguson is a leader in targeted protein degradation; Johannes Schöneberg specializes in 4D subcellular imaging in brain organoids; and Gal Mishne, is an expert in high-dimensional data analysis and machine learning.

The W. M. Keck Foundation grant will allow them to do something novel: reveal the role of tau protein aggregates inside neurons in living tissue. By combining novel small molecule targeting agents with advanced microscopy techniques, organoid cultures (constructed tissue samples that can be used to study aspects of a corresponding organ in a tissue culture dish), and machine learning, the team seeks to build an entirely new model of cellular health based on four-dimensional (4D) organelle dynamics in patient-derived brain organoids.

Ferguson, who holds a joint appointment as assistant professor in the Skaggs Schools of Pharmacy and Pharmaceutical Sciences, developed much of the protein degrader framework that will be used for different tau aggregate species. Ferguson will design, synthesize and apply targeted protein degraders to FTD brain organoids in order to degrade diseased tau proteins.

Schöneberg, who holds a joint appointment as assistant professor in the School of Medicine’s Department of Pharmacology, will use CRISPR technology to tag key organelles in FTD stem cells with fluorescent proteins and image them in 4D at subcellular resolution while the tau aggregates are being degraded.

As an expert in adaptive optics lattice light-sheet microscopy (AO-LLSM), Schöneberg recently completed construction on one of only a few existing AO-LLSM instruments. It is one of the most advanced fluorescence microscopes in the world, and adaptive optics provide the best high-resolution imaging for living cells in tissues.

This 4D imaging, which includes the dimension of time, will create 3 terabytes of data per hour. To analyze this data, Mishne will develop computational methods to analyze the structure and dynamics of mitochondrial networks extracted from the AO-LLSM data. This will serve to quantify how removal of tau aggregates impacts cellular health.

“We expect to reveal, for the first time, how protein aggregates impact cellular health, and in doing so, create an entirely novel experimental blueprint for measuring, quantifying and understanding organelle dynamics,” the team stated. “By overcoming the long-standing disconnect between the pathology of the brain and the progression of the disease, our work will open new pathways to model, study and treat disease across the full spectrum of proteinopathies.”