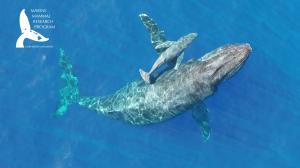 The humpback whale calf is so new that its dorsal fin and tail flukes appear soft and flimsy, and its mother is still excreting blood, while sometimes supporting the calf on her back. The rare video minutes after birth was captured by the University of Hawaiii at Manoa's Marine Mammal Research Program (MMRP) in January 2019.

MMRP Director Lars Bejder was using a drone to shoot video of other humpback whales off the coast of Maui (under a permit from the National Oceanic and Atmospheric Administration) when he got a call from one of the local tour operators. "They had just seen all this whitewater and commotion in the water and weren't quite sure what it was and suddenly there was all this blood in the water, which made us go over there and that's what we discovered--a newborn calf," Bejder recalled.

It was the closest the marine mammal researcher had been to a live birth in 25 years.

"I think everybody can appreciate these kinds of footages, and it brings us closer to these animals and gives us a really majestic view of these creatures," he said. "I think it's pretty spectacular."

The MMRP studies the effects of climate change, human activities and prey availability on whales and dolphins.

Bejder says key collaborators helped him to be in the right place at the right time to record the video, including Ultimate Whale Watch, Oceanwide Science Institute and the Applied Research Laboratory of the University of Hawai?i.