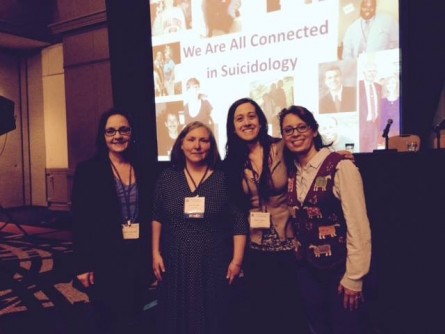 Julie Cerel with attendees of the 48th Annual American Association of Suicidology Conference following her plenary. 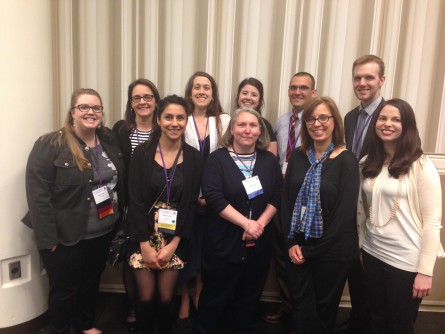 Cerel, van de Venne and a team of researchers and attendees at the AAS conference. 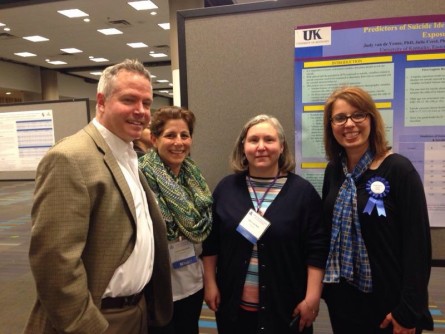 Cerel and Judy van de Venne and other attendees with their award-winning poster.

Newswise — LEXINGTON, Ky. (April 24, 2015) — Since the 1960s, the number six has been commonly used to describe how many people are left behind after each death by suicide. Last week, Julie Cerel, licensed psychologist and associate professor in the University of Kentucky College of Social Work, debunked that statistic, leading to a trending topic on Twitter featuring the "#not6" hashtag. "The number six is not based on evidence but is a best guess that has been widely promulgated," Cerel said, adding further, “it is just not true.” In her plenary presentation at the 48th Annual American Association of Suicidology Conference, of which she is now president-elect, Cerel presented her team's results from Military Suicide Research Consortium-funded data that calculated a different number. They found that 115 people were exposed to each suicide, of whom 25 were deeply impacted and "probably in need of services." "That's a lot more than six, hence the #not6," Cerel said. The audience took to Twitter with photos and facts from her presentation, along with the hashtag. To view the many #not6 tweets, visit the Storify curation, a list of tweets featuring the hashtag: https://storify.com/SPSMChat/we-are-all-connected-in-suicidology-cerel-aas15-no-1. In addition to her successful plenary, Cerel was involved in three presentations and five posters. One of those posters, first-authored by Judy van de Venne, a former UK College of Social Work post-doctoral researcher, won the Professional Poster Award. Laura Frey, a student of Cerel's, who recently defended her dissertation in family science and will join the University of Louisville College of Social Work as a faculty member next fall, also gave an invited paper presentation as part of winning the annual Morton M. Silverman Student Award. 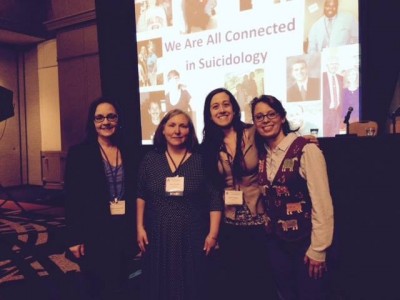 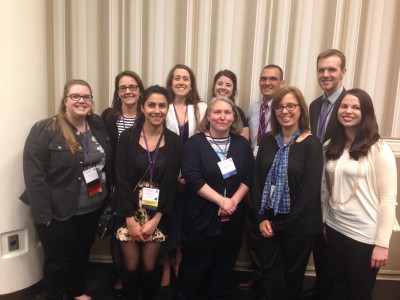 Caption: Cerel, van de Venne and a team of researchers and attendees at the AAS conference. 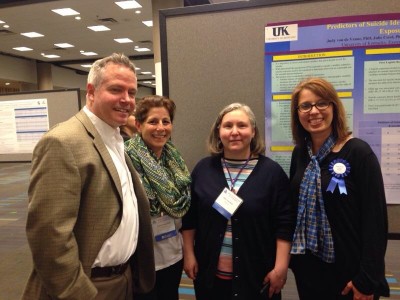 Caption: Cerel and Judy van de Venne and other attendees with their award-winning poster.