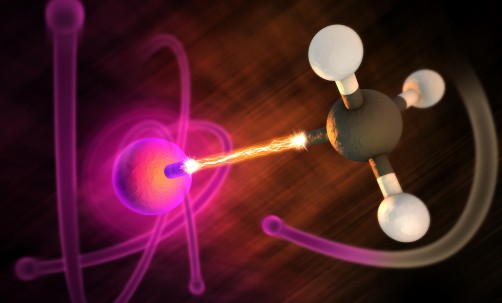 An artistic view of the electron transfer inside an iodomethane molecule. After the interaction with an ultrafast X-ray laser, the electrons from the methyl group, on the right, jump to the iodine atom, on the left.

Artem Rudenko, assistant professor of physics and a member of the university's James R. Macdonald Laboratory; Daniel Rolles, currently a junior research group leader at Deutsches Elektronen-Synchrotron in Hamburg, Germany, who will be joining the university's physics department in January 2015; and an international group of collaborators studied how an electron moves between different atoms in an exploding molecule.

Researchers measured at which distances between the two atoms the electron transfer can occur. Charge transfer processes — particularly electron transfer — are important for photosynthesis in solar cells, and drive many other important reactions in physics, chemistry and biology.

Their observation, "Imaging charge transfer in iodomethane upon x-ray photoabsorption," appears in the journal Science.

"There is a very fundamental question about how far an electron can go to reach the nearby atom in a molecule, and how probable that transition is," Rudenko said. "It has been difficult to capture images of this motion because of the very short times and very small distances that need to be measured."

To find the answer, scientists shot an ultrafast optical laser at iodomethane molecules — molecules made of an iodine atom and a methyl group — to break the bond of these two partners.

The molecules were hit with an intense, ultrashort X-ray pulse to strip the electrons from the inner shells of the iodine atom as well as to study the charge transfer between the fragments. The experiment was performed using the Linac Coherent Light Source, the world's most powerful X-ray laser. The laser is at the SLAC National Accelerator Laboratory in California and delivers femtosecond X-ray pulses. One femtosecond is one-millionth of a billionth of a second.

Researchers were able to see electrons jumping over surprisingly long distances — up to 10 times the length of the original, intact molecule.

"Conceptually the study was pretty simple," Rudenko said. "We break up the molecule with the optical laser, use the X-rays to knock a few electrons from the iodine atom, and control the distance to the neighboring methyl group by tuning the timing between the laser and the X-rays. Then we watch how many electrons move from the methyl side to the iodine side to fill the created holes."

The study recently became possible because of the unique combination of ultrafast optical and X-ray pulses, and researchers' expertise in particle detection.

"In the near future we will be able to perform similar experiments with improved time resolution using ultrafast lasers and tabletop soft X-ray sources at the J.R. Macdonald Lab at Kansas State University," Rudenko said.

Rudenko and Rolles, who served as the study's principal investigators, conducted the research together with colleagues from the former Max Planck Advanced Study Group, Center for Free-Electron Laser Science and the Deutsches Elektronen-Synchrotron in Hamburg; Max Planck Institutes for Nuclear Physics and Medical Research in Heidelberg, Germany; the Physikalisch-Technische Bundesanstalt in Braunschweig, Germany; the SLAC National Accelerator Laboratory; and Sorbonne University and the National Center for Scientific Research in Paris, France.