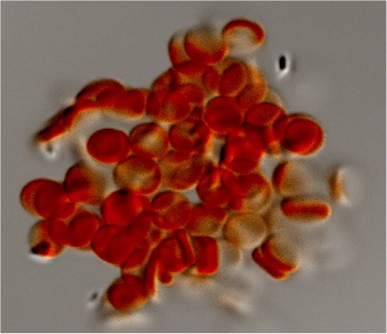 Extremely flexible hydrogel particles that resemble red blood cells in size and shape. To date, attempts to create effective red blood cell mimics have been limited because synthetic particles tended to be quickly filtered out of the circulatory system due to their stiffness. In testing, these flexible particles remained in circulation up to 30 times longer than stiffer ones. Image courtesy Timothy J. Merkel and Joseph M. DeSimone, University of North Carolina at Chapel Hill. 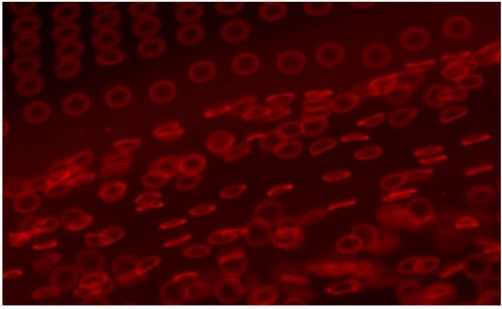 Newswise — A team of scientists has created particles that closely mirror some of the key properties of red blood cells, potentially helping pave the way for the development of synthetic blood.

The new discovery – outlined in a study appearing in the online Early Edition of the Proceedings of the National Academy of Sciences during the week of Jan. 10, 2011 – also could lead to more effective treatments for life threatening medical conditions such as cancer.

[Multimedia note: for images and video, see below]

University of North Carolina at Chapel Hill researchers used technology known as PRINT (Particle Replication in Non-wetting Templates) to produce very soft hydrogel particles that mimic the size, shape and flexibility of red blood cells, allowing the particles to circulate in the body for extended periods of time.

Tests of the particles’ ability to perform functions such as transporting oxygen or carrying therapeutic drugs have not been conducted, and they do not remain in the cardiovascular system as long as real red blood cells.

However, the researchers believe the findings – especially regarding flexibility – are significant because red blood cells naturally deform in order to pass through microscopic pores in organs and narrow blood vessels. Over their 120-day lifespan, real cells gradually become stiffer and eventually are filtered out of circulation when they can no longer deform enough to pass through pores in the spleen. To date, attempts to create effective red blood cell mimics have been limited because the particles tend to be quickly filtered out of circulation due to their inflexibility.

Beyond moving closer to producing fully synthetic blood, the findings could affect approaches to treating cancer. Cancer cells are softer than healthy cells, enabling them to lodge in different places in the body, leading to the disease’s spread. Particles loaded with cancer-fighting medicines that can remain in circulation longer may open the door to more aggressive treatment approaches.

“Creating particles for extended circulation in the blood stream has been a significant challenge in the development of drug delivery systems from the beginning,” said Joseph DeSimone, Ph.D., the study’s co-lead investigator, Chancellor’s Eminent Professor of Chemistry in UNC’s College of Arts and Sciences, a member of UNC’s Lineberger Comprehensive Cancer Center and William R. Kenan Jr. Distinguished Professor of Chemical Engineering at N.C. State University. “Although we will have to consider particle deformability along with other parameters when we study the behavior of particles in the human body, we believe this study represents a real game changer for the future of nanomedicine.”

Chad Mirkin, Ph.D., George B. Rathmann Professor of Chemistry at Northwestern University, said the ability to mimic the natural processes of a body for medicinal purposes has been a long-standing but evasive goal for researchers. “These findings are significant since the ability to reproducibly synthesize micron-scale particles with tunable deformability that can move through the body unrestricted as do red blood cells, opens the door to a new frontier in treating disease,” said Mirkin, who also is a member of President Obama’s Council of Advisors on Science and Technology and director of Northwestern’s International Institute for Nanotechnology.

UNC researchers designed the hydrogel material for the study to make particles of varying stiffness. Then, using PRINT technology — a technique invented in DeSimone’s lab to produce nanoparticles with control over size, shape and chemistry — they created molds, which were filled with the hydrogel solution and processed to produce thousands of red blood cell-like discs, each a mere 6 micrometers in diameter.

The study, “Using Mechano-biological Mimicry of Red Blood Cells to Extend Circulation Times of Hydrogel Microparticles,” was led by Timothy Merkel, a graduate student in DeSimone’s lab, and DeSimone. The research was made possible through a federal American Recovery and Reinvestment Act stimulus grant provided by the National Heart, Lung and Blood Institute, part of the National Institutes of Health (NIH). Support was also provided by the National Science Foundation, the Carolina Center for Cancer Nanotechnology Excellence, the NIH Pioneer Award Program and Liquidia Technologies, a privately held nanotechnology company developing vaccines and therapeutics based on the PRINT particle technology. DeSimone co-founded the company, which holds an exclusive license to the PRINT technology from UNC.

Other UNC student, faculty and staff researchers who contributed to the study are Kevin P. Herlihy and Farrell R. Kersey from the chemistry department; Mary Napier and J. Christopher Luft from the Carolina Center for Cancer Nanotechnology Excellence; Andrew Z. Wang from the Lineberger Center; Adam R. Shields from the physics department; Huali Wu and William C. Zamboni from the Institute for Pharmacogenomics and Individualized Therapy at the Eshelman School of Pharmacy; and James E. Bear and Stephen W. Jones from the cell and developmental biology department in the School of Medicine.

The study is an example of the type of research that supports the Innovate@Carolina Roadmap, UNC’s plan to help Carolina become a world leader in launching university-born ideas for the good of society. To learn more about the roadmap, visit innovate.unc.edu.

Video:http://www.youtube.com/watch?v=ADQXYjmrVQECaption: Synthetic red blood cell mimics measuring 6 micrometers across, passing through a 3 micrometer diameter channel in a microfludic device used to test the particles’ flexibility. The particles shown had already squeezed through about 50 such channels without losing their shape or elasticity. Video courtesy Timothy J. Merkel and Joseph M. DeSimone, University of North Carolina at Chapel Hill. 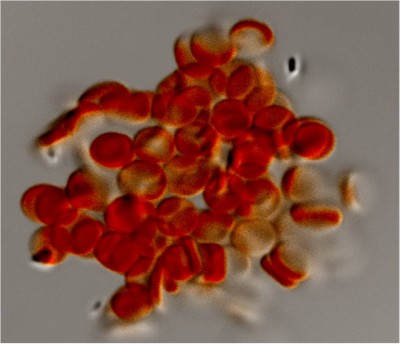 Caption: Extremely flexible hydrogel particles that resemble red blood cells in size and shape. To date, attempts to create effective red blood cell mimics have been limited because synthetic particles tended to be quickly filtered out of the circulatory system due to their stiffness. In testing, these flexible particles remained in circulation up to 30 times longer than stiffer ones. Image courtesy Timothy J. Merkel and Joseph M. DeSimone, University of North Carolina at Chapel Hill. 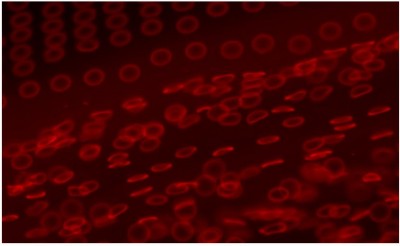