19-Sep-2022 11:05 AM EDT, by University of Oklahoma, Gallogly College of Engineering
favorite_border 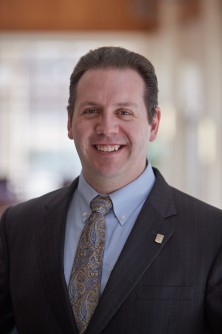 Michael Detamore, Ph.D., a biomedical engineering researcher at the University of Oklahoma, was recently awarded $2.4 million from the National Institute of Neurological Disorders and Stroke at the National Institutes of Health for a project titled, “Single stage surgical intervention for treatment of severe traumatic brain injury.”

Newswise — A battered woman. A wounded warrior. A football player. All from completely different worlds. Yet, all are connected by one thing – traumatic brain injury.

In the United States, traumatic brain injury affects around 1.7 million people, with most of the injuries occurring in adolescents ages 15-19 and adults aged 65 and older. In 2020, over 64,000 TBI-related deaths were reported in the United States.

Across the globe, hundreds of researchers have dedicated their careers to studying and testing methods to improve treatment options for TBI survivors. Michael Detamore, Ph.D., a biomedical engineering researcher at the University of Oklahoma, was recently awarded $640,000 from the National Institute of Neurological Disorders and Stroke at the National Institutes of Health for his project titled, “Single stage surgical intervention for treatment of severe traumatic brain injury.”

Patients who suffer a severe TBI must undergo two surgeries: one to remove a part of the skull to allow the brain to swell and another surgery to replace the missing bone after brain swelling subsides.

Detamore and his team may have found a way to reduce the number of surgeries to just one. That’s a big deal.

When someone experiences a severe brain injury, a portion of the skull must be removed to allow the brain to swell. A second surgery is then required to replace the missing piece of the skull.

“When a doctor does a hemicraniectomy, removing the top part of the skull, there must be a second surgery,” Detamore said. “In a second surgery, they can either put back in a printed or metal plate or the original bone if it was preserved. But there is always a second surgery to fill that gap.”

Traumatic brain injury’s after-effects – memory loss, dizziness, depression – can show up weeks or months until the missing bone is replaced in a second surgery. Detamore believes patients can be treated through a single-stage surgical procedure using hydrogel materials.

“The key to our approach is a new class of hydrogel materials, where natural materials including demineralized bone matrix, devitalized cartilage or devitalized tendon are themselves the crosslinkers of the hydrogel,” Detamore said. “Our material consists of a paste-like precursor solution of tissue particles and hyaluronic acid that behaves as a paste that a surgeon can easily sculpt into the open calvarial defect area. The material remains flexible so the brain can swell, and then be replaced by regenerating bone, eliminating the need for the second surgery.

“Hydrogel starts as paste, like toothpaste or peanut butter, that the surgeon can spread and contour into the defects of the brain. When a light is shone on the paste, its sets. It’s not solid like wood, it’s like Jell-0. It’s flexible, but it’s solid.”

Detamore recognizes that hundreds of researchers are studying TBI through different lenses such as psychological and pharmacological.

OU’s research is unprecedented though, he says. “Our team is the first to use regenerative medicine as a tool to help treat traumatic brain injury.”

Detamore’s interest in the field started about 15 years ago when he served on a master’s thesis committee where a student’s work focused on paste-like biomaterials.

“I remember thinking that the student’s research would be perfect for bone regeneration – and it sounded like I was joking, but I was very serious and followed up on it,” he said. That effort led to an NIH grant with Cory Berkland, Ph.D., of the University of Kansas, as principal investigator.

Flash forward to present day and Detamore is a principal investigator of this current NIH project. Berkland, Dr. Brian Andrews, a surgeon who specializes in head and neck surgery at the University of Iowa Hospitals and Clinics, and neuroscientist and the other principal investigator Randolph Nudo, Ph.D., Kansas University Medical Center, are also involved in the initiative.

Current TBI surgical management hasn’t changed much since the injury was first identified in 1908. “This means that unlike almost every other medical condition, there have been few to no advances to treat TBI, which is a debilitating and prevalent problem in our society. Moreover, there are few non-surgical options such as systemic drug therapy to treat TBI,” Andrews said.

Andrews wants their work to fill the gaps.

Today, the research team has eight key personnel. Detamore explains the process like this: “OU is doing more of the work on the material side and the group at the University of Kansas are doing more of the work with the traumatic brain injury model. Neither university could do this project on its own. It’s the synergistic combination that makes this project possible and that is also what makes that unique niche possible. We are the only ones in the world doing this because of the different types of people coming together.”

In 2016, Detamore was hired to lead the newly formed Stephenson School of Biomedical Engineering in the Gallogly College of Engineering at OU. He and then-student Jakob Townsend, Ph.D., continued to move the TBI research project forward. Townsend has since graduated from OU and continues to contribute to the project emphasizing that TBI affects more than just military personnel and athletes. It affects kids.

“We need something that can be implanted into a child and grow with the child over time,” he said. “Hydrogel materials can accomplish that. When we talk with surgeons, we continue to learn of even more areas where hydrogels can make an impact and help patients. Each member of the team looks forward to seeing how far this project can go.”

So, what’s next? Detamore thinks answers are in a rat model. “Rats are obviously not identical to humans, and a skilled neuroscientist would point out that there are limitations of rats as a model,” he said. “We acknowledge those limitations, however, a responsible first step to begin the investigation starts here.”