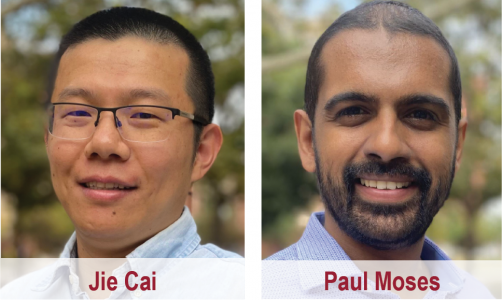 Newswise — There’s no doubt that today’s electric grid is aging and being pushed to do more than intended. Extreme weather, natural disasters and increased demand – all are taking a toll on America’s century-old infrastructure.

Across the globe, hundreds of researchers have dedicated their careers to studying renewable energy to help reduce carbon emissions and energy independence. In September, University of Oklahoma assistant professor Jie Cai, Ph.D., and a team of researchers were awarded funding to study thermal energy storage in commercial and residential buildings to promote renewable energy utilization.

The funding comes from the U.S. Department of Energy through its Establish Program to Stimulate Competitive Research (EPSCoR). Cai’s project was one of 29 new projects nationwide to receive research funding totaling $21 million.

“Our project aims to unlock the flexibility potential of demand-side resources and promote deeper renewable energy utilization by significantly reducing the lifecycle management and grid integration costs,” said Cai who joined the OU School of Aerospace and Mechanical Engineering in 2017.

Cai points out that real-time supply and demand balance is the key to the stable and reliable operation of the electric grid.

“The intermittency and uncertainty of renewable resources, such as solar and wind, pose challenges for maintaining real-time supply and demand balances. These challenges lead to a growing demand for fast-ramping resources such as diesel and natural gas generators to compensate for imbalances, which in turn increases the grid integration cost of renewable energy,” Cai said.

One effective measure to cut the renewable integration cost is to make better use of the existing motorized energy storage systems, which refer to storage technologies that rely on electric motors to drive the energy charge and discharge processes, Cai says.

Prominent examples include pumped storage hydropower and heat pump-driven thermal storage in buildings. “However, the impact of flexibility provision on the lifetime of motorized energy storage is largely unknown and represents a major deterrent to their widespread adoption in the electricity market,” Cai said.

Ultimately, the researchers want to develop a numerical model that can predict the aging of electric motors under different control conditions, as well as leverage the motor aging model for the synthesis of an improved control strategy to minimize the aging effect of grid flexibility provision.

Project findings are anticipated to address equipment reliability and lifetime concerns and promote the participation of motorized energy storage in the electricity market.

To learn more about the Gallogly College of Engineering, visit www.ou.edu/coe.