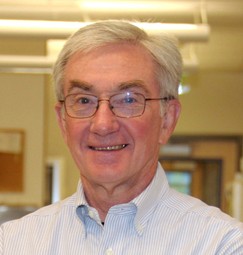 Newswise — Dana Carroll’s road to becoming a world-class researcher renowned for his work on gene targeting started with a speed bump. In 1997, the University of Utah biochemist applied for an NIH grant to study targeted mutagenesis—a method of making changes to DNA sequences to alter genes—and gene replacement. The subject was gaining traction in the science world and Carroll had a groundbreaking idea: to boost the efficiency of gene targeting by breaking DNA at strategic sites. The action would summon the cell’s repair machinery, which is required for the process. The NIH shot Carroll’s application down. But he didn’t give up. After an appeals process in which he eventually won the funding needed to carry out the project, Carroll today claims the title as the first scientist to develop the zinc-fingered nuclease (ZFN), chemical scissors that cut DNA at specific sites, as a tool for genome engineering. His storied career, which included 24 years as chairman of the University of Utah’s Department of Biochemistry until he stepped down in 2009, is credited with advancements in dissecting gene function, engineering disease and drought resistant (or hardy) crop plants, and correcting genetic diseases in people. This month Carroll is adding another accolade to his many accomplishments: he’s the recipient of the Herbert Sober Lectureship, a prestigious honor awarded by the American Society for Biochemistry and Molecular Biology to a scientist who has shown outstanding biochemical and molecular biological research, with particular emphasis on development of methods and techniques to aid in research. “Gene-targeting procedures have been available for fungi and for mouse (embryonic stem) cells for many years, but the success rates of actually altering genes were low, and the approaches were not applicable to other organisms,” said Martin C. Rechsteiner, Ph.D., distinguished professor emeritus of biochemistry at the University of Utah. “Dr. Carroll’s insight was that double-strand breaks in the target DNA will substantially stimulate the gene replacement (or targeted mutagenesis) process. He then sought DNA cleavage compounds that could cut DNA at specific sites.” Those DNA cleavage reagents were ZNFs, which Carroll started studying after persevering through the NIH grant process in 1997. Researchers elsewhere in the country had developed ZFNs and Carroll saw an opportunity to expand their capabilities to make gene targeting —coincidentally the same process the garnered the U.’s Mario Capecchi, Ph.D., the 2007 Nobel Prize in physiology or medicine —more streamlined. His pioneering work meant researchers could engineer changes into certain genes of organisms, altering the course of development.

Carroll’s hunch about ZNFs was dead-on and exponentially improved the success rate of gene targeting. Using the original method of gene targeting, the correct gene was altered about one in 1 million times. But after Carroll’s breakthrough with ZFNs, researchers successfully alter the correct gene as much as one in 10 times, or even more often. The breakthrough allows scientists to produce mutations that help uncover new information about gene function and to dive deeper into human diseases through developing animal models.

"Investigating ZFNs as tools for genome engineering seemed like the path to go down for advancements in gene targeting," Carroll said, adding that he is glad he kept trying when his research ideas were first rejected and is pleased that his resulting accomplishments have made an impact. “It’s very nice to have people think that I did something that was special,” Carroll said.

Several of Carroll’s colleagues who endorsed him for the Herbert Sober Lectureship emphasized how his creativity has played a vital role in important scientific breakthroughs. “(Many) exciting developments can be traced back to Dana Carroll’s initial creative insight, which enabled efficient targeted genome modification by creating targeted chromosomes,” said Dan Voytas, Ph.D. director of the University of Minnesota Center for Genome Engineering in a letter of support for Carroll. “The breadth of impact that genome editing will make in the coming years is breathtaking,” added Jasper Rine, Ph.D., a professor of Genetics, Genomics and Development at the University of California, Berkeley. “…the beauty of Dr. Carroll’s achievement is underscored by the rush of new variations of genome editing, all founded on the principles he first established for zinc finger nucleases.” Hear Carroll speak more about his work in an interview with The Scope Radio: http://healthcare.utah.edu/the-scope/shows.php?shows=0_olx8p4s0