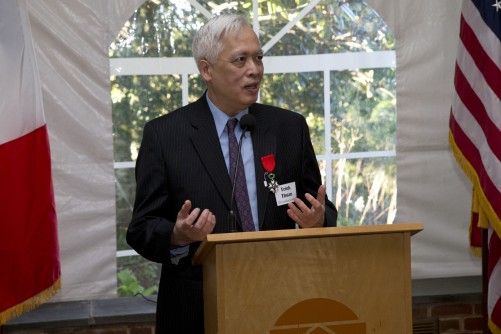 University of Virginia astronomer and author Trinh Thuan, has been named chevalier of the National Order of the French Legion of Honor.

Newswise — Trinh Thuan, a University of Virginia astronomy professor and author, has been named chevalier of the National Order of the French Legion of Honor, by decree of French President François Hollande.

Napoleon Bonaparte established the Legion of Honor, the highest decoration in France, in 1802. Hollande cited Trinh for his “exemplary personal commitment to the promotion of scientific culture and the transatlantic collaboration in the field of astrophysics.” He received a medal Wednesday from French ambassador to the United States François Delattre during a ceremony at Carr’s Hill, the residence of U.Va.’s president.

“The French Legion of Honor is just the latest in a long series of accolades bestowed on Professor Trinh in recognition of his excellent research and scholarship,” U.Va. President Teresa A. Sullivan said. “This award brings honor and distinction to the University, and all of us in the U.Va. community are proud and grateful.”

“Ever since my childhood and adolescence in Vietnam, while I was attending French schools, I have had a profound admiration for and attachment to the French culture and language,” Trinh said. “So when I started writing for the general public, it was natural that I turn to the French language to express my ideas. I am deeply grateful to France for having recognized my work and awarded me this prestigious honor.”

Trinh is a highly regarded author in France, where his popular science and science-related books are best-sellers. Born and raised in Vietnam, where he first was educated in French schools, he writes in the French language. Several of the 11 books he has published have been translated into other languages, including English.

Trinh is the recipient of other honors in France and internationally. In 2007 he received the Grand Prix Moron, France’s equivalent of the Pulitzer Prize, for his book, “The Ways of Light: Physics and Metaphysics of Light and Darkness.” In 2009 he received the Kalinga Prize for the Popularization of Science from the United Nations Educational, Scientific and Cultural Organization, or UNESCO. And in 2012, the Institut de France named Trinh winner of its Cino Del Duca World Prize in recognition of his work to communicate science to the general public.

“Most folks who know Thuan are aware that he is an author who explores the boundaries of science, philosophy and religion,” said Mike Skrutskie, who chairs U.Va.’s Department of Astronomy. “What many fail to appreciate is just how renowned he and his works are in the French-speaking world. In many ways, Thuan is ‘the French Carl Sagan,’ to the extent that, in France, people recognize him and stop him on the street to discuss astro-philosophy. In this regard, the French Legion of Honor is amazingly appropriate and well-deserved.”

Trinh’s astronomical research is centered on understanding the formation of galaxies and the chemical composition of the universe. He earned his bachelor’s of science degree at the California Institute of Technology and his Ph.D. at Princeton University.

Since coming to U.Va. in 1976, Trinh has taught thousands of students two introductory courses in astronomy for non-science majors: “Introduction to the Sky and the Solar System” and “Introduction to Stars, Galaxies and the Universe.”

“I have no doubt that teaching science to non-scientists has honed my skills in writing about scientific issues to the general public,” Trinh said. “In other words, my teaching has fed my writing, and vice versa.”

Trinh is not the first with U.Va. ties to have been decorated with the French Legion of Honor in recent years. In 2007, professor John D. Lyons, then chair of the Department of French Language and Literature, was named a chevalier. In 2009, alumnus, U.Va. benefactor and former Board of Visitors member Mortimer Caplin was similarly honored for his role in World War II’s Normandy invasion.

A few other distinguished Americans who have been similarly honored include President Dwight D. Eisenhower, chef Julia Child, Nobel Prize-winning novelist Toni Morrison, as well as ambassadors, military leaders, professors and others from a range of fields.