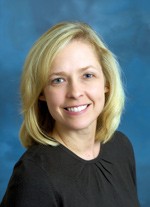 Newswise — President George W. Bush made no secret that he detested broccoli.

With all due respect to our former leader, researchers have found one more great reason to add fruits, vegetables, herbs and tea to your diet.

A study by Susan Steck of the Arnold School of Public Health finds that a high intake of flavonoids, a group of compounds found in plants, may lower the risk for highly aggressive prostate cancer.

“Incorporating more plant-based foods and beverages, such as fruits, vegetables, herbs and tea, into the diet may offer some protection against aggressive prostate cancer,” said Steck, an associate professor at the Arnold School and an affiliated scholar with the Center for Research in Health Disparities.

“Filling your plate with flavonoid-rich foods is one behavior that can be changed to have a beneficial impact on health,” she said.

Steck presented her findings at the International Conference on Frontiers in Cancer Prevention Research. The annual event is sponsored by the American Association for Cancer Research, whose mission is to prevent and cure cancer through research, education, communication and collaboration.

Steck and her colleagues used data from 920 African-American men and 977 white men in the North Carolina–Louisiana Prostate Cancer Project who were newly diagnosed with prostate cancer. Participants completed a self-reported dietary history questionnaire to assess flavonoid intake, which was measured using the U.S. Department of Agriculture’s 2011 Database for the Flavonoid Content of Selected Foods.

Men with the highest total intake of flavonoids had a 25 percent lower risk for aggressive prostate cancer compared with those men with the lowest flavonoid intake.

“We found that higher total flavonoid intake was associated with reduced odds for aggressive prostate cancer in both African-American and European-American men, but no individual subclass of flavonoids appeared to be protective independently, suggesting that it is important to consume a variety of plant-based foods in the diet, rather than to focus on one specific type of flavonoid or flavonoid-rich food,” Steck said.

In addition, the risk for aggressive prostate cancer was even lower in those men younger than 65 and in current smokers with the highest levels of flavonoid intake. Dietary questionnaire results revealed that citrus fruits and juices, such as oranges and grapefruits, tea, grapes, strawberries, onions and cooked greens were the top contributors to total flavonoid intake among the participants. “The results support public health recommendations and guidelines from organizations such as the American Institute for Cancer Research to consume a more plant-based diet,” Steck said. “In particular, consuming more flavonoid-rich foods may be beneficial for those people who are at increased risk for cancer, such as smokers.”###