South Dakota State University researcher Julie DeJong discusses the value of museum collections in helping her do a study that reaches back over time to use duck eggs as the markers to track climate patterns and possible climate change. 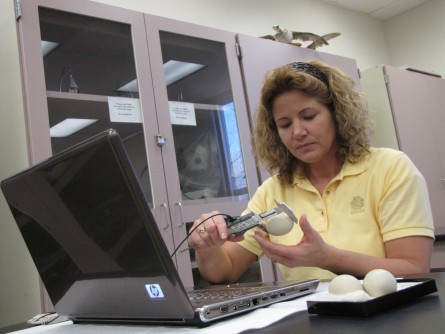 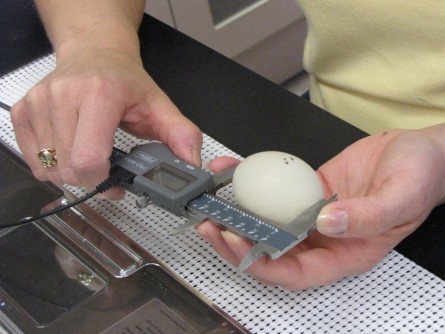 Measurements of duck eggs from museum collections going back about 150 years can provide evidence of how ducks have responded to climate patterns and climate change.

Newswise — BROOKINGS, S.D. — Julie DeJong can’t set foot on the ground of an Oregon marsh to gather duck eggs on a spring day in 1875.

But Charles Bendire did. And thanks to a research project that is the next best thing to time travel, DeJong is measuring the duck eggs in several museum collections — from the Smithsonian Institution, in this case, where Bendire was the first curator of the discipline known as oology, or the study of birds’ eggs. When her project is done, DeJong will have assembled and analyzed a metrics database on perhaps 60,000 duck eggs representing at least 40 species and subspecies of ducks found in North America.

What she learns could ultimately add new knowledge about how waterfowl respond to climate cycles and long-term climate change.

DeJong is a Ph.D. student in South Dakota State University’s Department of Wildlife and Fisheries Sciences. Part of her work involves logging current measurements of duck eggs that cooperating researchers are gathering for her in the field, as well as recent measurements from studies in the past few years. But DeJong is also visiting museums across the U.S. and Canada to measure duck eggs collected by naturalists up to 150 years ago to build a database of how the dimensions of eggs have changed, if they have changed, over past decades.

“What we’re trying to do with this project is to see, through different drought cycles and heavily wet cycles, if the size of the eggs from these ducks will change,” DeJong said. “The reason that they might change in size is due to changes in the nutrient levels from foods such as invertebrates that are available during breeding. If, say, the Prairie Pothole Region is completely dried up due to drought for several years in a row, those ducks are going to experience a drop in the nutrients they’re used to getting. They may not breed, but if they do attempt to breed, they’re not going to have as many nutrients available to them to produce those eggs. Our hypothesis is that those eggs will be smaller then.”

The project is influenced by studies that SDSU Distinguished Professor Carter Johnson and his colleagues have done by examining how the future climate would affect water levels and waterfowl production in the Prairie Pothole Region, a region in South Dakota and neighboring states and provinces that produces more than half of North America’s migratory ducks. Johnson’s data from the start of the 20th century until now suggest that some western parts of the Prairie Pothole Region are becoming hotter and drier. If the trend continues, ducks may produce fewer young if drought forces them to nest in unfavorable locations elsewhere.

DeJong’s adviser, Professor Emeritus Ken Higgins of SDSU’s Department of Wildlife and Fisheries Sciences, came up with the idea of investigating whether ducks have already been adjusting to such changes. And he came up with the ideal mechanism for the study — assembling data from decades of egg collections in natural history museums.

“It is like time travel, because there’s no way I could go back 150 years and collect that kind of data,” DeJong said. “There is so much information sitting there in these museums that people forget about. When people these days plan a research project, they’re starting today and going into the future. They don’t usually have the opportunity to look backward.”

Looking backward is already revealing some surprises. While it’s too soon to draw firm conclusions, DeJong noted that her preliminary data does suggest that a few species, such as the Lesser Scaup, appear to be producing smaller eggs over the past 40 to 50 years. However, that data by itself says nothing about why. Searching for the main causes of the size changes in duck eggs will be the next stage of research for the project.

DeJong will plot the coordinates of the egg collections on a map of North America using geographic information system technology, and she’ll overlay that map with new layers of information about ecological region and climate patterns through the years. Ultimately she’ll be able to determine whether changes in duck egg size appear for specific species or ecological regions or time periods.

Since duck egg collectors weren’t spread out systematically over time or geography, there are gaps that pose challenges for statistical analysis. One way DeJong tries to deal with that is by simply visiting more museums and mapping the data from more eggs. She’s indebted to 19th century naturalists for much of her data.

“These early bird egg collectors, largely known as ‘oologists,’ were kind of a breed all their own. They went out and trekked into swamps, prairies and woodlands all over the United States and Canada and the far reaches of Alaska and collected these eggs, some of them just for their own enjoyment, some for commercial sale, and some of them to document what was there,” DeJong said.

Counting current and recent data provided to her by other researchers who are interested in the project, DeJong expects to include data from about 60,000 eggs by the time the study wraps up in 2012. For example, a cooperating researcher has shared data on 30,000 eggs from Alaska alone, but other cooperators have shared data from as far afield as Nova Scotia. The U.S. Fish and Wildlife Service is funding most of the cost of the research.

Regardless of what she finds, DeJong said the study also will provide baseline data for scientists — a source for comparison of future research.

“Early oologists were the first birders in North America, yet most of them were not scientists per se, but an assortment of doctors, farmers, hunters, and nature enthusiasts. Our early information on the breeding season, habitat use, and physical descriptions of the breeding adults and their nests and eggs of hundreds of North American birds came from oologists,” DeJong said. “By collecting the eggs and other collateral data, they were not only collecting beautiful objects to put in a cabinet drawer, they were also documenting the natural history and breeding history of the birds, which can be used by scientists today and in the future. None of this type of research would have been possible without the actual presence of the eggs because the metrics needed for this project could not have been obtained solely from photo image alone. I hope my research stimulates thought about the possible uses of these egg collections and of other kinds of specimen collections in museums around the world. By making use of these collections, we pay tribute to these naturalists for their hard work, perseverance and love of nature.”