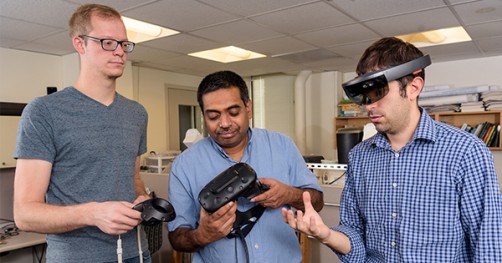 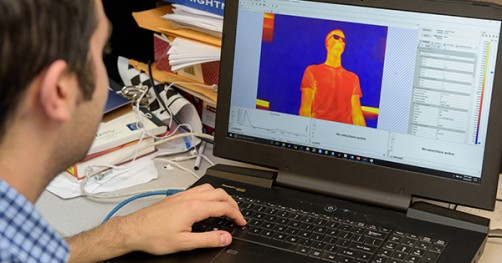 Post-doctoral fellow Philip Saponaro demonstrates the imaging technology being developed in the VIMS lab, which picks up signals from a person in the camera’s view.

Newswise — Soldiers in combat have to constantly scan their surroundings for improvised explosive devices (IEDs), a signature weapon of modern warfare. These homemade bombs are often hidden—nestled in bushes, buried underground, or sometimes stuffed inside other objects.

Now, a research group at the University of Delaware is developing technology to detect explosive devices from a distance. Chandra Kambhamettu, professor of computer and information sciencesand director of the Video/Image Modeling and Synthesis (VIMS) Lab, has received a five-year, $1M grant from the U.S. Army Research Office for this project. This work is in collaboration with a team of research scientists from Army Research Lab, Kelly Sherbondy, Brian Phelan, Getachew Kirose, Gregory Smith, John Clark, and Arthur Harrison.

Working on a deadly problem

Landmines, improvised explosive devices (IEDs), and other homemade bombs struck 6,461 people worldwide in 2015, killing at least 1,672, according to a report by the International Campaign to Ban Land Mines and Cluster Munition Coalition.

Survivors are often left with devastating injuries. In a study published in BMJ Open, 70 percent of people hit by IEDS in Afghanistan required multiple amputations.

To keep soldiers away from these deadly weapons, researchers are developing technology that can spot explosive hazards precisely and from a safe distance. Kambhamettu and Philip Saponaro, a post-doctoral fellow, are creating an augmented reality system that will use traditional cameras, thermal infrared sensing and ground penetrating radar to find and classify potentially dangerous objects from up to 30 meters away.

The technologies complement each other. Regular cameras collect visible light, while infrared cameras detect heat and are unaffected by light, making them ideal for nighttime use, foggy conditions, and dust storms. The system’s radar uses radio waves to probe the surrounding environment.

“With infrared, you can see and understand more than you would with just visible light,” Kambhamettu said. “Then, with radar, you can see objects that differ from their surroundings, buried up to 3-5 inches.”

Even if one sensor modality fails to detect an IED, another may reveal it.

“Some objects that are completely invisible to traditional cameras are easily spotted by the thermal cameras,” Saponaro said.

The multi-camera systems could be deployed on autonomous vehicles, drones, or robots sent to scout the surroundings before troops move in.

The technology being developed in Kambhamettu’s lab is tested on vehicles at a military training facility. Kambhamettu and his team will gather data from the cameras, apply deep learning to the data, and develop algorithms to make target detection more effective. They will also visualize scenarios in a virtual reality environment.

The goal: “Take the data, feed it into a computer algorithm and be able to tell whether a target is present or not,” said Saponaro.

This research may also have applications that extend far beyond the military.

“What we’re doing here is useful for day-to-day life, too,” said Kambhamettu.

For example, a device that spots hidden objects could help elderly or blind people walk more safely by alerting them to hurdles in their path.

Kathy McCoy, the Chair of the Department of Computer and Information Sciences, said, “The cutting-edge work being done in this lab has tremendous potential for significant positive impact. This particular project that involves teaming up with the Army Research Lab and using a creative battery of vision techniques to find IEDs will enable detection that goes far beyond what is currently possible. The consequences to the safety of our soldiers is enormous.” 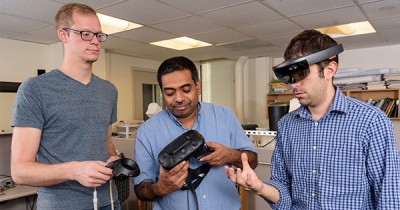 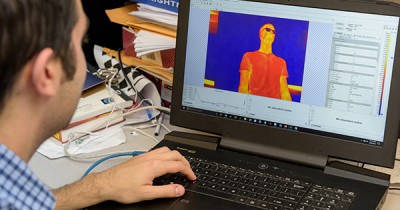 Caption: Post-doctoral fellow Philip Saponaro demonstrates the imaging technology being developed in the VIMS lab, which picks up signals from a person in the camera’s view.