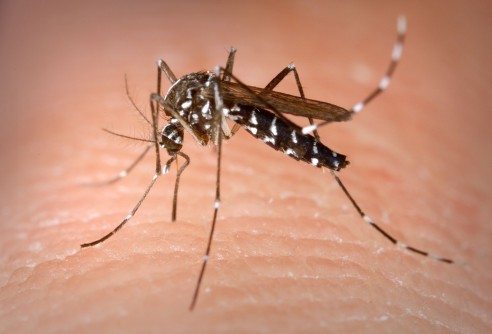 This is an Aedes albopictus female mosquito obtaining a blood meal from a human host. Under experimental conditions the Aedes albopictus mosquito, also known as the Asian tiger mosquito, has been found to be a vector of West Nile virus, according to the Centers for Disease Control and Prevention. 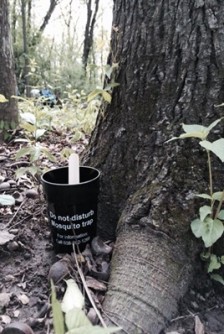 A mosquito trap in Dane County, Wisconsin, in 2016. This style of trap, which collects eggs laid by mosquitos in a cup of water, was used to identify the Asian tiger mosquito, which can transmit Zika virus, in Dane County in 2017.

Newswise — MADISON, Wis. — The new Upper Midwestern Center of Excellence in Vector Borne Diseases, led by the University of Wisconsin–Madison, this week identified the Asian tiger mosquito, which can spread the Zika virus, for the first time in Wisconsin.

The center identified three individuals of the mosquito, Aedes albopictus, on July 17 from a trap set in Dane County in late June. A $10 million grant by the Centers for Disease Control and Prevention (CDC) to a group of Midwestern universities earlier this year established the center and increased surveillance efforts over last year’s.

The identification of Aedes albopictus does not pose an immediate threat to human health, as multiple factors reduce the likelihood of local transmission of Zika in Wisconsin, according to the Wisconsin Department of Health Services.

“This summer we have a lot more capacity to do more sampling,” says Lyric Bartholomay, a UW–Madison medical entomologist and one of the leaders of the vector disease center. “We set traps all over the southern tier of Wisconsin. One of the traps we had set in Dane County produced this Asian tiger mosquito.

“This was possible because we have the people and capacity now to do more surveillance,” says Bartholomay, who is a co-director of the new CDC-supported center.

Aedes albopictus had previously been identified sporadically in Minnesota and Northern Illinois. Southern Illinois hosts one of the northernmost established populations of the mosquito. It is currently thought that cold Wisconsin winters help prevent this species from establishing itself in the state. The individuals identified this week might have arrived from interstate travel, possibly hitchhiking on motor vehicles, says Susan Paskewitz, a UW–Madison medical entomologist who leads the vector disease center with Bartholomay.

Zika, which is linked to birth defects when acquired by pregnant women, is primarily spread by the Aedes aegypti mosquito, which has not yet been identified in Wisconsin or neighboring states. Risks for infection with Zika in Wisconsin include travel to locations with active transmission or sexual contact with travelers.

So far in 2017, four travel-related Zika infections have been confirmed in Wisconsin, compared with 63 cases throughout 2016. There is no evidence of local transmission of Zika in the state.

“With the number of specimens we’ve found, it’s important to be alerted, but not cause for alarm. We’ve only found three,” says Bartholomay. “So far in the Midwest, Aedes albopictus has not been associated with transmission of Zika virus.”

With long-term support, the center will be monitoring how disease vector populations move throughout the region over time. Identifying trends can help the center mitigate health risks.

“This is a regional center,” says Paskewitz. “We’re now working much more closely with universities and public health partners in Minnesota, Iowa, Illinois and Michigan.”

“We will continue our surveillance into the summer for these vectors.”