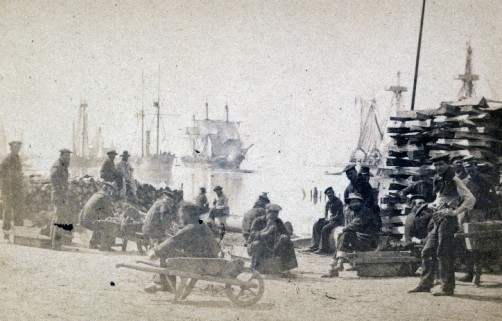 Newswise — A new grant will let a University of Washington-based project add a new fleet to its quest to learn more about past climate from the records of long-gone mariners. The UW is among the winners of the 2017 “Digitizing Hidden Special Collections and Archives” awards, announced Jan. 4 by the Washington, D.C.-based Council on Library and Information Resources.

The new $482,018 grant to the UW, the U.S. National Archives and Records Administration and the National Archives Foundation will support “Seas of Knowledge: Digitization and Retrospective Analysis of the Historical Logbooks of the United States Navy.” This will allow the project to digitize the logbooks, muster rolls and related materials from U.S. naval vessels, focusing on the period from 1861 to 1879.

“Very few of the marine weather observations diligently recorded by Navy officers since the early 1800s have been digitized and made accessible for modern climate and weather research,” said principal investigator Kevin Wood, of the Joint Institute for the Study of the Atmosphere and Ocean, a research center operated by the UW and the National Oceanic and Atmospheric Administration. “The Civil War- and Reconstruction-era logs we are targeting here are particularly useful to fill in and extend our knowledge of past weather conditions around the world, from the mid-19th century to the beginning of the 20th century.”

Wood is one of the leaders of the Old Weather project, launched in 2010, that has transcribed weather records from the British Royal Navy and later the U.S. Navy, Coast Guard and Coast Survey ships that had sailed Arctic waters. A 2015 addition began to digitize the logbooks of U.S. whaling ships that are now at the New Bedford Whaling Museum.

After making digital images of the logbooks housed at the National Archives, the project will recover ships’ positions, weather records, oceanographic data and other historical information through the Old Weather citizen-science program that trains volunteers to transcribe the logs’ handwritten entries. So far volunteers have transcribed more than 3 million new-to-science weather records, and more than 1 million of those have been quality-checked and added into global climate databases.

This historic weather and climate data helps scientists better understand modern climate change patterns and improve prediction. The new effort seeks to fill a gap in the data of past weather and ocean conditions.

“A key point about the U.S. Civil War is that it put a stop to [Naval officer] Matthew Maury‘s pioneering collection of marine weather observations. If you look at the number and coverage of the marine observations we currently have available, you can see a dramatic dropoff in 1861. Coverage didn’t get back to pre-war standards until about 1880,” said collaborator Philip Brohan, a climate scientist at the U.K.’s national weather office and Old Weather science team leader. “This project will go some way to repairing the damage. And it’s a credit to the National Archives that such a repair is still possible, even 150 years later.”

The project will also digitize the National Archives’ related collection of muster rolls that shows the names of all the enlisted sailors on board. When combined with logbooks that list the names of officers, this will provide historians and family researchers an online database of unprecedented detail and a window into day-to-day life during this period in history, Wood said. The grant also will support an educational effort that will allow the public to explore the information uncovered in the ships’ logbooks through an interactive exhibit.

This is the third group of projects to win a Digitizing Hidden Special Collections and Archives award, which is supported by The Andrew W. Mellon Foundation. The program supports the creation of digital representations of unique content of high scholarly significance that will be discoverable and usable as elements of a coherent, national collection.