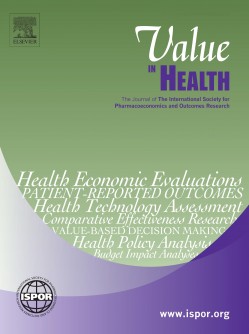 Newswise — Princeton, NJ—June 21, 2017—The International Society for Pharmacoeconomics and Outcomes Research (ISPOR) announced that the impact factor for Value in Health, the Society’s official journal, has increased to 4.235 based on new data released by Clarivate Analytics’ Journal Citation Reports. This is the fourth year in a row that the journal has demonstrated double-digit percentage growth in its impact factor.

Value in Health publishes scientific content in the field of health economics and outcomes research (HEOR). Under the direction and leadership of Co-Editors-in-Chief, Michael Drummond, MCom, DPhil (University of York, United Kingdom) and C. Daniel Mullins, PhD (University of Maryland, Baltimore, USA), the journal has consistently improved in its overall impact and ranking in the field.

Considered by many as the measure of a journal’s overall reputation and credibility, impact factor data track how frequently a particular journal’s articles are cited by other researchers in the field. Because citation patterns require time to develop and analyze, the impact factor scores that were released this month reflect the number of times articles published in 2014 and 2015 were cited throughout the 2016 calendar year. The calculation is derived by dividing the number of articles a journal has published in the previous two years (2014-2015) by the number of citations those articles receive in the study year (2016). The resultant score—aptly referred to as an “impact factor”—reflects the scientific impact those articles (and by extension, the journal) has in its field.

ABOUT VALUE IN HEALTH

Value in Health (ISSN 1098-3015) is an international, indexed journal that publishes original research and health policy articles that advance the field of health economics and outcomes research to help health care leaders make evidence-based decisions. The journal’s 2016 impact factor score is 4.235. Value in Health is ranked 3rd out of 77 journals in health policy and services, 7th out of 347 journals in economics, and 9th out of 90 journals in health care sciences and services. Value in Health publishes 10 issues a year and circulates to more than 10,000 readers around the world. Web: www.ispor.org/valueinhealth_index.asp | Twitter: http://bit.ly/ISPORjournals-T (@ISPORjournals)