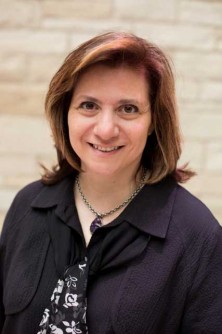 The award, administered by the American Institute of Physics (AIP) and the American Astronomical Society (AAS), cites Kalogera’s “fundamental contributions to advancing our understanding of the evolution and fate of compact objects in binary systems, with particular regard to their electromagnetic and gravitational wave signals.”

Kalogera is the Daniel I. Linzer Distinguished Professor of Physics and Astronomy in the Weinberg College of Arts and Sciences. She also serves as director of Northwestern’s Center for Interdisciplinary Exploration and Research in Astrophysics (CIERA).

Last year, Kalogera was one of four Northwestern astronomy faculty who collaborated with international researchers to detect the spectacular collision of two neutron stars using both gravitational waves and light. She also made leading contributions to the astrophysical interpretation of collisions of black holes detected with gravitational waves alone.

“This gave us the opportunity, for the first time, to test the fundamental predictions of Einstein’s theory of general relativity,” Kalogera said. “Figuring out how black holes, these hard-to-probe objects, actually form in nature is a key question in astrophysics. And probing the dense matter of neutron stars -- the kinds of pressures and densities that we can never reproduce in a regular lab -- is also of prime importance in astrophysics.”

Kalogera is the leading astrophysicist for the Laser Interferometer Gravitational-Wave Observatory (LIGO) Scientific Collaboration. Gravitational waves were directly detected by LIGO for the first time Sept. 14, 2015. Following the discovery, the observatory’s architects were awarded the 2017 Nobel Prize in Physics.

The Dannie Heineman Prize for Astrophysics  was established in 1979 to recognize outstanding work in the field. It is funded by the Heineman Foundation and named after Daniel N. Heineman, an engineer, business executive and philanthropic sponsor of the sciences. The annual prize includes a $10,000 award.

“It’s a great honor to receive the Heineman Prize,” Kalogera said. “I’m grateful to my early mentors and to have had the opportunity to work with talented collaborators, students and postdocs as we pursued key questions that connected to the beginnings of a new field in astrophysics.”

“Her research on compact objects has advanced the science of astrophysics and our understanding of the life cycle of extremely dense objects in space,” Randolph said. “We are extremely proud of Vicky’s accomplishments and look forward to even greater discoveries from her in the years ahead.”

Jay Walsh, vice president for research at Northwestern, said Kalogera is among the world’s leading authorities on compact astrophysical objects. He said that through her deep disciplinary knowledge, Kalogera made important contributions to the global LIGO project’s recent landmark discoveries.

“Vicky’s leadership at Northwestern has been phenomenal, too,” Walsh said. “She has galvanized the University’s strengths in astronomy, including in her capacity as director of CIERA. She also has the remarkable ability to translate complex science into more accessible language, conveying the importance and excitement of discovery without sacrificing the underlying rigor of that research. In doing so, she is a wonderful ambassador for her field and for Northwestern, inspiring us to continue boldly exploring the most profound cosmic mysteries.”