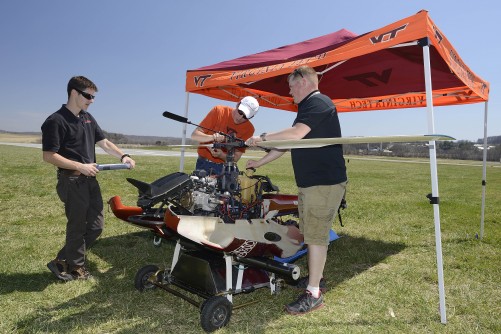 Lance Holly, James “J.P.” Stewart, and Chris Morrell, all Virginia Tech mechanical engineering students associated with the Virginia Center for Autonomous Systems, prepare to launch an unmanned, autonomous helicopter equipped with sensors to detect trace amounts of radiation. This technology could be used to aid in mapping radioactivity after a Fukushima-type event.

Newswise — Virginia Tech Unmanned Aircraft System researchers will be available for interviews May 12 through May 15 at the 2014 Association for Unmanned Vehicle Systems International conference in Orlando.

Virginia Tech’s terrestrial robots have successfully competed in several DARPA Challenges, including both Grand Challenges and the Urban Challenge.

One of its teams won the Ground Unmanned Support Surrogate in the JIEDDO Counter-IED Endurance Challenge at Robotics Rodeo at Fort Benning, Ga. The company, TORC Robotics, comprised mostly of Virginia Tech young alumni, some of whom participated in the first DARPA challenges, has been a long-time partner with the Virginia Tech engineering student design teams for terrestrial robotics events.

Among the aerial technologies investigated by Virginia Tech’s Unmanned Systems Lab, one focuses on first responders. This lab, under the lead of Kevin Kochersberger, partnered with the Department of Energy to complete a $1.5 million dollar project to aid first responders in an event such as the nuclear power plant meltdown at Japan’s Fukushima Daiichi.

Kochersberger’s research group developed the technologies to use an autonomous helicopter platform to generate a three dimensional environment to aid in first responders ingress and egress routes; sense radiation levels; determine operational boundaries and containment zones; and lastly developed a custom robotic system deployable from the helicopter to collect particulate and chunk samples from the site for further analysis by scientists.

Another example of unmanned aerial systems aiding civilians is in the event of lost hikers and campers in the wilderness. Currently, graduate students in the lab are mentoring a team of undergraduates from a variety of engineering disciplines to accomplish this task using an autonomous airplane. Virginia Tech students use both vision and infrared based camera technologies to find the “lost” hikers, as well as developed a platform that can drop supplies to them.

Other projects for students and researchers in Kocherberger’s lab have included working with farmers in the region to use unmanned aerial vehicles for crop health monitoring; working with police forces to create lighter backpackable robotic systems; developing morphing wing designs that configure and change their shapes for flight conditions; and many other various projects that involve unmanned systems technology.

Much of this work finds its way into commercial products, archival publications, and student competitions against rival engineering schools. See related article.

In the maritime subsurface robotics, work is ongoing with submarine control, gliders in currents and high-speed AUVs. Funding comes from such government agencies as the Office of Naval Research, the Department of Energy, and the Department of Agriculture.

Learn more about SAFFiR, including segments from Fox News and BBC.