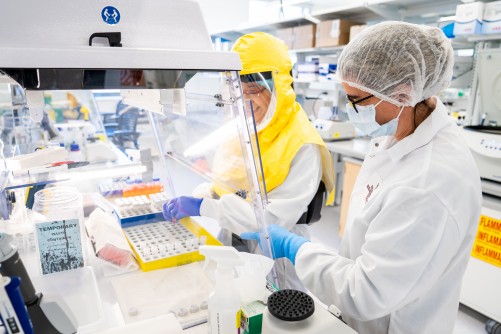 Scientists at work at the Fralin Biomedical Research Institute at VTC. Virginians say investing in research is important to the state's economy, according to a new survey commissioned by Research!America in partnership with Virginia Tech.

Newswise — Virginians across the political spectrum — 84% — say investing in research is important to the state’s economy, according to a new survey released today. Commissioned by Research!America in partnership with Virginia Tech, the April survey captures Virginians’ views on the economic impact of biomedical research and opinions on other public health and science issues.

Research!America President and CEO Mary Woolley will share the survey results as part of a Virginia Research & Innovation event this afternoon at the Fralin Biomedical Research Institute at VTC in Roanoke. The event focused on the state and national impact of research and innovation.

“It’s wonderful to see the strong support Virginians have for scientific research and innovation. Investment in research is vital to economic growth, public health, and global competitiveness,” said Woolley. “We are proud to partner with Virginia Tech to better understand public opinion in Virginia to reveal opportunities to accelerate research engagement, STEM education, and other areas to help the commonwealth — and the nation — to prosper.”

Approximately 8 in 10 Virginians say it's important for the commonwealth to be a leader in several areas important to the economy as well as quality of life, such as education (82%), agriculture (79%), and medical and health research (78%). However, the perception is there's still a significant need for growth. A relatively low 6 in 10 Virginians feel the commonwealth is currently a leader in those same areas of education (62%), agriculture (67%), and medical and health research (62%).

“The public’s responses give a voice to sustained and enhanced support for the research enterprise across all of the state’s universities and with industry,” said Michael Friedlander, Virginia Tech’s vice president for Health Sciences and Technology and executive director of the Fralin Biomedical Research Institute.  “At Virginia Tech, we are pleased by the strong support for research in several areas of our emphasis in the health sciences, including children’s health, mental health and addiction, and translational research and commercialization to advance human and animal health.”

Many additional important findings will be announced and discussed at the event. The presentation will also look at how Virginians’ responses compare with a national survey conducted in January.

For 30 years, Research!America has commissioned surveys to help understand public support for medical, health, and scientific research, among other state, national, and global issues related to public health, research, and innovation.

The online survey was conducted by Zogby Analytics on behalf of Research!America in March and April among 1,003 adults in Virginia. The survey has a theoretical sampling error of +/- 3.1 percentage points.