19-May-2014 9:55 AM EDT, by Homeland Security's Science And Technology Directorate
favorite_border 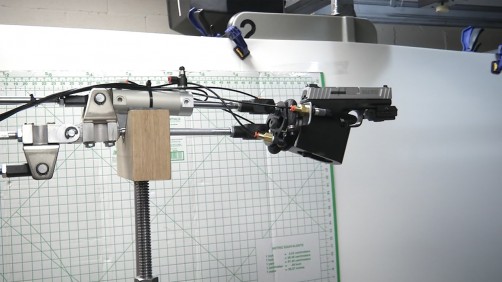 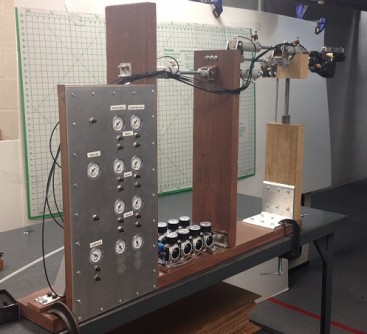 Newswise — Firing and testing thousands of rounds of ammunition weekly can challenge the human body—even ones in top physical condition—causing debilitating stress injuries and chronic nerve and joint pain. The Department of Homeland Security (DHS) Science and Technology Directorate (S&T), with the help of agents from the U.S. Immigration and Customs Enforcement (ICE) Office of Firearms and Tactical Programs (OFTP) Armory Operations Branch (AOB), has made an important stride forward in reducing or eliminating these injuries by developing of the “Virtual Shooter.”

“The Armory Operations Branch evaluates most of the department’s ammunition and firearms. This equates to testing more than 200,000 rounds of ammunition and a variety of handguns annually before they are approved for use in the field. This repetitive firing takes a toll on the shooters and results in stressed joints, debilitating pain, and other physical injuries. The Virtual Shooter will go a long way in in reducing, if not eliminating, those injuries,” explained John Price, the S&T First Responder Group (FRG) program manager.

The OFTP assists ICE by providing personnel with firearms, intermediate force weapons, protective equipment, training, guidance, as well as tactical and logistical support while also providing armory services to the U.S. Customs and Border Protection and the Federal Protective Service under shared service agreements. The unit increases safety and improves the tactical proficiency of the armed workforce, while maintaining accountability for property.

“The OFTP AOB mission is to improve the safety of the armed DHS agent,” explained Lowell Johnson, ICE OFTP AOB supervisory engineer. “The Virtual Shooter will benefit us by reducing debilitating injuries to our employees, as well as being an instrument to give us consistent data on firearm and ammunition performance.”

FRG developed the Virtual Shooter as part of the Small Business Innovation Research Program initiative and began working to develop a device with designs that simulated the movements and reactions of human firers, while responding to feedback provided by ICE OFTP AOB throughout the development process.

“The AOB told FRG they wanted something they could put a handgun in, and it would fire just like a human would fire, with all the movement, motions, and stresses,” Price said. The Virtual Shooter absorbs the impacts and prevents injuries, and the AOB agents can observe how the weapons and ammunition perform.

“We were very satisfied with the initial prototype. It met all of the original performance specifications in the original SBIR solicitation,” said Johnson. He said he plans to implement the Virtual Shooter into OFTP’s testing process.

Over the next year, Radiance Technologies will develop and deliver the second and final prototype to the ICE OFTP AOB in early 2015. The model will then be available commercially for government and industry use. 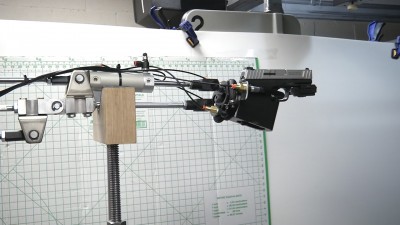 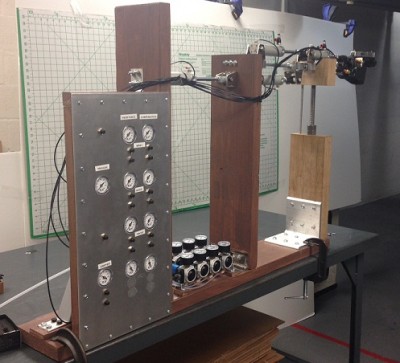