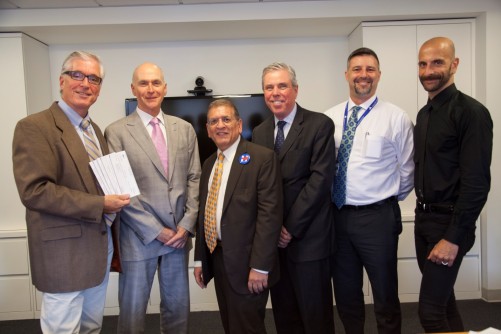 The award recognizes and supports HIV care providers within the Mount Sinai Health System for outstanding patient care, resulting in successful control of HIV infection among many plan members. More VNSNY CHOICE SelectHealth members with suppressed viral loads are treated by Mount Sinai than by any other health system.

“We’d like to acknowledge how well Mount Sinai performed in caring for our plan members with HIV,” said Eli Camhi, VP and General Manager for VNSNY CHOICE SelectHealth. “The real winners here are the members.”

“VNSNY CHOICE SelectHealth recognizes that the promise of HIV therapy to prevent the ravages of AIDS and restore to health even those with advanced disease is only realized through the commitment and efforts of expert, caring health providers teaming up with informed, motivated patients. VNSNY CHOICE SelectHealth hopes the recognition of these providers will enable even greater efforts and success in the future,” continued Jay Dobkin, MD.

SelectHealth’s focus is to ensure its HIV-positive members receive antiviral treatment and achieve a sustained and suppressed HIV viral load (<200 copies/ml). This program, which has its roots in value-based care and is consistent with the goals of Gov. Andrew Cuomo’s “Ending the Epidemic” efforts, evaluated data retrospectively for 2015 and rewarded HIV primary care practices for maintaining an HIV viral load in their patients of less than 200 copies/ml. Members of SelectHealth receive care through a team that includes an HIV-experienced primary care provider, care managers, pharmacists, and a wide variety of other specialists. Additional care coordination is offered through health homes and community-based providers.

“SelectHealth is a strong partner with Mount Sinai in providing HIV primary care,” said Matthew Baney, Senior Director of the Institute for Advanced Medicine, which directs all of Mount Sinai’s HIV prevention and treatment programs and cares for more than 10,000 patients annually. “We have a long history of working well together and putting quality in front of all else. It also helps that we use EPIC, a standardized medical record system that captures the quality metrics required for state-of-the art care. This award from SelectHealth reflects the efforts on both of our parts to provide the best care to patients throughout our Institute, and underscores the firm commitment of our staff to deliver on quality.”

The System includes approximately 7,100 primary and specialty care physicians; 12 joint-venture ambulatory surgery centers; more than 140 ambulatory practices throughout the five boroughs of New York City, Westchester, Long Island, and Florida; and 31 affiliated community health centers. Physicians are affiliated with the renowned Icahn School of Medicine at Mount Sinai, which is ranked among the highest in the nation in National Institutes of Health funding per investigator. The Mount Sinai Hospital is in the “Honor Roll” of best hospitals in America, ranked No. 15 nationally in the 2016-2017 “Best Hospitals” issue of U.S. News & World Report. The Mount Sinai Hospital is also ranked as one of the nation’s top 20 hospitals in Geriatrics, Gastroenterology/GI Surgery, Cardiology/Heart Surgery, Diabetes/Endocrinology, Nephrology, Neurology/Neurosurgery, and Ear, Nose & Throat, and is in the top 50 in four other specialties. New York Eye and Ear Infirmary of Mount Sinai is ranked No. 10 nationally for Ophthalmology, while Mount Sinai Beth Israel, Mount Sinai St. Luke's, and Mount Sinai West are ranked regionally. Mount Sinai’s Kravis Children’s Hospital is ranked in seven out of ten pediatric specialties by U.S. News & World Report in "Best Children's Hospitals."

About VNSNY CHOICE Health PlansCreated in 1998, VNSNY CHOICE is the managed care affiliate of the Visiting Nurse Service of New York and shares its mission of compassion and care for the poor, the chronically ill and elderly. Our guiding principle is to help the most vulnerable among us live safely and independently for as long as possible in their own homes and communities. On any given day, VNSNY CHOICE coordinates care for more than 40,000 members through its array of Medicare and Medicaid health plans, including Medicaid Long Term Care, Medicare Advantage, and a HIV/Special Needs Plan. With offices in Manhattan, Brooklyn and upstate New York, VNSNY CHOICE health plans are available in the New York City metropolitan area as well as on a plan basis in selected counties throughout New York State.Medicaid recipients living with HIV/AIDS and/or live in a HRA shelter who are residents of the Bronx, Brooklyn, Manhattan or Queens are eligible to enroll in VNSNY CHOICE SelectHealth.