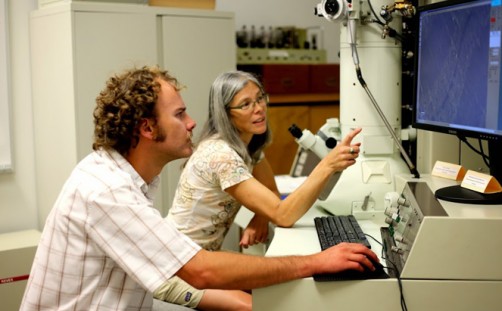 Kiisa Nishikawa and Brent Nelson bring biology and engineering expertise to a team attempting to produce a direct observation of the protein titin.

Newswise — Devising a way to see something that has yet to be seen takes big ideas, teamwork and the support of those who understand the value of a calculated risk.

That confluence of forces has delivered a $1 million award from the W. M. Keck Foundation to a transdisciplinary research team at Northern Arizona University, which aims to transform current understanding about muscle contraction.

Led by Regents’ Professor Kiisa Nishikawa, a biologist, the group has been working for six years to refine a winding filament hypothesis that remains one tiny step away—literally nanometers—from widespread acceptance. The convincing evidence would be direct observation of the protein titin, no wider than a strand of DNA, winding on thin filaments in muscle fibers.

“If our idea is right, it could change the way we think and do things in physiology, medicine and robotics,” Nishikawa said. “This award gives us the opportunity to really get the ball rolling.”

Nishikawa has built a respected reputation through her research on titin and its role in local control of muscle stiffness. Studies of toads, chameleons and salamanders by Nishikawa and her students have reinforced the idea. Still, some skepticism remains that only hard evidence can dispel.

Now, teamed with faculty in physics, engineering and biochemistry, and an array of students from doctoral candidates to undergraduates, Nishikawa is poised to develop the tools that will allow visual confirmation of her “elegant” hypothesis.

“We have demonstrated that the hypothesis fills existing gaps between theory and experiment, but we need to see proteins interacting at the nanometer scale,” Nishikawa said.

Doing so will require modifying methods and equipment that are unable to do the job, as currently configured, while preserving the integrity of sensitive biological material. Chris Mann, assistant professor of physics and astronomy, and Brent Nelson, associate professor of mechanical engineering, bring their expertise in nanoengineering, holography and tomography to the project, while Matthew Gage, associate professor chemistry and biochemistry, will develop methods using fluorescence to visualize titin-actin interactions in real time in active muscle fibers.

“We would expect to see the interactions that we’ve hypothesized,” Nishikawa said, noting that the work is expected to take two to three years. “If we didn’t have the funding from the W. M. Keck Foundation, it would take 10 to 15 years to get there,” she said.

NAU President John Haeger credited the team for its persistence in obtaining the prestigious Keck award and demonstrating the practical and educational benefits of research.

“An award of this magnitude from such a widely respected foundation demonstrates that NAU can be a leader in bioscience,” Haeger said. “Our outstanding faculty, and the students and staff who support them, have earned this award through their excellent work and a sincere enthusiasm for discovery. I look forward to what they achieve next.”