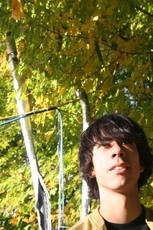 University of Vermont forestry student William Young looks into a maple tree at the US Forest Service Research Station in Burlington, VT, October 2008. Behind him, antifreeze is being pumped up into the tree cooling some branches to see how it affects leaf color. It's all part of University of Vermont research that asks: why do leaves go red?

Newswise — On a hushed autumn morning, when leaves have ripened to the fall, who hasn't stood under a flaming maple and wondered why it goes red?

Though Robert Frost might have imagined something more poetic, tree physiologists will tell you the answer is anthocyanin. This is the pigment that leaves produce in autumn, creating the bright displays of red and purple foliage that draw thousands of wistful tourists (and their wallets) to New England.

But chemistry is not cause. "We know the basic biochemical reasons (leaves go red)," says US Forest Service researcher Paul Schaberg — under stress, leaf sugars are converted to anthocyanin — "but the ecology and exact mechanisms are still unknown." Why does a maple go yellow one year and red the next? Are cold nights the trigger? Does the red color serve to deter insect pests? "There are dozens of competing theories," he says.

Which is why he and his intern, University of Vermont forestry student Will Young, are peering up into a sugar maple outside the Forest Service Research Station on Spear Street in Burlington, VT. Below the tree, they've installed a tarp-covered freezer, festooned with blue wires and silver tubes that run up into the branches. Inside the tubes, antifreeze flows to selected twigs and keeps them colder than the surrounding branches.

And, sure enough, the chilled branches displayed brilliant red leaves last week and are now a naked November grey, while the surrounding branches are still covered with yellow leaves. "If we can understand what triggers anthocyanin production — cold is clearly part of the picture — then we can better understand the reasons why the tree produces anthocyanin," Schaberg says. "It comes at a metabolic cost to the tree late in the season to make the pigment; so, what are the benefits?"

To explore this question, Schaberg and Paula Murakami, his colleague at the Forest Service, have been collaborating with University of Vermont researchers John Shane, Gary Hawley and others in UVM's Rubenstein School of Environment and Natural Resources.

For decades, forestry textbooks claimed that anthocyanin served no function as trees prepared to drop their leaves; it simply became visible as green chlorophyll molecules broke down in autumn. But more recent research from around the world has proposed numerous ways that anthocyanin could benefit trees in autumn: as a sunscreen to protect leaves from excess light, as an antioxidant to help repair leaf damage, and to help resist cold and drought. In short: it's made, not left over.

A recent paper in the journal Trees, co-authored by Forest Service and UVM researchers, showed that in sugar maples the stems of red-colored leaves were more firmly attached than their yellow brethren. This observation adds another piece to the hypothesis that Schaberg and his colleagues have been exploring: anthocyanin may allow trees to keep absorbing sugars and nutrients from leaves later into the fall — an obvious advantage for a sugar maple living on a cold mountainside with a short growing season.

"Me? I just climb up and down ladders with duct tape," says Will Young, with a grin, as he carefully places tiny disks of chopped leaf into a test tube of methanol. As part of a USDA minority scholarship he received through the Rubenstein School, each week Young works with researchers in labs at the Forest Service and on campus, as they measure sugar levels, record chlorophyll content, and search for clues about how a maple makes a living.

"In Natural Resources 1, my first day here, we talked about why leaves turn red," Young says. "This is Vermont. Everyone cares about red leaves."

And one of the reasons people care about red leaves is that their role in Vermont's landscape — and economy — may be under threat from climate change.

"Like the team at the Forest Service, we're asking a basic question about how temperature affects leaf color. The hypothesis is that cool, but not freezing, nights promote anthocyanin development," van den Berg says.

"But underlying this basic question, we want to be able to better predict how climate change is going to affect fall coloration," she says.

At the Proctor Center, the researchers have about 200 seedlings in pots. Some, in a refrigerated blue tub, are kept colder than the surrounding air — one group only at night, others all the time. Over the fall, van den Berg has been monitoring the seedlings' color development with a digital camera and using a handheld meter to measure anthocyanin and chlorophyll content.

"Cold at night may prevent the leaf from exporting all the sugars it made during the day into the twig and therefore they get trapped in the leaf," she says. And these sugars are the backbone of anthocyanin synthesis — "they provide the precursors," she says. With a warming climate, the researchers want to know how this process will change, perhaps cutting, extending or delaying the "leaf peeping" season.

At the end of their three-year project, funded by the USDA, van den Berg hopes to have a clearer forecast about the future of red foliage.

"Our primary focus here at Proctor is maple syrup production, but a lot of those producers depend on fall tourism to sell their product. Leaf season really permeates throughout local economies all year long," van den Berg says. The Vermont Department of Tourism tallied visitor spending during last year's fall tourism season at $363 million.

And climate change may affect not just the leaves but the tree species of New England's forests too. "If we lose our sugar maples or our red maples (to climate change)," van den Berg asks, "what is that going to do to our fall color?"