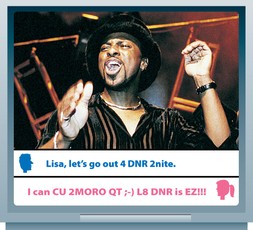 Indiana researchers have found that when men and women text message each other in a public, interactive dating market, it is the women who use more non-standard, expressive language techniques.

Newswise — The book "Men Are from Mars, Women Are from Venus" and its gender stereotypes on how the sexes communicate remains fodder for debate, but two Indiana University researchers have confirmed one thing: When men and women talk through technology, it's the women who are more expressive.

In an article in the latest edition of the quarterly journal Written Communication, IU researchers Susan Herring and Asta Zelenkauskaite show that while men historically talk more in public settings, when the exchanges occur via text messaging in a public venue -- in this case, Italy's real-time interactive music television channel Allmusic -- it is the women who push their messages closest to the character-count limit, who use more abbreviations and insertions, and who implement more emoticons (like smiling and frowning faces).

"The messages are very flirtatious and have nothing to do with the television show," said Herring, a professor in the IU School of Library and Information Science. "In the linguistic marketplace there have always been different values associated with standard and non-standard language, and here we have found results that are paradoxical, that are the opposite of the recognized socio-linguistic gender patterns."

Women use standard language more than men, in part because it is seen as a type of symbolic currency used to acquire upward mobility, the preponderance of research has shown.

"Women have historically used standard language when they are social aspirers, or want to be perceived as above their station," Herring said. "Men talk more; women are more polite."

But that historical footnote falls apart under the influence of computer-mediated communication such as short message services (SMS) and text messaging, the researchers found, after looking at 1,164 gender-defined messages posted on-screen during the real-time Italian music video program.

Expecting findings consistent with past research on gender-patterned public communication, Herring and Zelenkauskaite were predicting men would post more and longer text messages, and that men would also employ more non-standard techniques. Instead, the opposite was true when it came to communication within a new, convergent medium that mixes interactive television (iTV) with SMS or texting.

The study found women used more non-standard language such as abbreviations or expressive insertions that represented characteristics including enthusiasm, sadness, emphasis and individuality. And while women were both more economical and expressive, they also came closer to maxing out, or did max out, on the 160-character message limit more often than their male counterparts.

"Since iTV is based on texting, which was marketed extensively in Europe, it is extremely popular," said Zelenkauskaite, a doctoral student and native of Lithuania who has spent more than two years studying at Italian universities. "Since cell phones in Italy experience some of the highest levels of penetration in Europe, it is an ideal country to study iTV."

Now the researchers say they want to explore whether they could identify similar amounts and types of non-standard language in text-messaging when different topics available for interactive, public discussion -- like politics or news-oriented programming -- are studied.

"There are news shows in Europe where viewers can comment through iTV but we have not analyzed any of those yet," Herring said. "There are different linguistic marketplaces, and politics is one of them, just like dating is."