Science at Wistar: Toward HIV Eradication 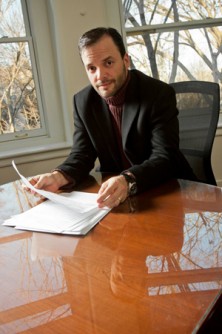 Newswise — PHILADELPHIA—(Monday, January 13, 2014)— A multi-institutional research team led by Luis J. Montaner, D.V.M, D.Phil., a professor at The Wistar Institute and director of Wistar’s HIV-1 Immunopathogenesis Laboratory, has received a four-year, $6.2 million grant from the National Institute of Allergy and Infectious Disease of the National Institutes of Health to hold a trial of a new therapeutic strategy that has shown strong signs that it can diminish the amount of persistent HIV-1 virus residing in the cells of people with HIV/AIDS. While current therapies for HIV/AIDS hold the HIV-1 virus at bay, they do not reduce the amount of virus within patients, which is a necessary first step toward a cure.

Earlier this year, Montaner published the results of a pilot trial showing that interferon-alpha, a protein that modulates the immune system, can reduce the persistent amount of HIV-1 residing in people with HIV/AIDS currently treated with antiretroviral therapy.“An HIV cure will require going beyond current therapies, and our strategy has shown that it can do that,” said Montaner. “With this funding, Philadelphia will hold the largest randomized trial anywhere focused on testing an easily accessible strategy to advance an HIV cure.“

In collaboration with multiple clinics across Philadelphia and under the overall clinical supervision of Jay R. Kostman, M.D., a clinical professor of Medicine in the division of Infectious Diseases at the Perelman School of Medicine at the University of Pennsylvania, the team will now expand current studies to include a randomized clinical trial on 54 subjects designed to conclusively establish the effectiveness of this strategy. “We expect to show that interferon will ‘drain the viral reservoirs,’” said Kostman. “That is, we expect to decrease the total amount of HIV-1 that persists in the cells of people with HIV/AIDS. We also want to know how this immunotherapy can be put into clinical practice safely and effectively.”

The trial calls for a 20-week treatment course of pegylated interferon, a modified form of an antiviral chemical produced by the human immune system and already clinically available for treating other viruses. The team is comprised of investigators and clinicians based at The Wistar Institute, University of Pennsylvania, University of California, Merck, and Philadelphia FIGHT.

“We are taking a real shot at the HIV latent reservoir bolstered by the exciting findings from our proof of concept study,” said Karam Mounzer, M.D., Medical Director and Clinical Investigator at Philadelphia FIGHT.

Interferon-alpha is a chemical naturally manufactured by the human immune system to “interfere” with the ability of viruses to replicate within cells. Since human interferon does not persist long enough in the body to serve as a useful antiviral drug, pharmaceutical researchers modified it by adding polyethelyne glycol (PEG) to the interferon molecule, making it last longer in the bloodstream with less toxicity. This “pegylated” form of interferon was approved in 2008 to treat hepatitis B and C infections.

According to Montaner, attempts to use interferon in the early days of HIV treatment were largely unsuccessful as its antiviral activity was tested in absence of current therapy. “Today treatment against HIV has resulted in the recovery of immune function from the insult of HIV,” Montaner said, “we now can use a ‘recovered’ immune system due to the suppression of HIV by adding immune stimulation to go after the HIV that persists.”

The new trial follows a smaller-scale study conducted in 2011 on 20 persons, which showed a dramatic decrease in HIV-1 after patients where taken off antiretroviral therapy for 6 months while maintaining treatment with pegylated interferon. Remarkably, about half of these patients were able to sustain viral control under 400 copies per milliliter and a similar frequency showed more than 50 percent reduction in circulating HIV reservoirs. A second pilot follow-up study on 25 subjects is underway which will further add to the data to be collected by the new randomized trial.

In the new study, Montaner and his colleagues will recruit 54 additional volunteers into three study groups, two of which will receive pegylated interferon-alpha in addition to their ongoing antiretroviral therapy. The researchers will determine whether the added immune “booster” therapy will activate a patient’s innate anti-HIV response and reduce HIV levels throughout the body including known measures for HIV reservoirs when compared to third group, which will remain on their standard retroviral therapy and not receive the interferon-alpha. One of the two boosted groups will include a four-week interruption of their current antiretroviral therapy regimen, to see if the interruption will flush more virus out of hiding where it can be destroyed by the now boosted immune system.

The $6.2 million grant will go to managing the clinical and administrative expenses of the trial as well as the laboratory follow-up that will allow the researchers to quantify their results. Laboratory results look to determine how quickly HIV-1 replicates following interruption of antiretroviral therapy, the amount of HIV DNA integrated into host T cells, and assess measures of the amount of virus hiding in reservoirs. They also look to better understand the mechanics of how the immune system responds to the immunotherapy.

“After all the years in which we watched so many people sicken and die, to glimpse a cure within reach is extremely gratifying,” Jane Shull, Philadelphia FIGHT Executive Director, remarked. “We at FIGHT are extremely excited to be part of this research initiative which culminates work we have been supporting with Dr. Montaner at the Wistar Institute for many years.”

“HIV/AIDS has, in a relatively short amount of time, changed from a death sentence to a chronic disease managed by antiretroviral therapy,” Montaner explained. “Research efforts are now focused on seeing an available treatment that can advance an HIV cure within our lifetime.”

The Wistar Institute is an international leader in biomedical research with special expertise in cancer research and vaccine development. Founded in 1892 as the first independent nonprofit biomedical research institute in the country, Wistar has long held the prestigious Cancer Center designation from the National Cancer Institute. The Institute works actively to ensure that research advances move from the laboratory to the clinic as quickly as possible. The Wistar Institute: Today’s Discoveries – Tomorrow’s Cures. On the Web at www.wistar.org.