With a Little Help, Citizen Scientists Can Be Good Proxies, Research Shows

7-Jul-2014 11:00 AM EDT, by University of Florida Institute of Food and Agricultural Sciences
favorite_border 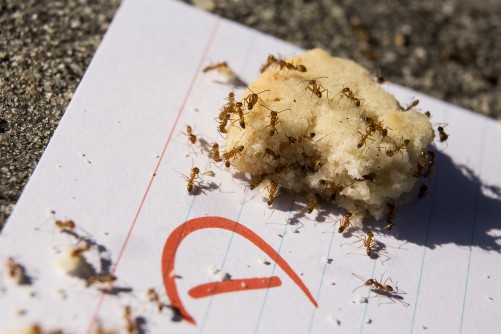 Cutline: Andrea Lucky, an assistant scientist in the UF/IFAS entamology and nematology department, works in her lab. She and researchers from North Carolina State University and Italy are showing through their global School of Ants project that so-called “citizen scientists” can collect ant data just as accurately as trained scientists, if they use a protocol.

Newswise — GAINESVILLE, Fla. – Anyone can collect ant data as accurately as experts, if they have a bit of guidance and the right tools: cookies, index cards and plastic zip-top bags.In a joint project between the University of Florida and North Carolina State University called the School of Ants, participants collected the insects at their homes, work or school. Using cookies to lure the insects, they bagged them, froze them, then sent them to labs so that ant experts could identify them and incorporate them into a national ants map.Researchers at UF and N.C. State examined participants’ errors against mistakes of researchers trained in an N.C. State lab. Data from the two groups were virtually the same. Scientists say the similar findings came because the lay people followed their system. The finding boosts the field of what’s called citizen science, a rapidly expanding area of data collection, said Andrea Lucky, an assistant scientist in entomology and nematology at UF’s Institute of Food and Agricultural Sciences. Lucky started the School of Ants in 2011, while a postdoctoral researcher at N.C. State, and brought the project with her to UF. The project is still going at both universities.

As evidence, Lucky points to this statistic: Nearly 36,000 people visited the School of Ants website from its initial posting in July 2011 until May 2013.

The project invites lay people from the U.S. and partner countries to participate in science. It also maps ant distribution globally. So far, the citizen scientists’ specimens, coming from backyards and sidewalks in every state, included seven exotic species and 107 native ones.

In that study, published online today in the journal Ecosphere, Lucky, N.C. State scientists and Italian researchers addressed some scientists’ criticism that citizen-gathered data includes too many errors.

So the research team decided to put that claim to the test.

In the first 17 months of the project, from July 2011 to December 2012, volunteers collected ants at about 500 sites nationwide. The authors logged 814 submitted collections, and of those, 599, or 74 percent, were valid for further scientific use.

More tests showed no difference in diversity of ants collected by trained versus untrained participants, showing citizens can contribute reliably to such projects, Lucky said. Scientists plan to work with their citizen science partners to design and conduct further experiments inspired by the School of Ants project.

Lucky co-wrote the paper with Amy Savage, a postdoctoral scholar; Lauren Nichols and Lenora Shell, research assistants and Robert Dunn, an associate professor, all from N.C. State’s Department of Biological Sciences; Cristina Castracani, a research assistant; Donato Grasso, a senior researcher and Alessandra Mori, an associate professor, all from the University of Parma in Italy.