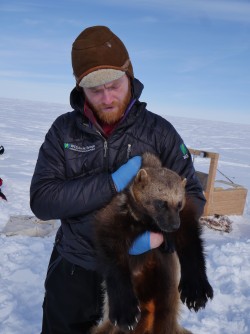 A WCS-led research team, working in cooperation with the Alaska Department of Fish and Game has successfully placed satellite collars on two wolverines as part of a study to see how these elusive predators are faring on Alaska’s North Slope.

**NEWS FROM WCS** CONTACT: SCOTT SMITH: (1-718-220-3698; [email protected])STEPHEN SAUTNER: (1-718-220-3682; [email protected] WOLVERINES! WCS Arctic Team Collaring Elusive Predators on Alaska’s North Slope • Two animals have been collared so far• High-tech traps send email via satellite to researchers when animals enter• Study is investigating how climate change may affect wolverine habitat• Wolverines are fierce predators; can kill moose 20 times their own size WCS NewsroomTwitter: https://www.twitter.com/WCSNewsroom/status/723501313171009536 Newswise — UMIAT, ALASKA (April 22, 2016) – A WCS-led research team, working in cooperation with the Alaska Department of Fish and Game has successfully placed satellite collars on two wolverines as part of a study to see how these elusive predators are faring on Alaska’s North Slope. Braving minus 30 degree temperatures, the researchers set high-tech traps along river and stream that send emails to researchers when sprung. Then, once an animal is collared, data is sent back daily, which allows tracking animals in near real time. This greatly facilitates collecting scat for diet analysis and locating dens. So far researchers have learned that wolverines prefer to dig inconspicuous dens in deep snow drifts on the banks of small streams. Wolverines dig small inconspicuous holes for dens, making finding them extremely difficult. WCS researchers use tracking techniques on the ground (covering over 45 miles of wolverine tracks) and from planes to locate dens. This led researchers to discover many active holes, and confirm one active den so far. They have also obtained what may be the third set of photos ever taken of a mother wolverine with kits in the wild. Wolverines live in the Arctic regions of Eurasia and North America where they prefer tundra, boreal forest, and high elevation mountains. Adults typically weigh 20 to 50 pounds and have a dark brown coat with a distinct light tan band around their sides. Though relatively small, wolverines have been known to kill adult moose weighing more than 20 times their size. Wolverines are currently being considered for listing under the endangered species act in the contiguous United States due to climate change. Populations in Arctic Alaska are relatively stable, however their reliance on snow drifts for denning and caching food may be at risk due to a rapidly changing climate. Their habitat has recently been linked to persistent spring snow cover, but the exact nature of the relationship is uncertain. WCS researchers hope to learn whether denning and den location plays a role in this, hypothesizing that the animal may require deep drifts to safely raise young. Though wolverines are widespread in the Arctic, their habitat may be threatened in the lower 48, and finding out their exact habitat requirements is crucial to their persistence. “Wolverines are an iconic symbol of wild northern places,” said Martin Robards, Director of WCS’s Beringia program. “Understanding their needs in this extremely challenging – but rapidly changing – landscape will allow conservationists to understand how to protect them and other wildlife of the high Arctic.” Partners in the project include the Bureau of land management, Alaska Department of Fish and Game, University of Alaska, and North Slope Borough, and Northwest Arctic Borough. The research is part of WCS’s Beringia program – a tri-national effort to protect one of the most productive marine areas and landscapes on the planet shared by the U.S., Canada and Russia. WCS aims to protect Arctic wildlife such as polar bear, walrus, arctic fox, muskoxen, seals, and shorebirds – and wolverines – from pressures related to a rapidly changing climate and the onset of new industrial development. At the same time, WCS works to ensure the region’s indigenous communities can continue to depend on local resources for food, economic, and cultural vitality. Implementing conservation in such a rapidly changing environment can only be effective through working with scientists, local experts, and indigenous communities. The trapping portion of the wolverine project continues through the end of April. The project is supported by the Wilburforce Foundation and the M. J. Murdock Charitable Trust as well as Northwest Artic and North Slope Boroughs.