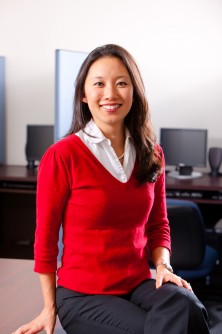 Research by the University at Buffalo’s Lora Park and colleagues shows that pursuit of romance can chill a woman's interest in math and science activities.

Newswise — BUFFALO, N.Y. -- Four new studies by researchers at the University at Buffalo have found that when a woman's goal is to be romantically desirable, she distances herself from academic majors and activities related to science, technology, engineering and math (STEM).

The studies, funded in part by the National Science Foundation, were undertaken to determine why women, who have made tremendous progress in education and the workplace over the past few decades, continue to be underrepresented at the highest levels of STEM.

The research is described in the article, "Effects of Everyday Romantic Goal Pursuit on Women's Attitudes toward Math and Science," to be published in the September issue of Personality and Social Psychology Bulletin.

Lead author Lora E. Park, PhD, UB associate professor of psychology and her co-authors, found converging support for the idea that when romantic goals are activated, either by environmental cues or personal choice, women -- but not men -- show less interest in STEM and more interest in feminine fields, such as the arts, languages and English.

Park says, "When the goal to be romantically desirable is activated, even by subtle situational cues, women report less interest in math and science. One reason why this might be is that pursuing intelligence goals in masculine fields, such as STEM, conflicts with pursuing romantic goals associated with traditional romantic scripts and gender norms.”

Park notes that women, in particular, are socialized from a young age to be romantically desirable, and that traditional romantic scripts in Western cultures are highly gendered, prescribing how men and women ought to think, feel and behave in romantic settings.

"Gender scripts discourage women from appearing intelligent in masculine domains, like STEM," Park says, "and in fact, studies show that women who deviate from traditional gender norms, such as succeeding in male-typed jobs, experience backlash for violating societal expectations. On the other hand, men in gender-incongruent occupations don’t experience the same degree of backlash as women do.”

In Park's studies of more than 350 participants, men and women were exposed to images (Study 1) or overheard conversations (Study 2a, 2b) that cued them to romantic goals or to other types of goals.

In Study 1, participants viewed images related to romantic goals (e.g., images of romantic restaurants, beach sunsets, candles) or intelligence goals (e.g., images of libraries, books, eyeglasses). Participants in Study 2a overheard a conversation about a recent date that someone had gone on (romantic goal condition) or a test that someone had taken (intelligence goal condition). In Study 2b, they overheard a conversation about a romantic date (romantic goal) or about a recent visit from a friend from out of town (friendship goal). After exposure to the romantic, intelligence or friendship goal cues, participants completed questionnaires assessing their interest in STEM vs. other fields and their preference for various academic majors.

Results showed that women (but not men) exposed to cues related to romantic goals reported less positive attitudes toward STEM and less preference for majoring in math or science fields compared to other disciplines. This did not occur when they were exposed to cues associated with intelligence goals or friendship goals.

The final study, Study 3, used a more explicit method of assessing goal pursuit by recruiting women who were interested in pursuing a degree or a career in STEM and asking them to answer questions on a PDA (personal digital assistant) device every night for 21 nights.

Overall, the findings from these studies show that women’s romantic goal strivings, which can be triggered by environmental cues or by personal choice, have important implications for the gender gap in attitudes and interest in math and science.

Park's research investigates questions pertaining to the self, self-esteem, motivation, and interpersonal processes. In particular, she examines how aspects of the person and the situation interact to influence goal pursuit, performance, psychological well-being and interpersonal functioning. Her research has appeared in many professional journals and is funded by the National Science Foundation.