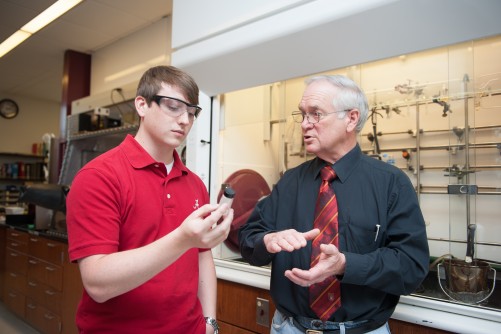 Newswise — Researchers at The University of Alabama, in collaboration with colleagues in Germany, have developed a new way to use wood or other kinds of biomass to make chemical materials without relying on the usual non-renewable petrochemical starting materials.

The idea, the researchers said, is to produce everyday products from renewable resources while remaining economically competitive and without harming the environment. Toward that end, researchers, including Dr. Anthony J. Arduengo III, the Saxon Professor of Chemistry at UA, show that traditional petroleum-based products can be synthesized in a way that recruits all the carbon atoms of a molecular skeleton exclusively from wood-based raw materials.

Arduengo and his associates have collaborated with researchers at the Johannes Gutenberg University in Mainz, Germany. They have established an international collaborative research consortium StanCE, or Sustainable Technology for a new Chemical Economy, to develop and implement their innovations.

“This is an exciting result and an important step both technologically and economically,” Arduengo said. “Imagine chemical synthesis as constructing important materials for our modern life from Lego©-like building blocks.”

Conventional petrochemistry provides a limited variety and shape of these building blocks, he said. Considerable energy and effort must be invested to re-shape the basic building blocks from petroleum into the various units needed to build more complicated objects.

“Wood, a renewable resource that’s easily accessible, offers the opportunity to directly harvest a wide range of building blocks with diverse chemistries and structures that can then be used to build materials for the modern world,” he said.

Arduengo sees the use of wood in the chemical industry as a game-changer.

“Just imagine a modern ‘oil boom’ or ‘gusher age’ that is not based on oil and petrochemicals, but rather the renewal resource of wood – a ‘Xylochemical’ revolution or boom, ” he said. “Alabama, with its extensive well-managed forests, is center stage for this new technological and economic boom.”

The UA team, led by Arduengo, focuses on fundamental chemical reactivity and structure at a molecular level and strives to make the most effective use of the inherent properties of wood ingredients for the new sustainable chemistry.

The group, which includes Dr. Jason Runyon, UA visiting scientist in chemistry, is supported by initial funding from a UA Research Grants Committee Award through the Office of the Vice President for Research and Economic Development, which helped establish the StanCE consortium. The collaboration with the German team, led by Dr. Till Opatz, began two years ago after discussions at a conference in Goslar, Germany, Arduengo said.

“As we began discussing chemical challenges in the modern world, it quickly became apparent that many of us had complementary skill sets and interests that enabled us to tackle some of today’s grand technological and social challenges,” he said. “Not only did our skill-sets mesh well, but our varied backgrounds in industry and academics facilitate novel conceptual approaches to these problems. Out of this diverse mix, our StanCE consortium was born.”

The StanCE consortium brings together leading researchers from the United States, Germany, Japan and Canada to address industrial, technological and environmental issues facing this transition to a sustainable chemical infrastructure.

The interaction between Johannes Gutenberg University and UA already has seen a number of successful transatlantic personnel exchanges, which serve to strengthen the technological underpinnings of the collaboration while providing participants with educational and cultural opportunities.

In addition to the educational, technological and cultural benefits derived through the StanCE consortium, this developing technology offers a great potential economic benefit to the wood industry.

The first results from StanCE collaborations on Xylochemistry were published on Friday, Oct. 16, by the Tuscaloosa and Mainz groups in the journal Angewandte Chemie, or Applied Chemistry (DOI: 10.1002/anie.201508500).

UA’s department of chemistry is part of the College of Arts and Sciences, the University’s largest division and the largest liberal arts college in the state. Students from the College have won numerous national awards including Rhodes Scholarships, Goldwater Scholarships, Truman Scholarships and memberships on the USA Today Academic All American Team.