Workers Do Not Quit Due To Mandatory Flu Shot 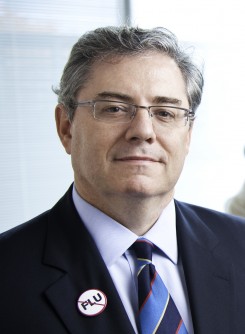 Newswise — Mandatory influenza (flu) vaccination, as a condition of employment, does not lead to excessive voluntary termination, according to a four-year analysis of vaccination rates at Loyola University Health System in Chicago.

“First do no harm is our mandate as health care workers,” said Jorge Parada, MD, MPH, FACP, FIDSA, study author and professor of medicine at Loyola University Chicago Stritch School of Medicine. “We have a fiduciary responsibility to perform hand hygiene and adhere to contact precautions, and flu vaccines should be considered in the same vein – meaning we should do all we can to not pass along illness to our patients.” Loyola has sustained a 99 percent compliance average since adopting the mandatory flu vaccination protocol four years ago.

Flu infections result in approximately 150,000 hospital admissions and 24,000 deaths annually. The Centers for Disease Control and Prevention (CDC) recommends that all healthcare personnel receive the annual flu vaccine, yet the national average for vaccination of health care professionals is only 64 percent.

“Just as construction workers must wear steel-toed boots and hard hats on job sites as a condition of employment, we believe that healthcare workers should get a flu shot to work in a hospital,” said Parada, who leads the vaccination program at Loyola.

Infection prevention specialists worked with a multidisciplinary task force at Loyola to develop a facility-wide policy that made flu vaccination a condition of employment. Parada presented his study of the four-year program on June 9, 2013 at the annual conference of the Association for Professionals in Infection Control and Epidemiology.

As one of the first medical centers in the country to implement mandatory flu vaccination, Loyola began with the full backing of the hospital’s senior leadership. “Starting in 2008, staff were no longer simply not allowed to not bother to get influenza vaccination, instead they were required by employee health to state “yes” or “no” when asked to be vaccinated and provide reasoning for why they declined the vaccine,” said Parada. This delineation brought Loyola’s overall vaccination rate up to 72 percent, well above the CDC’s goal of more than 60 percent of health care professionals vaccinated. “This was still well short of what we at Loyola felt we should achieve to maximize patient safety,” said Parada. “After all, this still meant more than one in four staff were not being immunized.”

In 2009 Loyola chose to mandate flu vaccination as a condition of employment, and extended this mandate to students, volunteers, and vendors. To support and encourage compliance, the center’s communications department developed facility-wide reminder emails and created short videos, which were displayed on flat screens throughout the hospital.

In the first year of their mandatory policy (2009/10 season), 99.2 percent of employees received the vaccine, 0.7 percent were exempted for religious/medical reasons, and 0.1 percent refused vaccination and chose to terminate employment. In 2012, four years later, the results have been sustained: 98.7 percent were vaccinated, 1.2 percent were exempted and 0.06 percent refused vaccination. “In reality our numbers were even better than that, of the 5 persons who refused vaccination in the mandatory period, 3 were unpaid volunteers, who later reconsidered, received vaccine and returned to Loyola. The two other persons were part-time staff, each with only 10% time commitment at Loyola…truly reflecting a 0.002 vaccine refusal rate” reports Parada. Over the course of four years, less than 15 staff, including volunteers, out of approximately 8,000 total chose termination over vaccination.

“Near universal flu immunization is achievable and sustainable with a mandatory vaccination policy,” said Parada. “Our employees and associates now understand that this is the way Loyola does business and we believe that patient safety has been enhanced as a result.”

Association for Professionals in Infection Control and Epidemiology