Analysis of more than ten million workplace drug test results shows increases in marijuana positivity across nearly all employee testing categories. Increases in post-accident positivity in the general U.S. workforce outpace those for all other testing reasons, including pre-employment screening

SECAUCUS, N.J., April 11, 2019 /PRNewswire/ -- The rate of workforce drug positivity hit a fourteen-year high in 2018, according to a new analysis released today by Quest Diagnostics (NYSE: DGX), the world's leading provider of diagnostic information services. Positivity rates in the combined U.S. workforce increased nearly five percent in urine drug tests (4.2% in 2017 versus 4.4% in 2018), climbing to the highest level since 2004 (4.5%) and are now more than 25 percent higher than the thirty-year low of 3.5 percent recorded between 2010 and 2012. 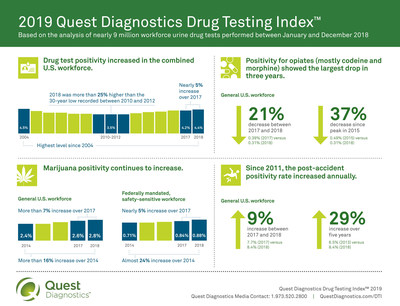 The new findings of the Quest Diagnostics Drug Testing Index™ were unveiled today at the Drug and Alcohol Testing Industry Association (DATIA) annual conference in Chicago.

For an interactive map with positivity rates and trend lines by three-digit zip code in the United States, visit DTIDrugMap.com.

"Our in-depth analysis shows that marijuana is not only present in our workforce, but use continues to increase," said Barry Sample, PhD, senior director, science and technology, Quest Diagnostics. "As marijuana policy changes, and employers consider strategies to protect their employees, customers and general public, employers should weigh the risks that drug use, including marijuana, poses to their business."

Barry Sample, PhD, senior director of science & technology at Quest Diagnostics, and Kimberly Samano, PhD, scientific director at Quest Diagnostics will share the latest data and analysis from the Drug Testing Index via a live webcast on Tuesday, April 16, 2019 at 11 a.m. EDT. Click here to register and attend.

Marijuana continues to top the list of the most commonly detected illicit substances across all workforce categories (general U.S. workforce; federally mandated, safety-sensitive workforce; and combined U.S. workforce, which includes the prior two populations) and specimen types (urine, oral fluid, and hair).

In the general U.S. workforce, the positivity rate for opiates in urine drug testing declined across all opiate categories. Among the general workforce screening for opiates (mostly codeine and morphine), positivity declined nearly 21 percent between 2017 and 2018 (0.39% versus 0.31%), the largest drop in three years and nearly 37 percent decrease since the peak in 2015 (0.49%). Among the more specific tests for other prescription opiates, the positivity for the semi-synthetic opiates (hydrocodone and/or hydromorphone) declined two percent between 2017 and 2018 (0.51% vs. 0.50%) and 43 percent since the five-year high in 2014 (0.88%). Similarly, the positivity for oxycodones (oxycodone and/or oxymorphone) declined more than 29 percent between 2017 and 2018 (0.61% vs. 0.43%) and more than 46 percent since the five-year high in 2014 (0.80%).

Changes to Federal rules for drug testing the federally mandated, safety-sensitive workforce went into effect in January 2018. The addition of four semi-synthetic opiates contributed to the large increases in year-over-year positivity among those workers. In 2018, testing for semi-synthetic opiates (hydrocodone and/or hydromorphone) and for oxycodones (oxycodone and/or oxymorphone), the positivity rate was 0.45 percent and 0.34 percent, respectively. These positivity rates are both slightly less than general U.S. workforce testing.

Increases in post-accident positivity occur in both the federally mandated, safety-sensitive and, general U.S. workforce

"Increases in post-accident positivity among safety-sensitive workers should serve as a warning to employers that employee drug use may increase the risk of workforce accidents or injuries," said Kimberly Samano, PhD, scientific director, Quest Diagnostics. "Our analysis suggests that employers committed to creating a safe, drug-free work environment should incorporate strategies that monitor drug use above and beyond pre-employment drug screening."

Findings show an increased percentage of urine specimens in both the federally mandated, safety-sensitive and general U.S. workforces reported as invalid due to inconsistency with normal human urine, suggesting attempts at specimen adulteration or substitution. Between 2017 and 2018, the percentage of invalid results in the federally mandated, safety-sensitive workforce jumped 80 percent (0.15% versus 0.27%), and 40 percent in the general U.S. workforce (0.15% versus 0.21%).

The Quest Diagnostics Drug Testing Index™ (DTI) is a series of reports that provide insights into trends in workforce drug use, based on positivity results for de-identified laboratory testing performed by Quest Diagnostics for a range of illicit, legal and prescription drugs. It examines test results according to three categories of workers: federally mandated, safety-sensitive workers; the general workforce; and the combined U.S. workforce. Federally mandated, safety-sensitive workers include pilots, bus and truck drivers, and workers in nuclear power plants, for whom routine drug testing is mandated by the U.S. Department of Health and Human Services. Quest Diagnostics has analyzed annual workplace drug testing data since 1988.

The strengths of the DTI analysis include its large, nationally representative sample size, longitudinal monitoring, a testing population that is generally reflective of the U.S. workforce and the quality of the company's drug testing services to confirm positive results. Limitations include analysis only of employers that perform drug testing with the company, and a lack of exact cross-specimen comparisons due to variations in substances for which employers test. Quest Diagnostics has analyzed annual workplace drug testing data since 1988 and publishes the findings as a public service.

In addition to workplace drug testing, Quest is a leader in clinician-ordered drug testing services through its Prescription Drug Monitoring program to aid the detection of potentially dangerous forms of prescription and illicit drug use. For more information on Quest's prescription drug monitoring services, visit QuestDrugMonitoring.com

About Quest Diagnostics
Quest Diagnostics empowers people to take action to improve health outcomes. Derived from the world's largest database of clinical lab results, our diagnostic insights reveal new avenues to identify and treat disease, inspire healthy behaviors and improve health care management. Quest annually serves one in three adult Americans and half the physicians and hospitals in the United States. Our 46,000 employees understand that, in the right hands and with the right context, our diagnostic insights can inspire actions that transform lives. www.QuestDiagnostics.com.