Fox2 News St. Louis coverage of the story from the May 5 newscast.

This January 2014 video demonstrates the team’s first prototype for its biomedical engineering senior design project at Washington University in St. Louis. The device is a prosthetic arm for anyone with a transradial limb difference (the arm distal to the elbow is absent). By moving the shoulder, the user controls digit flexion and extension. Vertical shoulder motions flex and extend all five digits, while horizontal shoulder movements flex and extend solely the thumb. 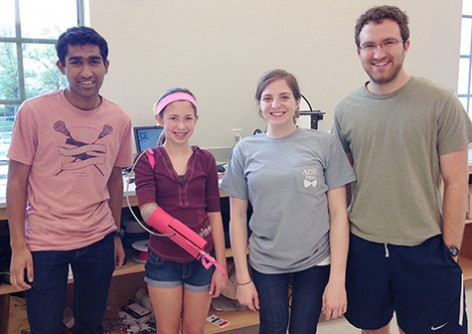 Newswise — Thirteen-year-old Sydney Kendall had one request for the Washington University in St. Louis students building her a robotic prosthetic arm: Make it pink.

Kendall Gretsch, Henry Lather and Kranti Peddada, seniors studying biomedical engineering in the School of Engineering & Applied Science, accomplished that and more. Using a 3-D printer, they created a robotic prosthetic arm out of bright-pink plastic. Total cost: $200, a fraction of the price of standard prosthetics, which start at $6,000.

“Currently, prosthetics are very expensive, and because kids keep growing, it is too costly for them to have the latest technology,” said Sydney’s mother, Beth Kendall. “With the 3-D printer, a prosthetic can be made much less expensive. The possibilities of what can be done to improve prosthetics using this technology is very exciting.”

Sydney lost her right arm in a boating accident when she was six years old. She learned to write with her left hand, but found most tasks difficult to accomplish with her prosthetic arm. Sydney said her new arm is easy to manipulate. By moving her shoulder, she can direct the arm to throw a ball, move a computer mouse and perform other tasks.

Peddada said it was thrilling to observe Sydney use her arm.

“It really showed us the great things you can accomplish when you bridge medicine and technology,” Peddada said.

The students developed the robotic hand as part of their engineering design course with Joseph Klaesner, PhD, associate professor of physical therapy at the School of Medicine. Several local medical practitioners, including orthopedic hand surgeons Charles A. Goldfarb, MD, and Lindley Wall, MD, both associate professors of orthopaedic surgery at the School of Medicine, served as mentors.

“They brought their engineering expertise, and we shared our practical experience with prosthetics and the needs of children,” Goldfarb wrote in a recent blog post about the project. “It was a valuable experience as Kendall, Henry and Kranti had no prosthetic experience and were able to think about the issues in a very different way.”As Goldfarb explained, the WUSTL student design offers two key design differences that set it apart from similar “Robohand” devices that have been invented recently — the motor and the working thumb.

This prosthetic is battery-powered and controlled with an accelerometer (like in the iPhone). The thumb moves with a slightly different trigger (compared with finger motion).

Prosthetic limbs are tricky for patients of any age, and especially for children, noted Goldfarb, because they’re still growing and need to move to larger-sized devices on a regular basis. Since prosthetics have no sensation, some kids are more comfortable making do with their existing natural limbs, he added.

While 3-D printers can cost about $2,500, they are capable of producing artificial limbs at a relatively low individual cost.

“These prosthetic hands are really exciting because they are inexpensive, can be remade when the child grows, and they do offer functional abilities,” he said.

Caption: Fox2 News St. Louis coverage of the story from the May 5 newscast.