Newswise — Rocky planets orbiting red dwarf stars may be bone dry and lifeless, according to a new study using NASA's Hubble Space Telescope. Water and organic compounds, essential for life as we know it, may get blown away before they can reach the surface of young planets.

This hypothesis is based on surprising observations of a rapidly eroding dust-and-gas disk encircling the young, nearby red dwarf star AU Microscopii (AU Mic) by Hubble and the European Southern Observatory's Very Large Telescope (VLT) in Chile. Planets are born in disks like this one.

Red dwarfs, which are smaller and fainter than our Sun, are the most abundant and longest-lived stars in the galaxy.

Fast-moving blobs of material appear to be ejecting particles from the AU Mic disk. If the disk continues to dissipate at this rapid pace, it will be gone in about 1.5 million years. In that short time, icy material from comets and asteroids could be cleared out of the disk. Comets and asteroids are important because they are believed to have seeded rocky planets such as Earth with water and organic compounds, the chemical building blocks for life. If this same transport system is needed for planets in the AU Mic system, then they may end up "dry" and dusty — inhospitable for life as we know it.

"The Earth, we know, formed 'dry,' with a hot, molten surface, and accreted atmospheric water and other volatiles for hundreds of millions of years, being enriched by icy material from comets and asteroids transported from the outer solar system," said co-investigator Glenn Schneider of Steward Observatory in Tucson, Arizona.

The observations are led by John Wisniewski of the University of Oklahoma in Norman, whose team is composed of 14 astronomers from the U.S. and Europe.

If the activity around AU Mic is typical of the planet-birthing process among red dwarfs, it could further reduce prospects of habitable worlds across our galaxy. Previous observations suggest that a torrent of ultraviolet light from young red dwarf stars quickly strips away the atmosphere of any orbiting planets. This particular star is only 23 million years old.

Surveys have shown that terrestrial planets are common around red dwarfs. In fact, they should contain the bulk of our galaxy's planet population, which could number tens of billions of worlds. Planets have been found within the habitable zone of several nearby red dwarfs, but their physical characteristics are largely unknown.

Blown Out by Blobs

Observations by Hubble's Space Telescope Imaging Spectrograph (STIS) and the VLT show that the AU Mic circumstellar disk is being excavated by fast-moving blobs of circumstellar material, which are acting like a snowplow by pushing small particles — possibly containing water and other volatiles — out of the system. Researchers don't yet know how the blobs were launched. One theory is that powerful mass ejections from the turbulent star expelled them. Such energetic activity is common among young red dwarfs.

"These observations suggest that water-bearing planets might be rare around red dwarfs because all the smaller bodies transporting water and organics are blown out as the disk is excavated," explained Carol Grady of Eureka Scientific in Oakland, California, co-investigator on the Hubble observations.

Conventional theory holds that billions of years ago Earth formed as a comparatively dry planet. Gravitationally perturbed asteroids and comets, rich in water from the cooler outer solar system, bombarded Earth and seeded the surface with ice and organic compounds. "However, this process may not work in all planetary systems," Grady said.

The team determined the disk's lifespan by using an estimated mass of the disk from an independent study, as well as calculating the mass of the escaping blobs in their STIS visible-light data. The mass of each blob is about four ten-millionths the mass of Earth. The disk's mass — about 1.7 times more massive than Earth — is based on data taken by the Atacama Large Millimeter/submillimeter Array (ALMA).

Although the mass of the wayward blobs seems tiny, the diameter of each blob could stretch at least from the Sun to Jupiter. At present, the team has spotted six outbound blobs, but it is possible that there is a continuous stream of them. Groups of blobs careening through the disk could sweep out material fairly quickly.

"The fast dissipation of the disk is not something I would have expected," Grady said. "Based on the observations of disks around more luminous stars, we had expected disks around fainter red dwarf stars to have a longer time span. In this system, the disk will be gone before the star is 25 million years old." She added that AU Mic likely started out with an outer rim of small icy bodies, like the Kuiper belt found within our own solar system. If the disk weren't being eroded, it would have provided ices to any dry inner planets.

Hubble astronomers spotted the blobs in STIS visible-light images taken in 2010-2011. As a follow-up to the Hubble study, the SPHERE (Spectro-Polarimetric High-contrast Exoplanet Research) instrument mounted on the European Southern Observatory's Very Large Telescope in Chile, made near-infrared observations. Features in the disk were hinted at in observations taken in 2004 by ground-based telescopes and Hubble’s Advanced Camera for Surveys.

So far, the team has uncovered blobs on the disk's southeast side, with estimated ejection speeds between 9,000 miles per hour and 27,000 miles per hour, fast enough to escape the star's gravitational clutches. They currently range in distance from roughly 930 million miles to more than 5.5 billion miles from the star.

Hubble is also showing that these blobs may not just be giant balls of dusty debris. The telescope has resolved substructure in one of the blobs, including a mushroom-shaped cap above the plane of the disk itself and a complex "loop-like" structure below the disk. "These structures could yield clues to the mechanisms that drive these blobs," Schneider said.

The system resides 32 light-years away in the southern constellation Microscopium.

"AU Mic is ideally placed," Schneider said. "But it is only one of about three or four red-dwarf systems with known starlight-scattering disks of circumstellar debris. The other known systems are typically about six times farther away, so it's challenging to conduct a detailed study of the types of features in those disks that we see in AU Mic."

However, astronomers are beginning to identify some possibly similar activity in these other systems. "It shows that AU Mic is not unique," Grady said. "In fact, you could argue that because it is one of the nearest systems of this type, it would be unlikely that it would be unique."

Grady will present the team's results at a press conference Jan. 8, 2019, at the 233rd meeting of the American Astronomical Society in Seattle, Washington. 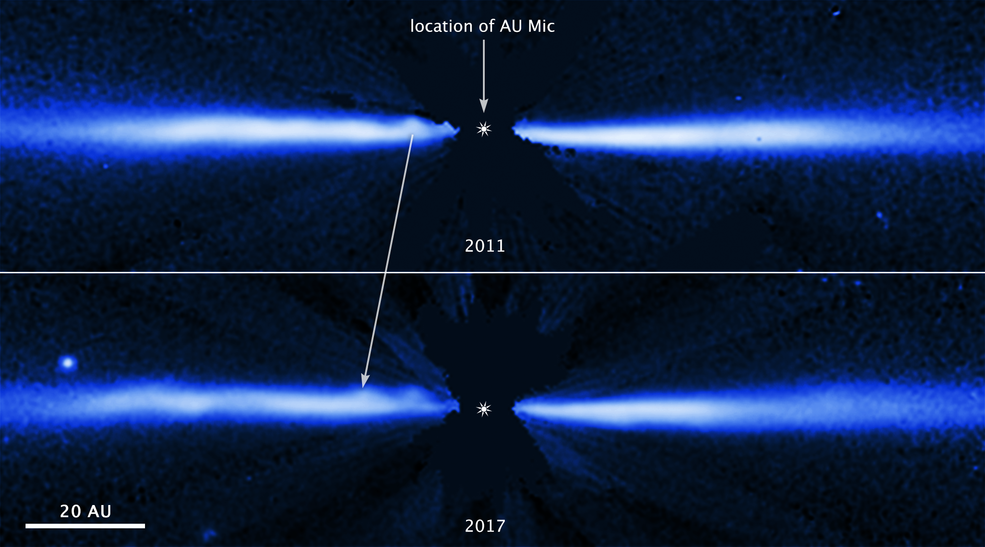 Caption: These two NASA Hubble Space Telescope images, taken six years apart, show fast-moving blobs of material sweeping outwardly through a debris disk around the young, nearby red dwarf star AU Microscopii (AU Mic). Red dwarfs are the most abundant and longest-lived stars in our Milky Way galaxy. AU Mic is approximately 23 million years old. The top image was taken in 2011; the bottom in 2017. Hubble's Space Telescope Imaging Spectrograph (STIS) took the images in visible light. This comparison of the two images shows the six-year movement of one of the known blobs (marked by an arrow). Researchers estimate that the blob, which is zipping along at nearly 15,000 miles an hour, traveled more that 820 million miles between 2011 and 2017. That is about the distance from Earth to Saturn. Astronomers do not know how the blobs are launched through the system. Eventually, the blob highlighted in the image will sweep through the disk, escape the star's gravitational grip, and race out into space. Astronomers expect the string of blobs to clear out the disk within 1.5 million years. Their estimated ejection speeds are between 9,000 miles per hour and 27,000 miles per hour, fast enough to escape the star's gravitational clutches. They currently range in distance from roughly 930 million miles to more than 5.5 billion miles from the star. The disk, seen edge-on, is illuminated by scattered light from the star. The glare of the star, located at the center of the disk, has been blocked out by the STIS coronagraph so that astronomers can see more structure in the disk. The bright dot above the left side of the disk in the 2017 image is a background star. The system resides 32 light-years away in the southern constellation Microscopium.

Caption: The Hubble Space Telescope image on the left is an edge-on view of a portion of a vast debris disk around the young, nearby red dwarf star AU Microscopii (AU Mic). Though planets may have already formed in the disk, Hubble is tracking the movement of several huge blobs of material that could be "snowplowing" remaining debris out of the system, including comets and asteroids. The box in the image at left highlights one blob of material extending above and below the disk. Hubble's Space Telescope Imaging Spectrograph (STIS) took the picture in 2018, in visible light. The glare of the star, located at the center of the disk, has been blocked out by the STIS coronagraph so that astronomers can see more structure in the disk. The STIS close-up image at right reveals, for the first time, details in the blobby material, including a loop-like structure and a mushroom-shaped cap. Astronomers expect the train of blobs to clear out the disk within only 1.5 million years. The consequences are that any rocky planets could be left bone-dry and lifeless, because comets and asteroids will no longer be available to glaze the planets with water or organic compounds. AU Mic is approximately 23 million years old. The system resides 32 light-years away in the southern constellation Microscopium.