Global sentiments towards COVID-19 shifts from fear to anger

Newswise — The fear that people developed at the start of the COVID-19 outbreak has given way to anger over the course of the pandemic, a study of global sentiments led by Nanyang Technological University, Singapore (NTU Singapore) has found.

In an analysis of over 20 million tweets in English related to the coronavirus, an international team of communication researchers observed that tweets reflecting fear, while dominant at the start of the outbreak due to the uncertainty surrounding the coronavirus, have tapered off over the course of the pandemic.

Xenophobia was a common theme among anger-related tweets, which progressively increased, peaking on 12 March - a day after the World Health Organisation declared the COVID-19 outbreak a pandemic. The anger then evolved to reflect feelings arising from isolation and social seclusion.

Accompanying this later shift is the emergence of tweets that show joy, which the researchers say suggested a sense of pride, gratitude, hope, and happiness. Tweets that reflected sadness doubled, although they remain proportionally lower than the other emotions.

The rapid evolution of global COVID-19 sentiments within a short period of time points to a need to address increasingly volatile emotions through strategic communication by government and health authorities, as well as responsible behaviour by netizens before they give rise to "unintended outcomes", said Professor May O. Lwin of NTU's Wee Kim Wee School of Communication and Information.

Prof Lwin, who led the team representing four countries, said: "Worldwide, strong negative sentiments of fear were detected in the early phases of pandemic but by early April, these emotions have gradually been replaced by anger. Our findings suggest that collective issues driven by emotions, such as shared experiences of distress of the COVID-19 pandemic including large-scale social isolation and the loss of human lives, are developing.

"If such overbearing public emotions are not addressed through clear and decisive communication by authorities, citizen groups and social media stakeholders, there is potential for the emergence of issues such as breeding mistrust in the handling of the disease, and a belief in online falsehoods that could hinder the ongoing control of the disease."

The study was published in the scientific journal JMIR Public Health & Surveillance in May.

A glimmer of hope and gratitude amidst anger

To identify trends in the expression of the four basic emotions - fear, anger, sadness, and joy - and examine the narratives underlying those emotions, Prof Lwin and her team first collected 20,325,929 tweets in English containing the keywords 'Wuhan', 'corona', 'nCov', and 'covid'.

The tweets, collected from late January to early April at the Institute of High Performance Computing in Agency for Science, Technology and Research (A*STAR) using Twitter's standard search application interface programme, came from over 7 million unique users in more than 170 countries.

"Although the data looks at only public tweets surrounding the four selected keywords, the results are sufficient to start a conversation about possible issues arising from the pandemic at present," said Prof Lwin, whose collaborators also include Tianjin University, University of Lugano, and University of Melbourne.

The underlying emotions of tweets were then analysed using an algorithm developed by A*STAR, whose accuracy has been demonstrated in previous studies. Word clouds based on the top single words and two-word phrases were generated for each of the four emotions.

Upon analysing the results, the team found that words such as 'first case' and 'outbreak' were among the most-used words in tweets from late January, indicating fear that was possibly related to the emerging coronavirus and the unknown nature of it, causing uncertainty about containment and spread.

Xenophobia was also reflected at the start of the pandemic, when the disease was predominantly contained in China and Asia, as indicated by words such as 'racist' and 'Chinese people'.

As the pandemic escalated, fears around shortages of COVID-19 diagnostic tests and medical supplies emerged, as suggested by words such as 'test shortages' and 'uncounted'. Anger then shifted to discourses around the isolation fatigue that can occur from social seclusion, indicated by words such as "stay home" and several swear words.

Signs of sadness surrounding the topics of losing friends and family members also started to surface, with words relating to 'loved one' and 'passed away' highlighting potential social concerns arising from personal traumatic experiences of the pandemic.

But accompanying these negative emotions were parallel escalating sentiments of joy relating to national pride, gratitude, and community spirit, the NTU-led team found, with words such as 'thank', 'good news' and 'feel good'.

Tweets that were collected and analysed from early April to mid-June as an extension of the JMIR study also showed that these positive sentiments exceeded fear postings on social media.

Upcoming follow-up studies led by Prof Lwin will dive into country-specific trends in public emotions. Preliminary findings show that in Singapore, there is a moderate balance of positive sentiments relating to resilience, civic pride, and celebration of heroic acts and acts of kindness. This is in contrast to other countries where strong negative emotions overwhelmingly feature in the social media posts.

This work is funded by A*STAR and the National Research Foundation Singapore under the COVID-19 Research Fund, administered by the Singapore Ministry of Health's National Medical Research Council.

Ranked amongst the world's top universities by QS, NTU has also been named the world's top young university for the past seven years. The University's main campus is frequently listed among the Top 15 most beautiful university campuses in the world and it has 57 Green Mark-certified (equivalent to LEED-certified) building projects, of which 95% are certified Green Mark Platinum.

Apart from its main campus, NTU also has a campus in Singapore's healthcare district.

Caption: Graph showing the evolving public emotions over the course of the COVID-19 pandemic based on tweets. The figure provided is an extended version of the data published to include more recent data from the months of May and June. 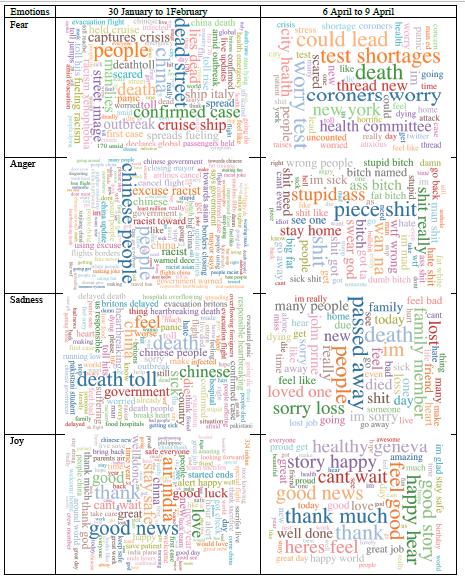