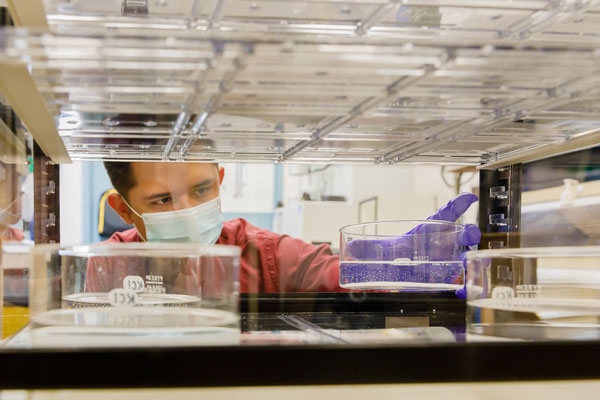 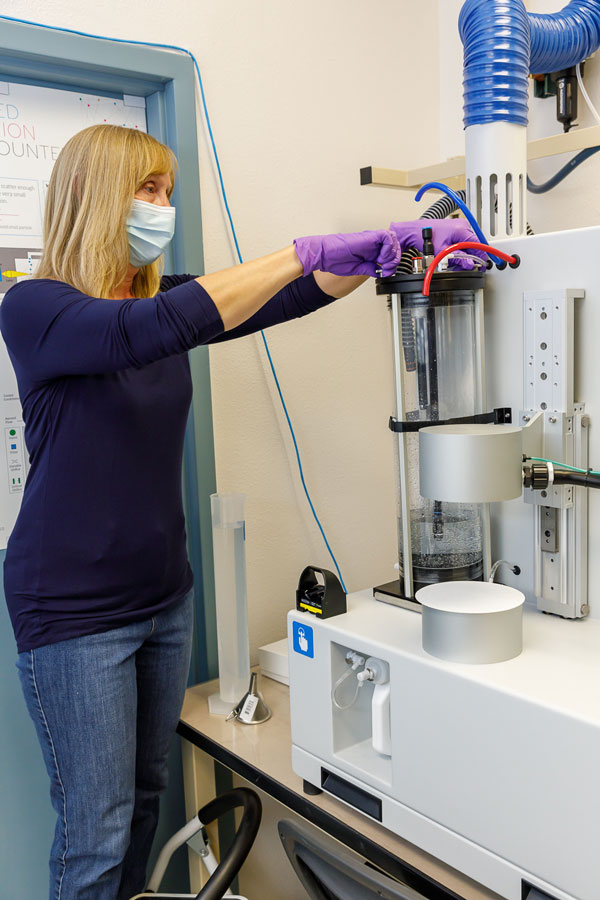 Newswise — ALBUQUERQUE, N.M. — A media comprised of a sandwich of materials, tested by Sandia National Laboratories, is being manufactured into N95-like respirators that could be used in local medical facilities. The project originated from the urgent need for personal protective equipment when the COVID-19 outbreak began.

“I can almost assure you that no one else in the country is making respirators the way we’re making them,” said Dave Mayberry, technical lead for Marpac, Sierra Peaks and Sew-EZ, the companies that worked with Sandia on materials testing. “We didn’t want to research the same materials already used in the typical N95 supply chain due to availability issues, so we looked into other materials we could get ahold of that seemed most likely to meet the filtration requirements.”

Marpac, Sierra Peaks and Sew-EZ were matched with Sandia scientists through the New Mexico Small Business Assistance program that pairs Sandia and Los Alamos national laboratories with companies seeking help to solve technical problems. Sandia worked on a project with each company.

“It’s been very satisfying to see NMSBA, a state program, help New Mexico businesses address COVID-19 issues,” said Jackie Kerby Moore, manager of technology and economic development at Sandia. “It was also rewarding to see the Sandia team jump on the opportunity to help these three businesses with their respirators.”

Mayberry reached out to Sandia after receiving an inquiry from a local hospital to see if the company could help address the potential shortage of N95 respirators. Certified N95 respirators are worn like masks and protect users from 95% of airborne particles and liquid contamination.

Sandia has the equipment and expertise to help, and within a few days after Marpac reached out, a team of scientists began working on the challenging task of modifying systems to make sure samples were tested properly.

Sandia principal investigator Michael Omana said the team modified aerosol and filtration systems typically used for nuclear nonproliferation work. They had to reduce the systems’ airflow significantly to mimic the rate that humans breathe. They also modified existing test boxes to quickly mount and seal the samples inside prior to running them through the testbed.

“We were tapped about the first project with Marpac on a Thursday and drafted the scope of work and contract by Friday,” Omana said. “By Monday or Tuesday, we had finished all system modifications. Initial testing of the first set of materials was completed by the end of the week, and data was provided to Marpac.”

Initial test materials underperformed, with the best sample coming within 10% of the desired filtration levels. Within a couple of weeks, the researchers started seeing promising results from new material compositions. Creativity in combining materials resulted in samples with protection levels comparable to N95 respirators.

Marpac manufactured 500 N95-like respirators using the materials Sandia tested, and Mayberry said they passed fit tests at a local hospital. They’re also looking into additional medical facilities that could use the product.

“We feel fortunate that the local hospital provider came to us after seeing our capabilities,” Mayberry said. “This definitely stretched us out of our comfort zone, and certainly without the technical support from Sandia Labs, this would have been hard to validate all the types of materials that would be likely constructed into a respirator.”

Working quickly was critical for the projects, Sandia distinguished technologist Dora Wiemann said, and the team put in long hours — including on weekends.

The projects with each company built upon each other. For the first project with Marpac, researchers tested sheets of composite materials provided by the company in the large, modified filtration system.

For the second project with Sierra Peaks, additional test-box modifications enabled the scientists to mount and seal samples cut in respirator geometries, and to complete comparison studies against certified N95 respirators.

The third project with Sew-EZ, which is ongoing, involves further sample testing using the filtration system and an additional commercial-off-the-shelf system, which is typically used by industry to certify products like N95 respirators.

“Sandia is not a certification lab, but the joint use of the systems enabled us to provide data that may be compared against products which have been certified through traditional avenues,” Omana said. “This data will help the company if it chooses to seek certification of its product through the proper organizations.”

Omana and a couple of other researchers test the materials in the lab, then forward data to be processed into quantitative results. The timeline on all projects has been tight, but the researchers said promising tests have been rewarding, especially because the result has the potential to help people during a time of crisis.

“I’m glad to be in the position I am so that I can help with this really big issue with characterizing materials that can be used for N95 replacements,”  Wiemann said. “By the end of the initial modifications and testing, we were a very close-knit team, solving an important problem. It was exhausting and exhilarating.”