Scans of a stroke patient's brain show the area where tissue has died (magenta) and where tissue is damaged but may still be saved with prompt intervention (green). A study from Washington University School of Medicine in St. Louis has found that stroke evaluations fell by nearly 40% during a period of the COVID-19 pandemic, suggesting that many stroke patients are not seeking potentially life-saving medical treatment.

Newswise — The number of people evaluated for signs of stroke at U.S. hospitals has dropped by nearly 40% during the COVID-19 pandemic, according to a study led by researchers from Washington University School of Medicine in St. Louis who analyzed stroke evaluations at more than 800 hospitals across 49 states and the District of Columbia. The findings, published May 8 in The New England Journal of Medicine, are a troubling indication that many people who experience strokes may not be seeking potentially life-saving medical care.

“Our stroke team has maintained full capacity to provide emergency stroke treatment at all times, even during the height of the pandemic,” said lead author Akash Kansagra, MD, an assistant professor of radiology at Washington University’s Mallinckrodt Institute of Radiology (MIR). Kansagra sees stroke patients at Barnes-Jewish Hospital. “Nevertheless, we have seen a smaller number of stroke patients coming to the hospital and some patients arriving at the hospital after a considerable delay. It is absolutely heartbreaking to meet a patient who might have recovered from a stroke but, for whatever reason, waited too long to seek treatment.”

Nearly 800,000 people in the U.S. experience a stroke every year. It is the fifth leading cause of death and the leading cause of long-term disability. With advances in stroke care such as better diagnostic tools, surgeries to remove blood clots or repair broken blood vessels, and clot-busting drugs, people have a better chance of recovering from a stroke today than ever before – as long as they receive treatment promptly. Clot-busting drugs are generally safe only within 4½ hours of symptom onset, and surgeries are only possible within 24 hours of symptom onset. The earlier the treatment is started, the more successful it is likely to be.

Worried by the low numbers of stroke patients being evaluated at Barnes-Jewish Hospital and hearing similar reports from colleagues at other institutions, Kansagra – along with co-authors Manu Goyal, MD, a Washington University assistant professor of radiology and neurology, and statistician Scott Hamilton, PhD, and neurologist Gregory Albers, MD, both of Stanford University – set out to determine how pervasive the problem was.

When patients arrive at a hospital and are showing signs of a stroke, they often get a brain scan so doctors can identify what kind of stroke has occurred and choose the most effective treatment. Many hospitals, including Barnes-Jewish Hospital, use software known as RAPID to analyze such brain scans. Kansagra and colleagues assessed how often the software was used in February, before the pandemic, and during a two-week period from March 26 to April 8, when much of the country was under shelter-in-place orders.

“Across the board, everybody is affected by this decrease,” said Kansagra, who is also an assistant professor of neurosurgery and of neurology. “It is not limited to just hospitals in urban settings or rural communities, small hospitals or large hospitals. It is not just the old or the young or the people with minor strokes who aren’t showing up. Even patients with really severe strokes are seeking care at reduced rates. This is a widespread and very scary phenomenon.”

There’s no reason to believe people suddenly stopped having strokes. And the drop was large even in places where COVID-19 cases were few and hospitals were not overwhelmed, so patients should not have found it unusually difficult to obtain treatment.

“I suspect we are witnessing a combination of patients being reluctant to seek care out of fear that they might contract COVID-19, and the effects of social distancing,” Kansagra said. “The response of family and friends is really important when a loved one is experiencing stroke symptoms. Oftentimes, the patients themselves are not in a position to call 911, but family and friends recognize the stroke symptoms and make the call. In an era when we are all isolating at home, it may be that patients who have strokes aren’t discovered quickly enough.”

Common signs of a stroke include the sudden onset of numbness or weakness in the face, arm or leg, especially on one side of the body; speech difficulty; confusion; difficulty seeing or walking; and severe headache.

Even during a pandemic, it is critically important for people who may be experiencing a stroke to receive care immediately, Kansagra said. The risk of delaying care for a stroke is much greater than the risk of contracting COVID-19.

“The effect of coming in too late is the same in many respects as not coming in at all,” Kansagra said. “When patients come in too late, they may no longer be candidates for treatments that they would have qualified for just hours before. And as a result, they may not have access to treatments that are extremely effective in reducing death and disability.”

New England Journal of Medicine, May-2020

Differences in lung physiology and immune function in children could be why they are more often spared from severe illness associated with COVID-19 than adults, according to pediatric and adult physicians at UTHealth and Baylor College of Medicine, who teamed up to investigate the disparity.

A reporter's PressPass is required to access this story until the embargo expires on 8-Jul-2020 8:30 AM EDT The Newswise PressPass gives verified journalists access to embargoed stories. Please log in to complete a presspass application. If you have not yet registered, please Register. When you fill out the registration form, please identify yourself as a reporter in order to advance to the presspass application form.

As communities across the nation begin the reopening process stemming from the coronavirus (COVID-19) pandemic, the American Cleaning Institute (ACI) announced the roll-out of Healthy Returns, a free online toolkit for small businesses and offices containing concise, easy to understand reminders on hygiene, cleaning and disinfecting that are crucial to keeping the workplace healthy and safe.

A reporter's PressPass is required to access this story until the embargo expires on 10-Jul-2020 1:00 AM EDT The Newswise PressPass gives verified journalists access to embargoed stories. Please log in to complete a presspass application. If you have not yet registered, please Register. When you fill out the registration form, please identify yourself as a reporter in order to advance to the presspass application form.

The First Amendment Clinic at Cornell Law School, working on behalf of its client, The New York Times, helped secure the release of previously unseen data that provides the most detailed look yet at nearly 1.5 million American coronavirus patients from 974 counties across the country.

In response to the COVID-19 pandemic, UCLA Mattel Children’s Hospital launched an innovative project to support the emotional needs of children through a new AI powered robot. Robin’s technology enables the robot to build what is called associative memory — it recognizes a child’s emotions by interpreting his or her facial expressions and builds responsive dialogue by replicating patterns formed from previous experiences.

Findings from an online survey of more than 53,000 American adults suggest that using heartburn medications known as proton pump inhibitors (PPIs) once or twice daily significantly increases the odds of a positive test for COVID-19 compared to those who do not take PPIs. This research appeared online July 7, 2020 in pre-print format in The American Journal of Gastroenterology.

Discrimination against people thought to be infected with coronavirus was experienced by a rising number of United States residents, particularly racial minorities, in the early stages of the COVID-19 pandemic, according to a new study from the USC Dornsife College of Letters, Arts and Sciences. 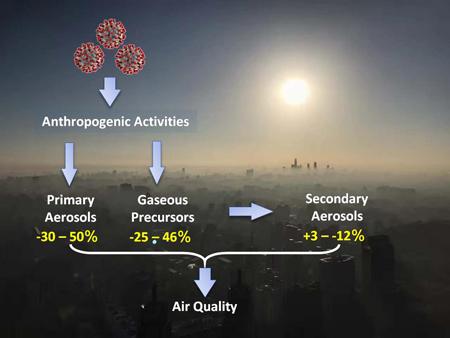 A chemical cocktail of air pollution in Beijing, China during COVID-19 outbreak