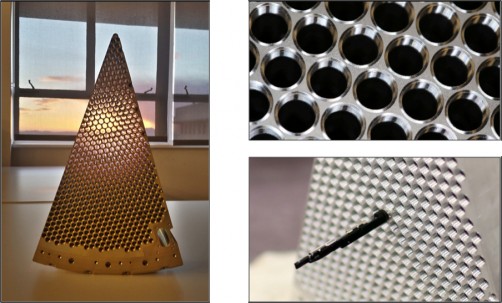 The first “petal” machined for the Dark Energy Spectroscopic Instrument (DESI) is shown in these photos. Ten of these petals, which together will hold 5,000 robots (like the one in the lower right photo)—each pointing a thin fiber-optic cable at separate sky objects—will be installed in DESI. 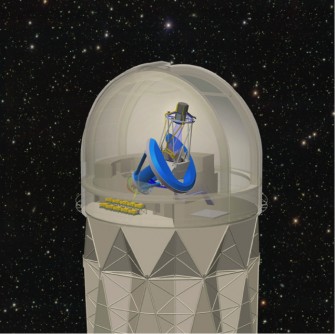 The Dark Energy Spectroscopic Instrument (DESI), shown in this illustration, will be mounted on the 4-meter Mayall telescope at Kitt Peak National Observatory near Tucson, Ariz. It will collect data on light from 35 million galaxies and quasars to make the biggest 3-D map of the universe ever. 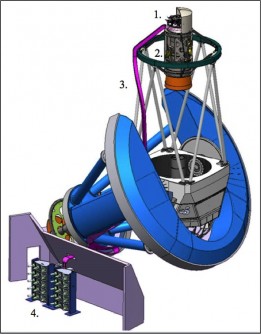 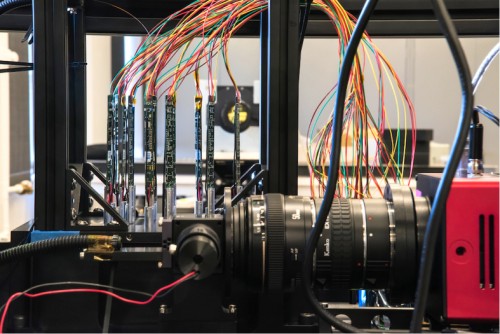 A view of the ProtoDESI setup during assembly at Berkeley Lab, with the underside of the robotic fiber-positioners visible at left. ProtoDESI is now installed at the 4-meter Mayall Telescope at Kitt Peak National Observatory near Tucson, Ariz.

Newswise — A 3-D sky-mapping project that will measure the light of millions of galaxies has received formal approval from the U.S. Department of Energy to move forward with construction. Installation of the project, called DESI (Dark Energy Spectroscopic Instrument), is set to begin next year at the Nicholas U. Mayall 4-meter telescope at Kitt Peak National Observatory near Tucson, Ariz., with observations starting up in January 2019.

This latest DOE approval step, known as Critical Decision 3, triggers spending for major components of the project, including the remainder of the 5,000 finger-width, 10-inch-long cylindrical robots that will precisely point the fiber-optic cables to gather the light from a chosen set of galaxies, stars, and brilliant objects called quasars. The spending will also be used to complete the set of 10 fiber-fed spectrographs that will precisely measure different wavelengths of incoming light.

This light will tell us about the properties of the galaxies, stars, and quasars, and most importantly, how quickly they are moving away from us—light from objects that are moving away from us is shifted to redder wavelengths (“redshift”). These details can help us learn more about the nature of dark energy that is driving the accelerating expansion of the universe. DESI’s observations will provide a deep look back in time, up to about 11 billion years ago.

“This brings DESI closer to its five-year mission to go where no map has gone before in the universe,” added David Schlegel of Berkeley Lab, a co-project scientist for DESI. “I can’t wait.”

DESI’s robotic array will cycle through separate sets of objects several times each hour during its five-year mission. It will look at one-third of the sky and will capture more than 10 times as much data as a predecessor called BOSS, the Baryon Oscillation Spectroscopic Survey.

DESI will provide a more detailed look at the patterned clustering of visible matter in the night sky across a larger range of distances. This clustering was set in motion by a cooling process in the early universe that produced sound wave-like oscillations through a combination of pressure and gravitational forces. DESI will also provide a more precise measure of how the universe has spread out over time, and help us understand galaxy evolution and dark matter, which is invisible but inferred from its gravitational effects on normal matter.

“The DESI map of galaxies will reveal patterns that result from the interplay of pressure and gravity in the first 400,000 years after the Big Bang,” said Daniel Eisenstein of Harvard University, a DESI co-spokesperson. “We’ll be using these subtle fingerprints to study the expansion history of the universe.”

The project’s multiple sources of financial support and its use of an existing telescope have helped to keep DESI on a fast track, Levi said. “Now the hard work accelerates,” he added.

With the latest approval, a pipeline of development efforts will move quickly toward completion. Six large lenses, each worth $1 million and measuring up to 1.1 meters in diameter, await treatment with an antireflective coating to improve their transparency.

The lenses will be housed in a metal frame being constructed at Fermi National Accelerator Laboratory (Fermilab) to form a minivan-sized stack known as an optical corrector. This device will be the first piece of equipment installed at the Mayall Telescope for DESI in 2018.

Also, three sky surveys are now collecting images of the faint galaxies that DESI will target. Data from these surveys is periodically released on a public site at http://legacysurvey.org, and observational data gathered by DESI will also be publicly released.

“I like to think of the imaging surveys as building the 2-D maps, while DESI adds the third dimension,” said Dustin Lang, a DESI imaging scientist with the University of Toronto. ”The crucial third dimension allows us to measure how galaxies cluster together in space over the history of the universe.”

A prototype instrument called ProtoDESI has been installed at the Mayall Telescope for a two-month run. ProtoDESI will use four small robots to test out the fiber-positioning system and includes cameras and other components to prepare for the full DESI project.

“This is a great time to be an astroparticle physicist. DOE’s program of building new instruments like DESI will provide the data that will let us take the next step in understanding the formation of our universe,” said Fermilab’s Brenna Flaugher, co-project scientist for DESI and project manager of DECam, the camera for the Dark Energy Survey, an ambitious imaging survey currently underway.

DESI is one of several planned next-generation observatory projects designed to confront cosmic mysteries including dark energy, dark matter, and the universe’s first light, known as the cosmic microwave background.

“DESI will be able to make a 3D map of the universe using an order of magnitude more redshifts than currently exist,” said Risa Wechsler of the SLAC National Accelerator Laboratory, Stanford University and DESI co-spokesperson. “This will allow us to probe the physics of the universe and discover the true nature of dark energy.”

DESI is supported by the U.S. Department of Energy’s Office of Science; additional support for DESI is provided by the U.S. National Science Foundation, Division of Astronomical Sciences under contract to the National Optical Astronomy Observatory; the Science and Technologies Facilities Council of the United Kingdom; the Gordon and Betty Moore Foundation; the Heising-Simons Foundation; the National Council of Science and Technology of Mexico; the Ministry of Economy of Spain, and DESI member institutions. The DESI scientists are honored to be permitted to conduct astronomical research on Iolkam Du’ag (Kitt Peak), a mountain with particular significance to the Tohono O’odham Nation.

Established in 2007 by Mark Heising and Elizabeth Simons, the Heising-Simons Foundation (www.heisingsimons.org) is dedicated to advancing sustainable solutions in the environment, supporting groundbreaking research in science, and enhancing the education of children.The Gordon and Betty Moore Foundation, established in 2000, seeks to advance environmental conservation, patient care and scientific research. The Foundation’s Science Program aims to make a significant impact on the development of provocative, transformative scientific research, and increase knowledge in emerging fields. For more information, visit www.moore.org.

The Science and Technology Facilities Council (STFC) of the United Kingdom coordinates research on some of the most significant challenges facing society, such as future energy needs, monitoring and understanding climate change, and global security. It offers grants and support in particle physics, astronomy and nuclear physics, visit http://www.stfc.ac.uk. 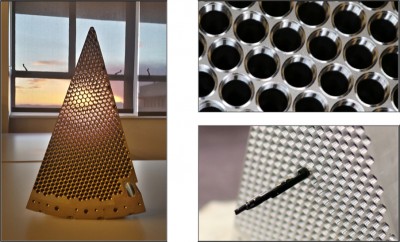 Caption: The first “petal” machined for the Dark Energy Spectroscopic Instrument (DESI) is shown in these photos. Ten of these petals, which together will hold 5,000 robots (like the one in the lower right photo)—each pointing a thin fiber-optic cable at separate sky objects—will be installed in DESI. 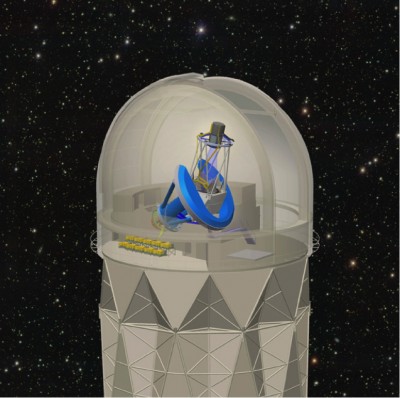 Caption: The Dark Energy Spectroscopic Instrument (DESI), shown in this illustration, will be mounted on the 4-meter Mayall telescope at Kitt Peak National Observatory near Tucson, Ariz. It will collect data on light from 35 million galaxies and quasars to make the biggest 3-D map of the universe ever. 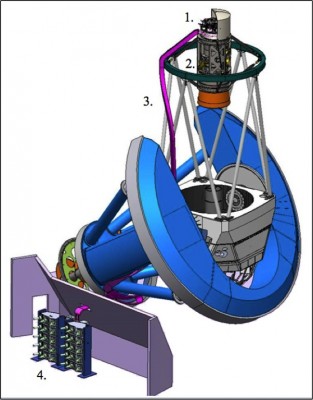 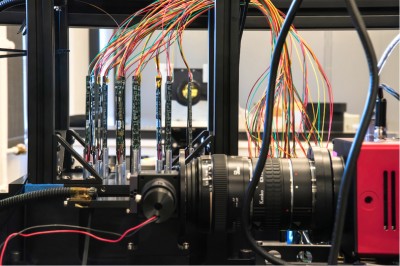 Caption: A view of the ProtoDESI setup during assembly at Berkeley Lab, with the underside of the robotic fiber-positioners visible at left. ProtoDESI is now installed at the 4-meter Mayall Telescope at Kitt Peak National Observatory near Tucson, Ariz.